Blasting through Pokemon Sword & Shield’s toughest battles is easier if you have a great team at your disposal. Here are the most overpowered Pokemon from the Galar Region Pokedex.

Picking a versatile squad for your journey has always been important in Pokemon games. Some Pokemon may not initially look like they’re worth having in your party, but with evolution that can all change.

Our guide identifies the Pokemon you need on your side in the latest Nintendo Switch games, and reveals how to get the most out of them. 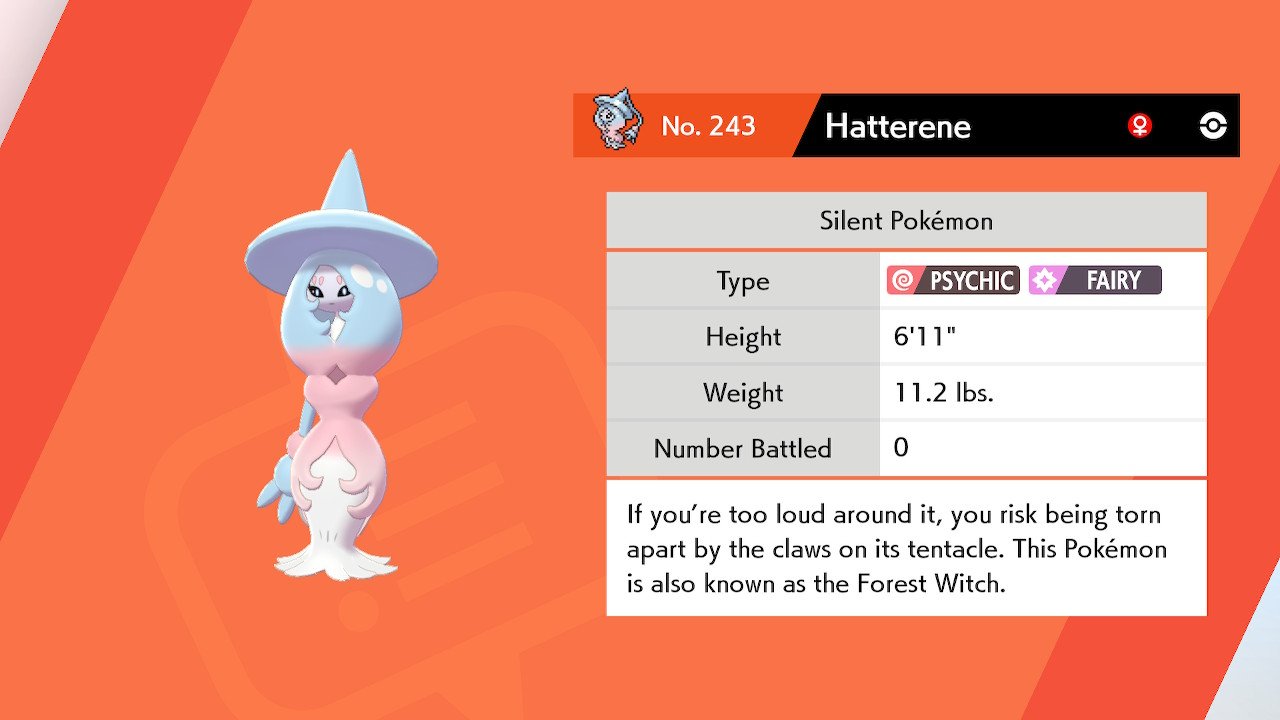 A Hatterene with Magic Bounce is way more threatening than it looks.

Hatterene is a new entry in the Generation VIII Pokedex, which – thanks to its Fairy/Psychic type – packs a powerful punch in battles if used properly

If you can find one with the Magic Bounce ability, it cranks up the power by an insane amount as it reflects the effect of all status conditions, stat-lowering moves, and entry hazard moves back onto its user.

Getting one with the ability is tough though, as it can only be found via Max Raids on a Dynamaxed version of the monster, but if you can obtain one, you’ll have a major advantage in battles. 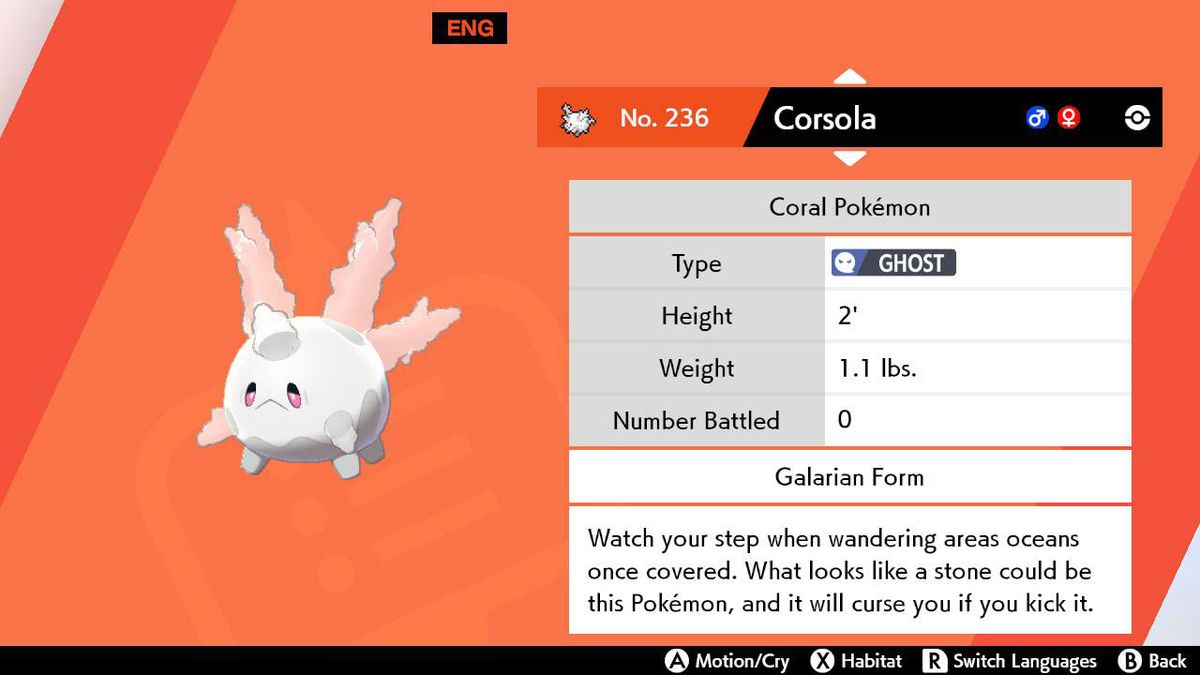 You’re gonna want to give your Corsola a Eviolite.

Ruby, Sapphire, and Emerald players will remember the original Corsola being introduced to the series in Generation III, but a whole new version came out with Sword & Shield – the Galarian variant.

While the Ghost type Pokemon evolves into Cursola, you might be surprised to learn that many players advise against changing its form. This is largely due to the held item Eviolite, which raises the monster’s Defense and Sp. Def significantly – more so than it does when evolved.

Its Cursed Body ability also helps as it has a 30% chance to disable any move its hit with, making it a beast of a tank when combined with the item. 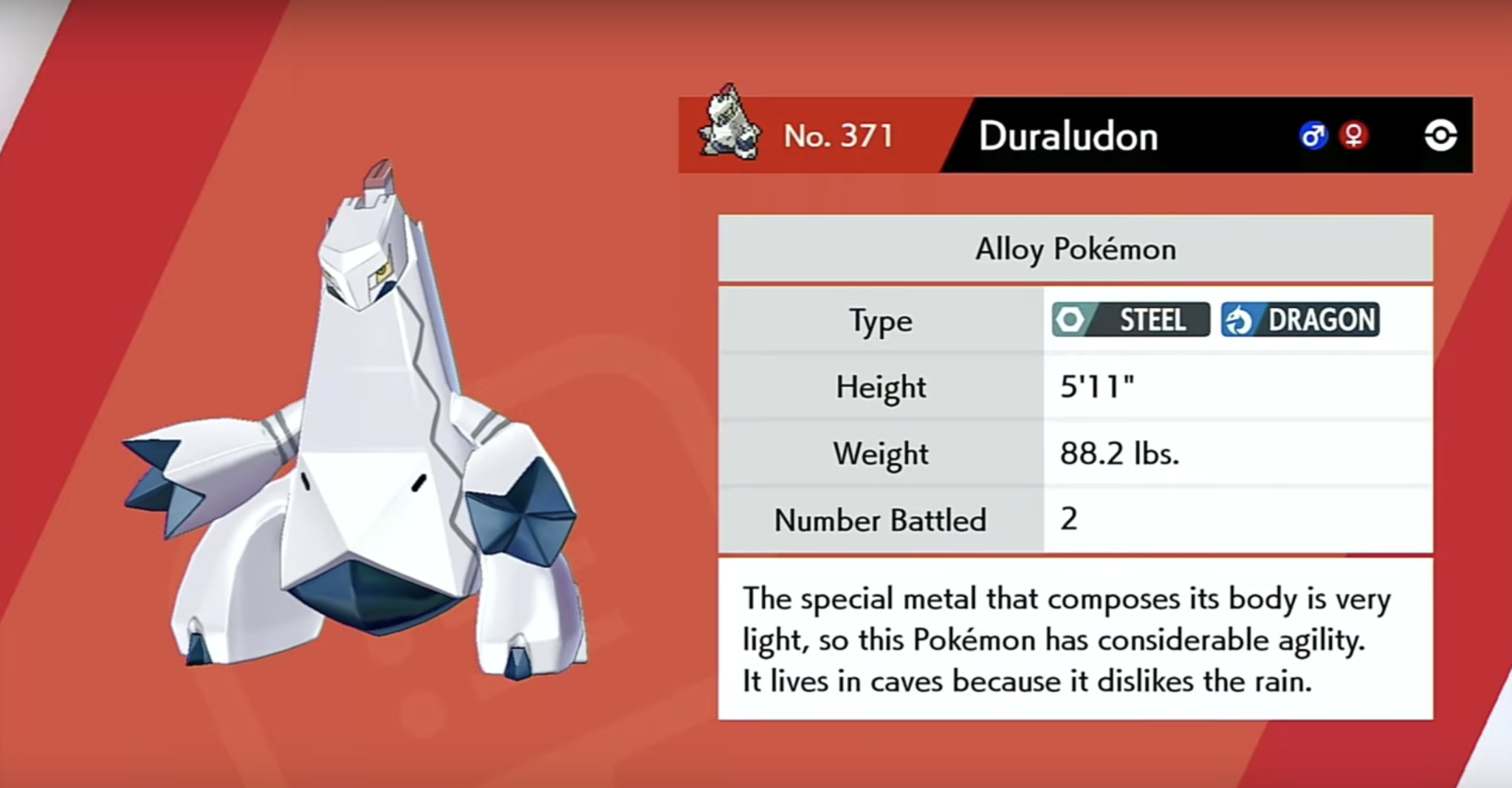 This Steel/Dragon type is a powerful fighter.

Like Hatterene, Duralodon has a hidden ability that is crucial to coasting through battles, and that is Stalwart – a powerful passive that ignores the effects of a foe’s abilities and moves that draw in moves.

You’ll also want to give it an Assault Vest item to hold, as it gives the Pokemon an insane boost of Sp. Def by 50 points, though it does prevent the user from being able to use any kind of status effect attacks.

Its Steel/Dragon type also means that the monster is only weak to Ground and Fighting types, giving it an increased wall of defense. Paired with the hidden ability and held item, it’s a fighter you won’t want to miss out on. 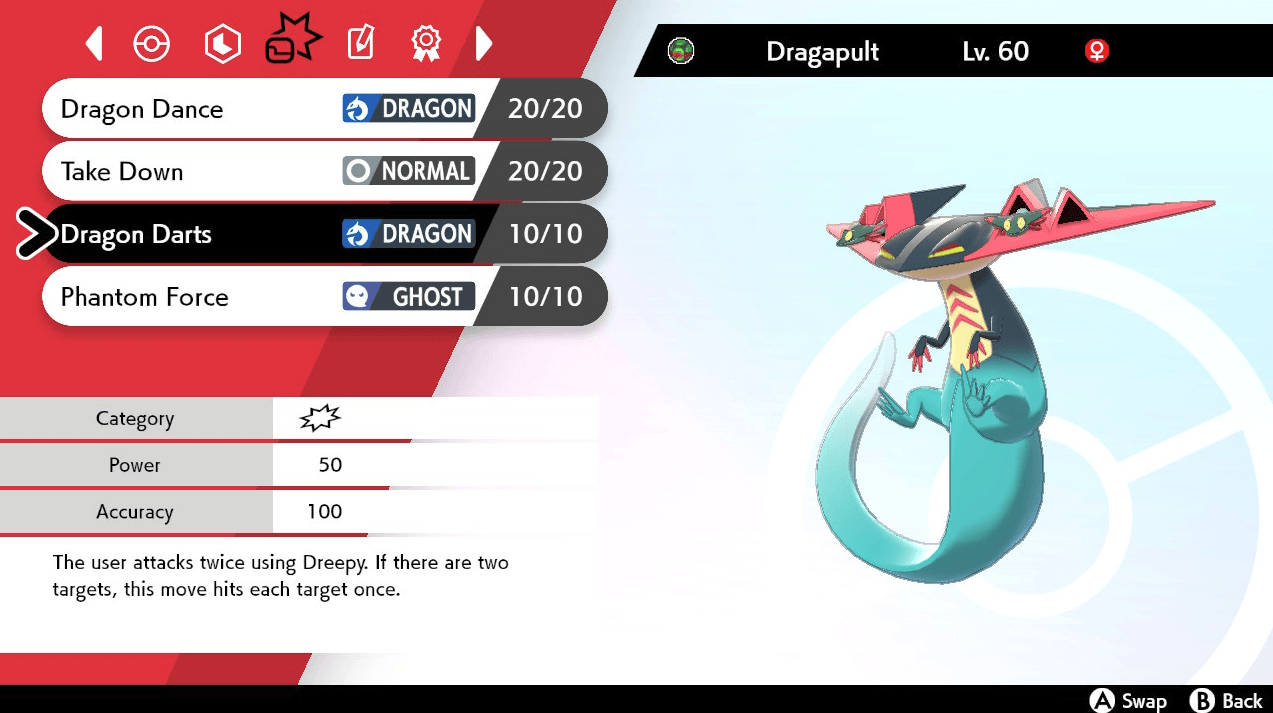 Give your Dragapult a Life Orb to hold.

The Dragon/Ghost type monster is the third evolution of Dreepy, and shouldn’t be underestimated under any circumstances – it’s a powerhouse.

Like Corsola, its Cursed Body hidden ability isn’t one to miss, as it gives the creature a 30% chance of disabling an attack it’s hit with, making it perfect for shutting down powerful moves. Clear Body is also a great pick as it prevents other Pokemon from lowering its stats.

Increasing its Speed stat to max at 142 will also give you an insane advantage, and when paired with the Life Orb held item, it’s an incredibly heavy hitter. 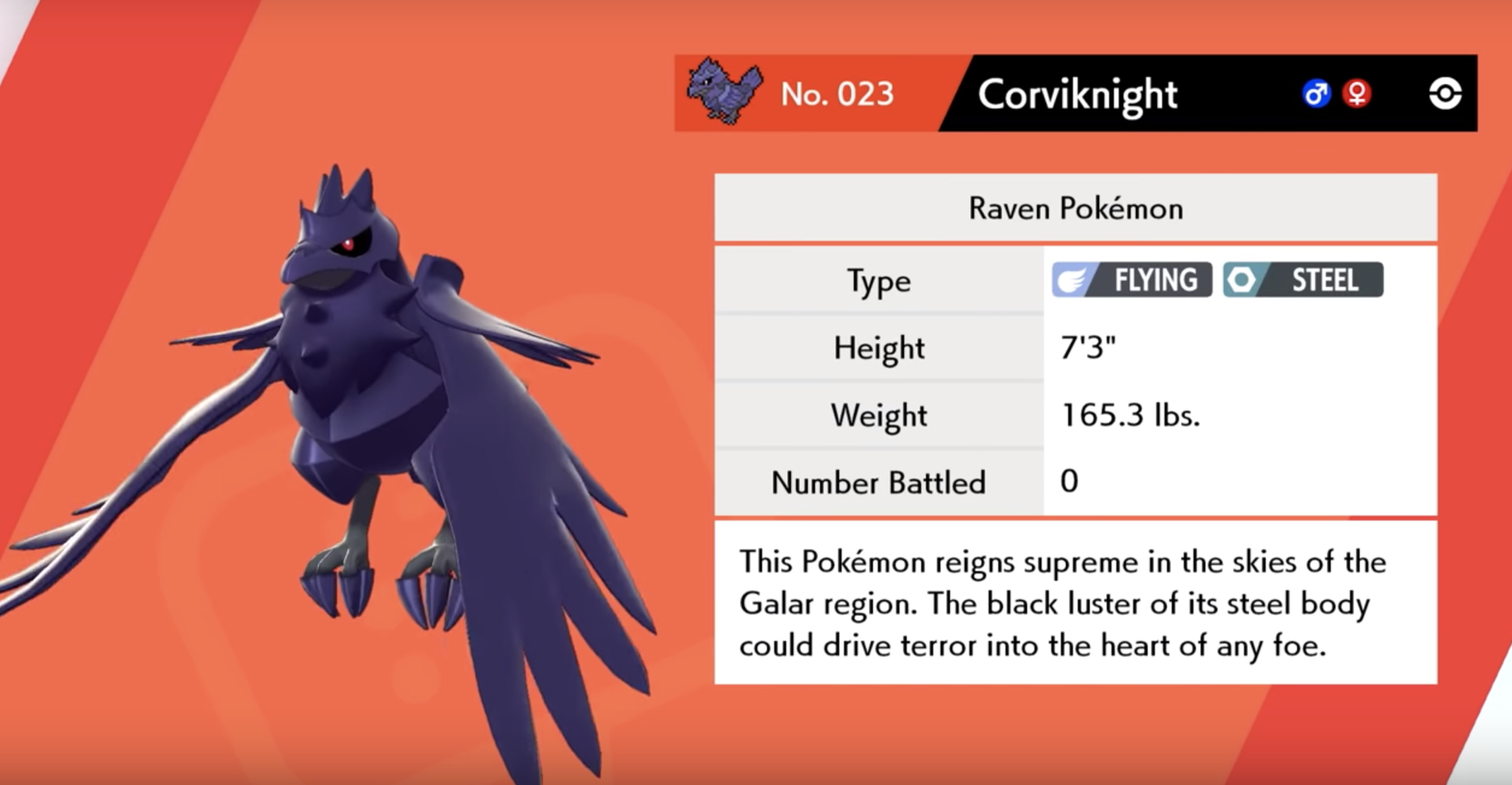 Move over, Skarmory – a better bird has arrived.

If Corviknight’s threatening appearance doesn’t give your enemies the chills, its capability in battle surely will. While Skarmory was previously the bird not to mess with, there’s a new Steel/Flying raven in town.

Mirror Armor is the ability you’ll want to use, as it reflects stat-lowering effects of moves back to the user, making it especially powerful against foes who have a stat-lowering ability.

As it doesn’t have the best defense, giving the bird Leftovers to hold means that it will recover HP throughout the battle, and give it the best chance to show off its potential.

Gyarados has been in the games ever since the beginning, and it’s still a big threat in Sword & Shield.

This Water/Flying Pokemon has been a fan favorite since Generation I, and has been a staple member of many players’ parties across many games due to its powerful stats – Sword and Shield being no different.

Dynamaxing the monster is the key to maximizing its capability, as it gives it a significant boost in speed, and when paired with its Moxie ability, increases its Attack each time an enemy is knocked out, too.

Like Corviknight, giving the scary Water monster Leftovers to hold will grant you the edge when in a fight, as allowing it to regain HP is crucial for longevity. 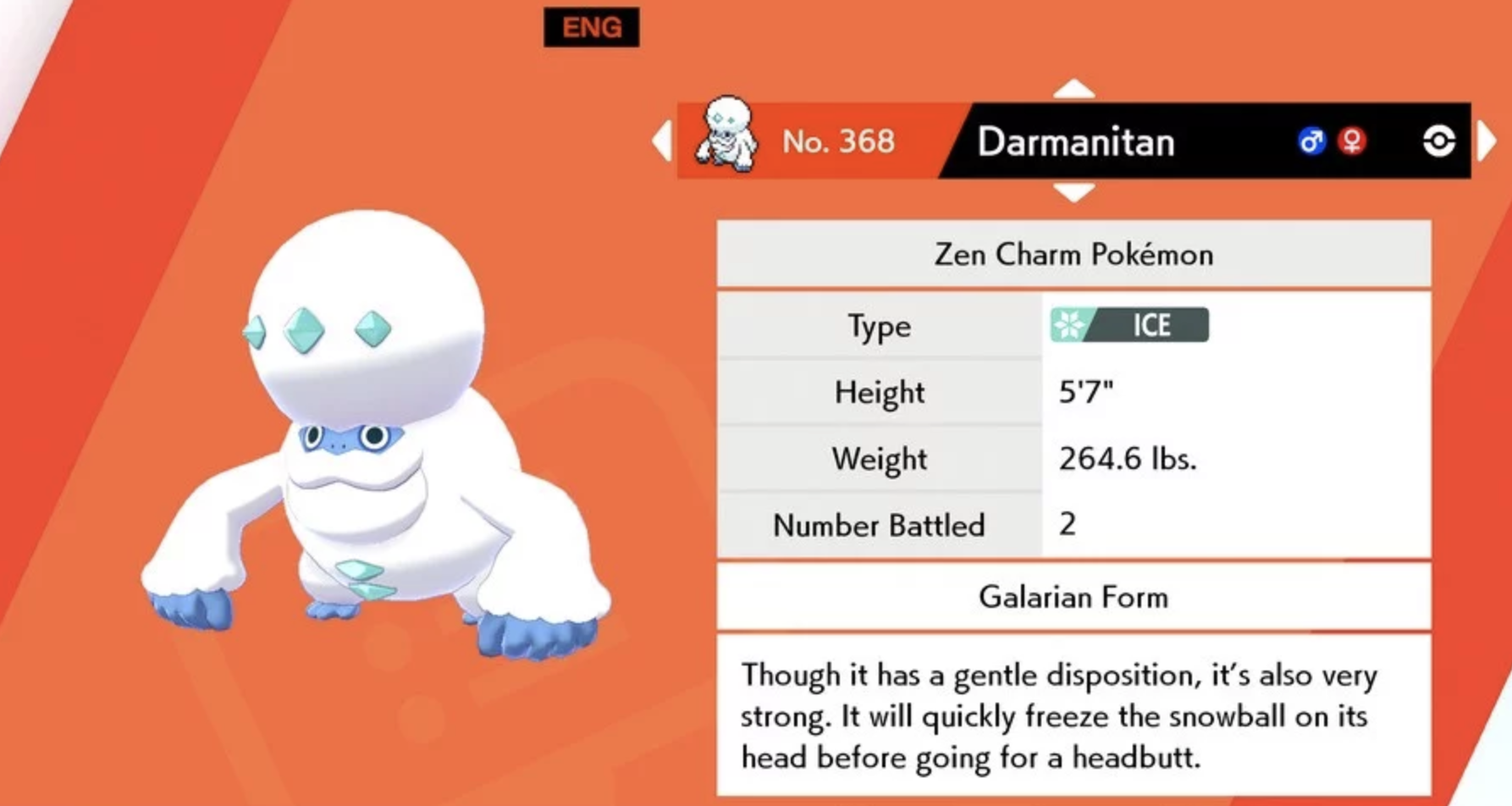 Darmanitan was first introduced in Gen V in the Black and White games for the Nintendo DS. It is an Ice type monster, and though it doesn’t look mighty, it actually packs an impressive punch. You can get one by evolving Galarian Darumaka using an Ice Stone.

Its hidden ability Zen Mode kicks it up a notch by allowing the Pokemon to transform into a different form once its HP goes below 50%, though it changes back when its health goes above 50%.

Giving it the Choice Band or the Choice Scarf to hold is key, since they give it a boost in speed or attack for one move, meaning you can use it on its most powerful move for maximum effect. 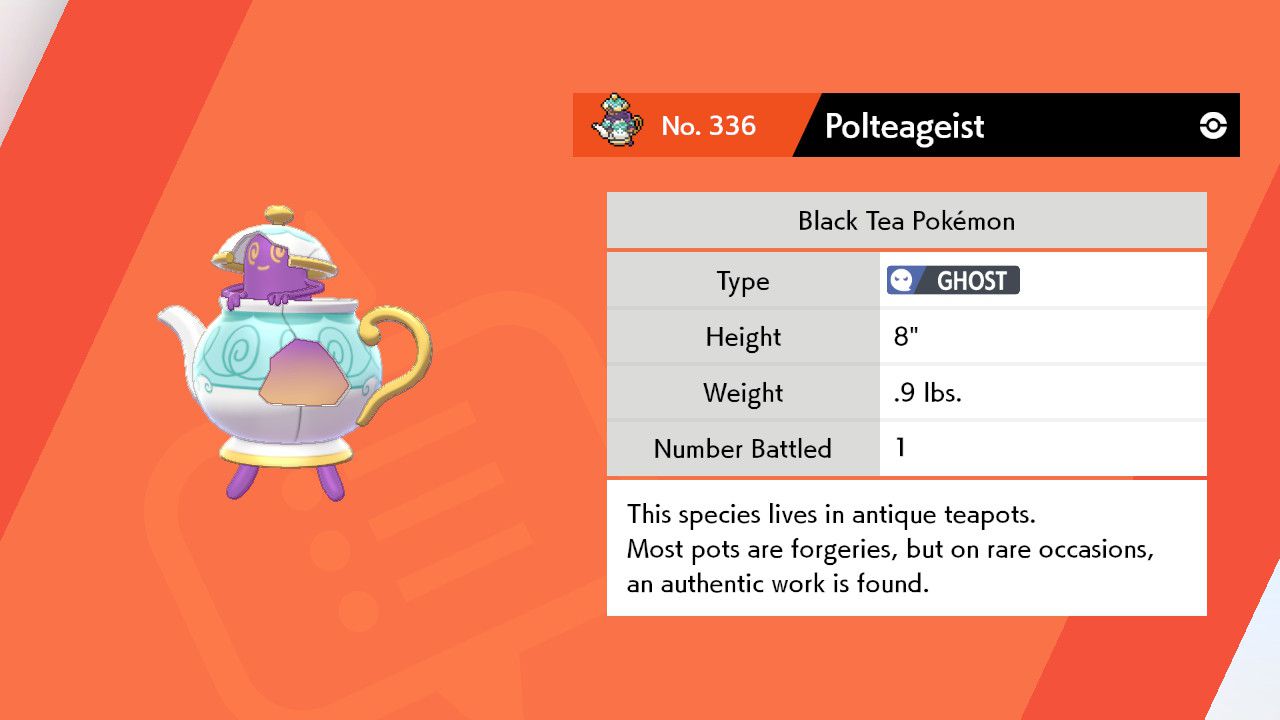 There are two forms: Phony and Antique. Neither affect stats, though.

Since the Galar region is based on the United Kingdom, it would only be fitting to include a Pokemon to fit the stereotype of drinking tea – Polteageist. It evolves from Sinistea using either a Cracked Pot or a Chipped Pot, and its appearance changes depending on which one you use.

Like Galarian Corsola, its Cursed Body ability gives it a 30% chance to disable a move used against it, and its Ghost type makes it a strong contender against other Ghost and Psychic monsters.

Having it learn Stored Power allows it to build up its stats every turn before unleashing a potent attack, and giving it a Focus Sash to hold will prevent it from fainting if it’s hit with a one-shot kill move while it’s storing energy.

Cinderace’s Court Change is a must have.

As the third and final evolution of the Fire-type Starter monster Scorbunny, Cinderace is an extremely formidable foe if set up properly for battle.

Though it can be outsped by other faster Pokemon such as Dragapult, its attack boost when combined with a Life Orb or Choice Band makes it a mighty opponent in fights.

Its exclusive Court Change move causes any active effects to swap sides, meaning it’s an overpowered ally if your team has some nasty inflictions. 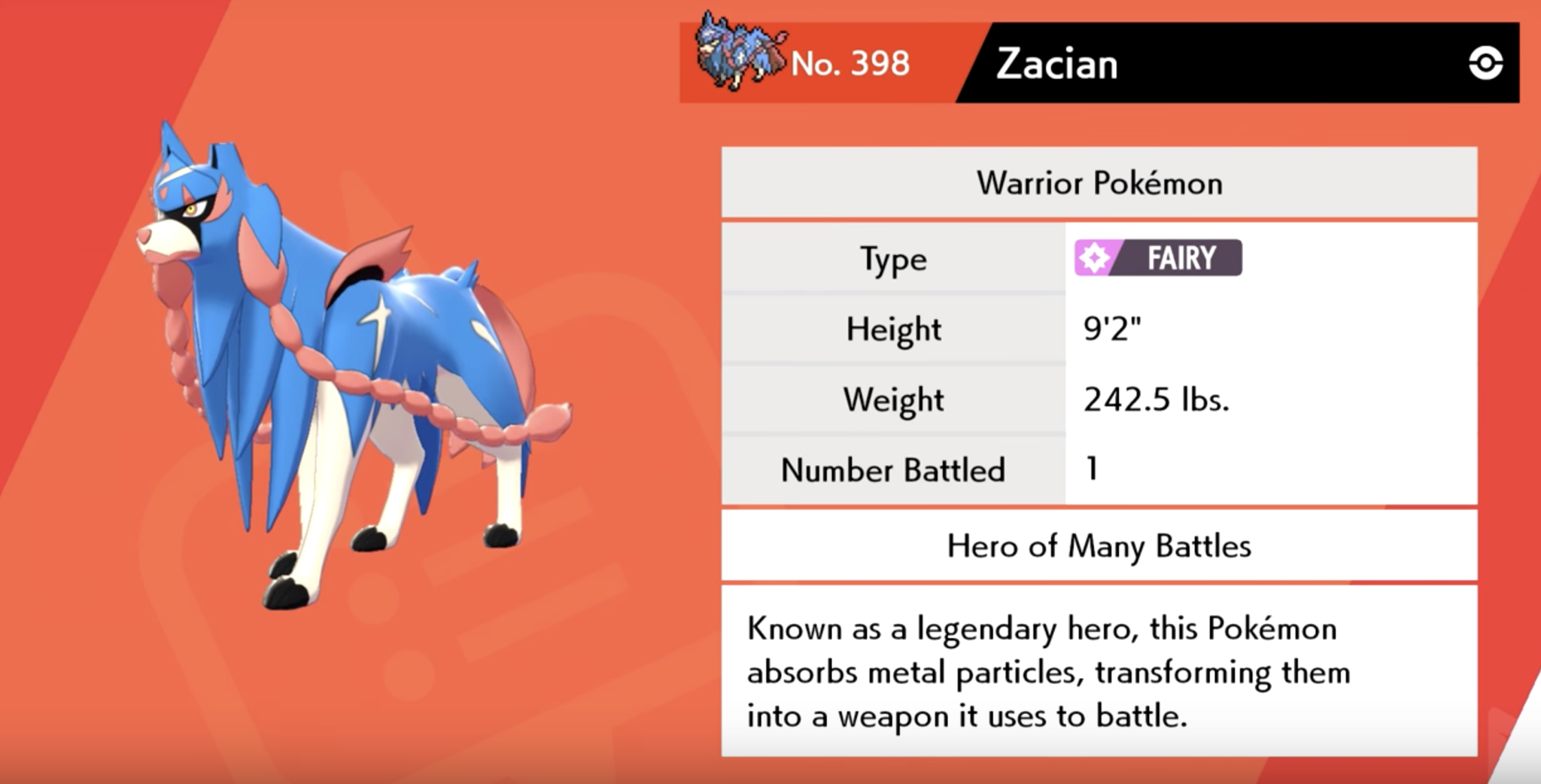 Sword’s Legendary dog isn’t one to be messed with.

As Sword’s exclusive Legendary Pokemon, Zacian packs a nasty hit in combat. Its Intrepid Sword ability raises its attack stat when it first enters the ring.

Behemoth Blade is a move you’ll definitely need to learn if you want to tackle Max Raid battles, as its base power is doubled if used against Dynamaxed or Gigantamaxed foes.

If it holds a Rusted Sword, it’ll transform into its Crowned Sword form, and its base attack increases by 40 points, while its base speed is boosted by 10.