There is no doubt that Tfue’s lawsuit against FaZe Clan has been one of the biggest topics of discussion in esports since the news broke on May 20.

The saga between the star streamer and his org has been multi-faceted and drawn out, and the latest chapter has seen his brother Joogsquad get hacked on Twitter.

On May 23, tweets began getting posted on Joogsquad’s account that mentioned Tfue, FaZe, and others involved with the situation.

While clearly the tweets were being put out by hackers, they continue to remain posted on the page at the time of this article’s writing, nearly an hour after the first tweet went out. 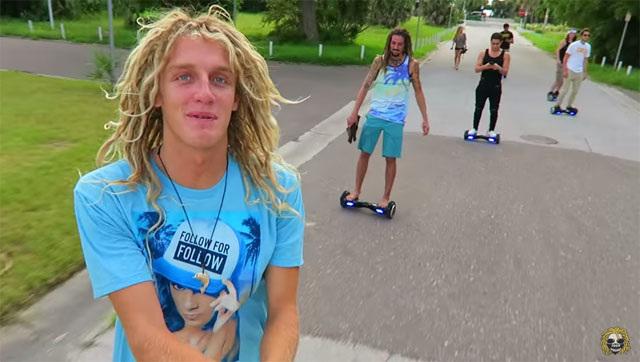 Tfue’s brother Joogsquad is a YouTuber with over 4.5 million subscribers.[ad name=”article3″]

The one tweet that caught most people’s attention was one in which the hackers promised that he would leak the direct messages on the account if the tweet hit 1,000 retweets.

That target was reached within minutes of the tweet being posted, although no DMs have been leaked as of yet.

The hackers went on to claim that they were the same ones who hacked Tfue’s social media and content platforms nearly a year ago, which caused a massive stir in the online gaming community at the time when it happened.

“If Tfue didn’t make that law suit and snaked FaZe Clan for the clout, money and success, we wouldn’t of hacked this pleb,” they tweeted. “Sadly, we already did the job on Tfue a year ago. FaZeUp for life.”

Here are some of the other tweets posted by the hacker: 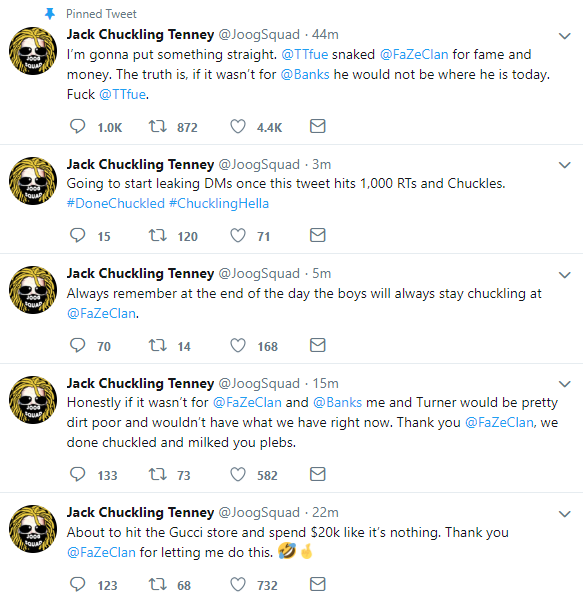 He also put out several tweets about the situation that weren’t really aimed at anyone, but happened to be the last posts he made prior to getting hacked.

In the three days since news of Tfue’s lawsuit against FaZe went public, the drama has had more twists and turns to it than a racetrack..

Following Banks’ emotional video about why he can never forgive Tfue after all this, the Fortnite BR star put out his first statement since the drama began, explaining that his aim was to get out of a contract he feels was “bizarre” and “fucked.”

Banks has since admitted that the deal was “horrible,” promising that FaZe will make the contract public for everyone to see, but has also called Tfue a “selfish asshole” for his scheme.

Although the contract has not yet been released, it was reportedly leaked shortly following Tfue’s video, but there is no way of knowing whether it is the actual agreement until FaZe release the official contract.