IRL Twitch streamer CJayRide was horrified after a child appeared to catch on fire while jumping over a flame-covered rope during a live broadcast.

CJayRide was at a fire show at Langkawi Beach in Malaysia, and was mesmerized when he noticed people were jumping rope with fire – a burning twist to the popular activity.

A woman held one end of the rope while a man in a wheelchair grabbed hold of the other and twirled it for on-lookers to join in and partake in the activity. 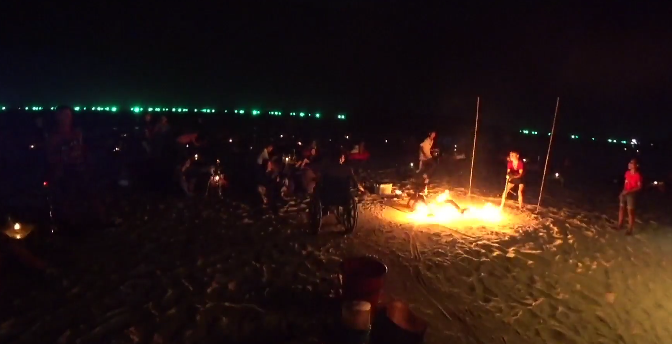 This takes rope burn to a whole other level.

“Jump roping fire? Oh yeah, I used to do this as a kid too,” the IRL streamer sarcastically said as he observed the spectacle, and as the kid began jumping.

“Oh sh*t,” he gasped as the boy did three rotations without fail. However, by the ninth or tenth skip, the young child tripped and appeared to become engulfed in flames.

Quickly, the streamer turned the camera away from the boy and back onto his own paralyzed face, seemingly immobilized in awe at what he’d just witnessed.

“Okay, he’s on fire,” he observed. “That kid is actually on fire. I had to turn the camera. Am I allowed to show that?”

A few moments later, the action picked up with another challenger attempting to jump over the fire rope. However, this time, before the brave attendee could even get a single skip in, the rope hit his leg, prompting him to jump away.

“This is kinda insane,” CJayRide laughed, still in shock.

For his part, the IRL streamer has experienced some crazy sights on his channel. Back in July in 2019, he was attacked by a man who didn’t want to be filmed. One month later, a stream sniper pretended to mug him before revealing the whole thing was just a joke.

It seems like there’s never a dull moment with CJ and hopefully he keeps producing more quality content in 2020.