Streamer and Instagram star Corinna Kopf has suggested that she may be leaving Twitch for a rival platform after being banned during her birthday broadcast on December 1.

Taking to Twitter, the Instagram model cheekily hinted that she was exploring other streaming options and that her time on Twitch may be coming to an end sooner than later.

“With the ever evolving streaming platform options I think it might be time to see what else is out there,” she wrote and topped her message off with a nerd face emoji.

hmmmm with the ever evolving streaming platform options I think it might be time to see what else is out there ?

If Kopf leaves Twitch it would be a blow to the platform that seems to see a prominent streamer jump ship every week or so. Already, the once seemingly unbeating giant has had the likes of Ninja, shroud and Ewok leave for Mixer.

Mixer isn’t the only other game in town either. Other prominent streamers like Super Smash Bros legend ZeRo and Disguised Toast left Twitch for Facebook Gaming.

In a series of tweets that have since been deleted, Kopf originally claimed Twitch banned her for wearing a chanel tank top during a stream. She later backtracked on December 3 and instead said she had been banned for a clip from “well over a year ago.” 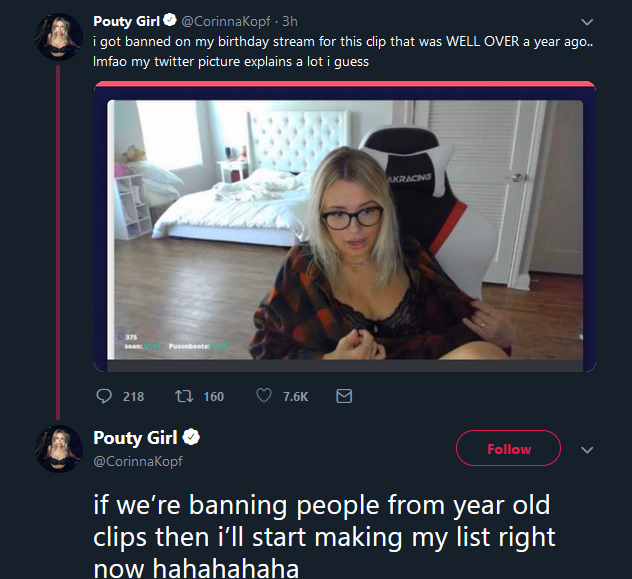 In deleted tweets, Corinna said she was banned due to a clip from over a year ago.

While her messages were erased and she has since been unbanned, there’s no doubt that the streamer harbors some resentment towards Twitch for banning her on her birthday of all things.

Whether or not Kopf actually leaves remains to be seen, but she certainly has the star power and following to bring her audience with her, as her Instagram followers exceed a whopping three million people.

As the streamer wars continue and rage on into 2020, it will be interesting to see if Corinna decides to give Twitch a second chance or if mixes it up on a rival service.