Everything to know about Valorant: Agents, maps, weapons, beta

Riot Games have released a ton of information about their upcoming FPS title, Valorant. Here’s everything you need to know, including the Agents and their abilities, all the Weapons and how to use them, and the maps.

It’s hard to name a game that’s been more highly-anticipated in recent years than Valorant, Riot’s entry title into the first-person-shooter genre.

On April 3, the developers opened the floodgates of info about the game, allowing the content creators that were given early access to finally share their captured footage, including CS:GO legend Mathieu ‘Maniac’ Quiquerez, who shared some of his early opinions on the behalf of Dexerto.

Riot launched the game’s beta on April 7. The beta is closed, however, and access only granted by tuning into streams tagged as ‘Drops Enabled’ on Twitch. You will receive a notification on Twitch if you’re one of the lucky players selected to take part in the closed beta.

In order to qualify for your chance, you must link your Riot ID to your Twitch account, watch those streams, and hope that you’re lucky enough to get a key. More details about this process can be found here.

We got a good early look at Valorant from last weekend’s capture event, so here’s a breakdown of everything we know. ‘Agent’ is the name given to the characters in Valorant. Much like heroes in Overwatch and champions in League of Legends, each Agent has their own personality, backstory, and, most importantly, a set of four abilities that can affect the match. 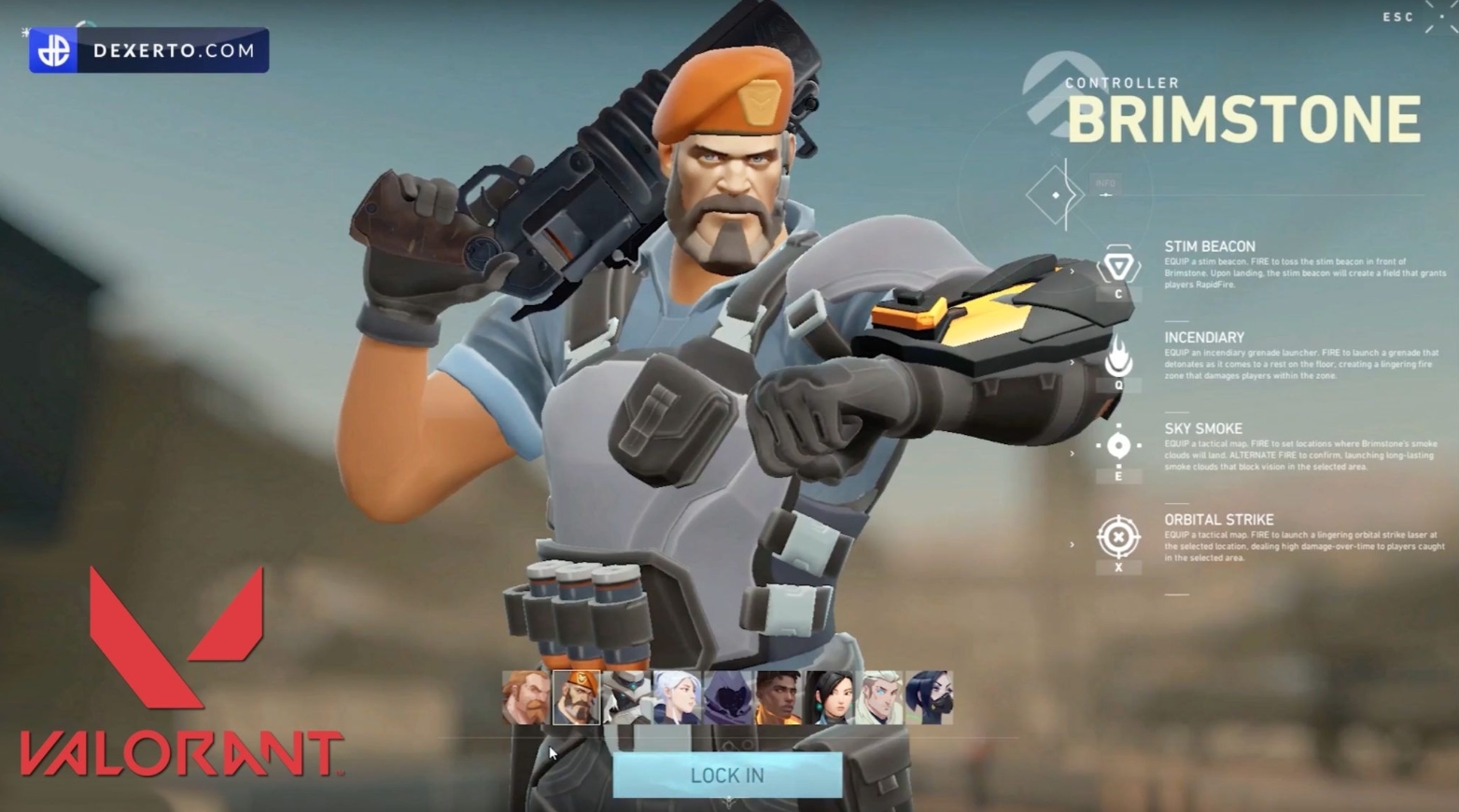 Known as the Controller Agent, Brimstone has a wide variety of abilities that allow him to either support the team or deal damage directly to enemy players with the likes of Incendiary and Orbital Strike.

Check out our full Agent guide for more information on Brimstone and the best ways to use him in Valorant.

Breach was the ninth Agent to be revealed and is known as an Initiator, as all of his abilities can impact enemy players with either direct damage or a stunning/flashing effect.

Check out our full Agent guide for more information on Breach and the best ways to use him in Valorant. 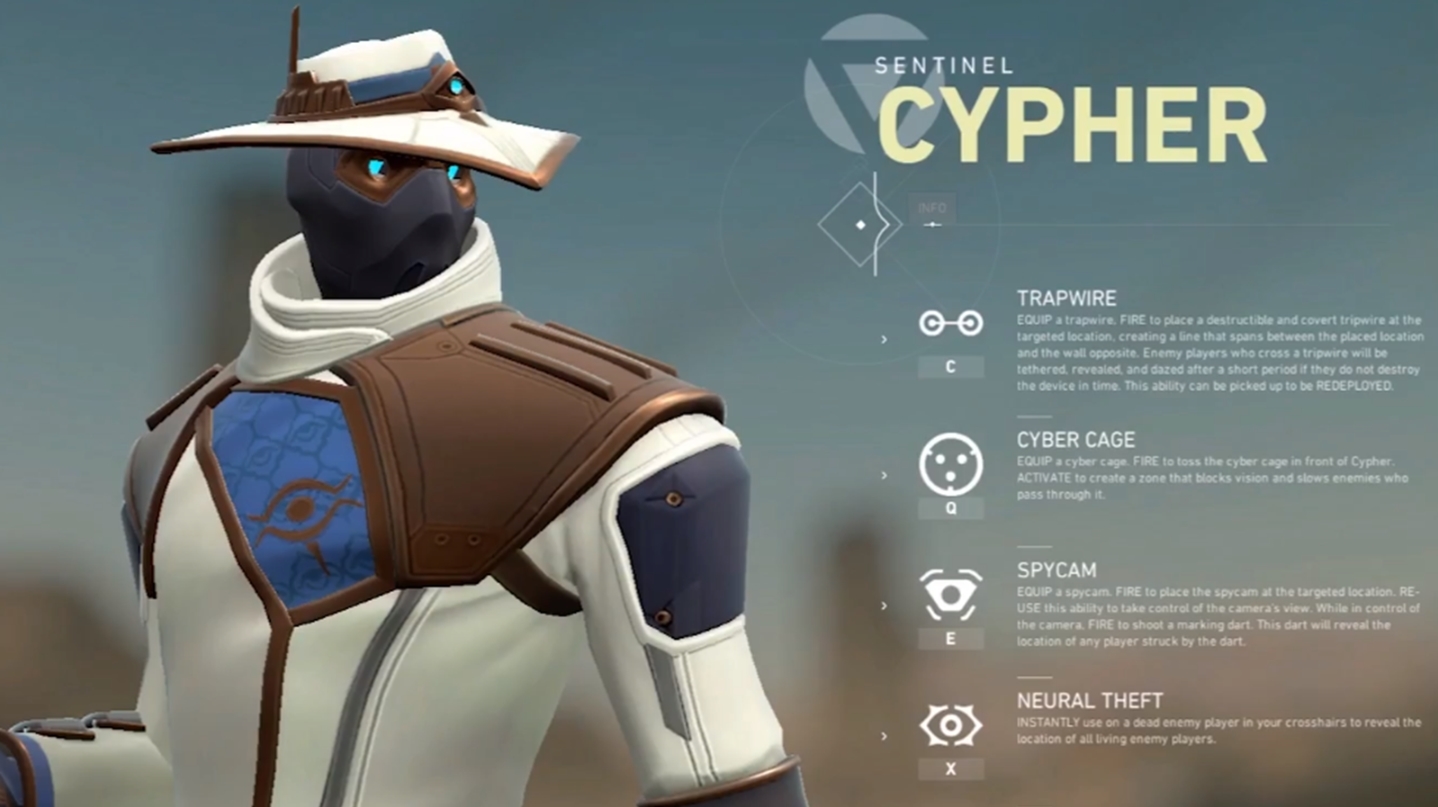 Cypher’s main purpose is to try and gather intel about the enemy team and share it with his own. The Moroccan looks to be one of those Agents that every squad wants to have on their side.

Check out our full Agent guide for more information on Cypher and the best ways to use him in Valorant.

Jett is a high-paced, knife-wielding Agent in Valorant.

Jett is undoubtedly one of the more aggressive Agents in the game, as her abilities are tailored to boost her movement, allowing her to whiz around and cut enemies up.

Check out our full Agent guide for more information on Jett and the best ways to use her in Valorant. 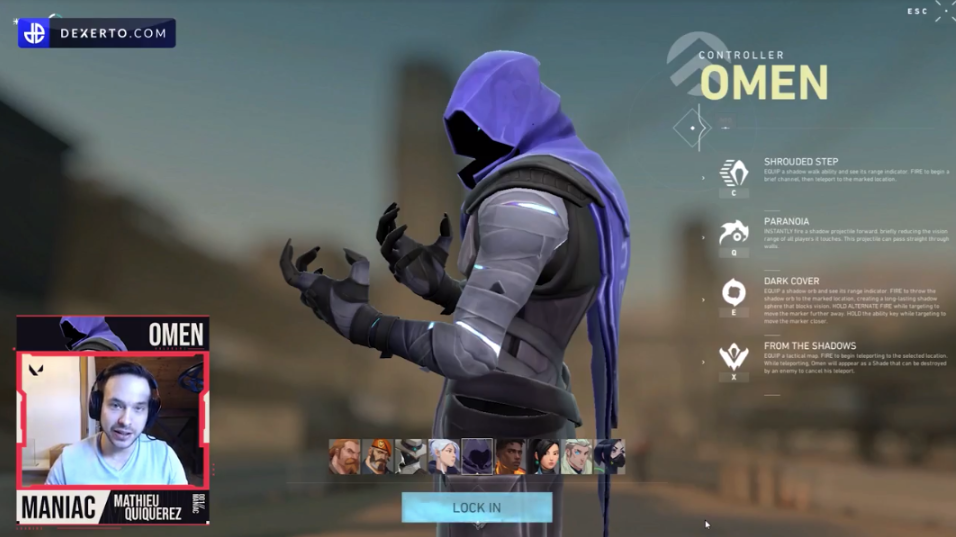 One of the more mysterious and sinister-looking Agents in Valorant, Omen is known as the Shadow Hunter due to his stealthy kit that allows him to stay out of sight from the enemy team.

Check out our full Agent guide for more information on Omen and the best ways to use him in Valorant. Phoenix entire kit in Valorant is based on fire.

As his name suggests, Phoenix is a fire-based Agent with all of his abilities featuring some sort of incendiary effect. The Fiery Duelist’s kit can both deal direct damage and provide support for his team.

Check out our full Agent guide for more information on Phoenix and the best ways to use him in Valorant.

Raze was a surprise addition when the Valorant beta started.

Raze was the only Agent Riot didn’t reveal before the closed beta started, but she instantly made an impact. An explosives specialist, Raze is an absolute nightmare to play against, but a blessing on your squad, as she can force opponents off a bombsite with ease. Sage is another Agent that’s fully support-oriented, and she actually has the power to not only heal herself and teammates, but to also revive them back from the death with full health.

Check out our full Agent guide for more information on Sage and the best ways to use him in Valorant. Sova’s kit is as lethal as it gets in Valorant, giving the Russian recon expert the power to strike fast against the opposition with ruthless force. However, not only can his abilities deal damage to enemies, but some of them have reconnaissance purposes as well.

Check out our full Agent guide for more information on Sova and the best ways to use him in Valorant. 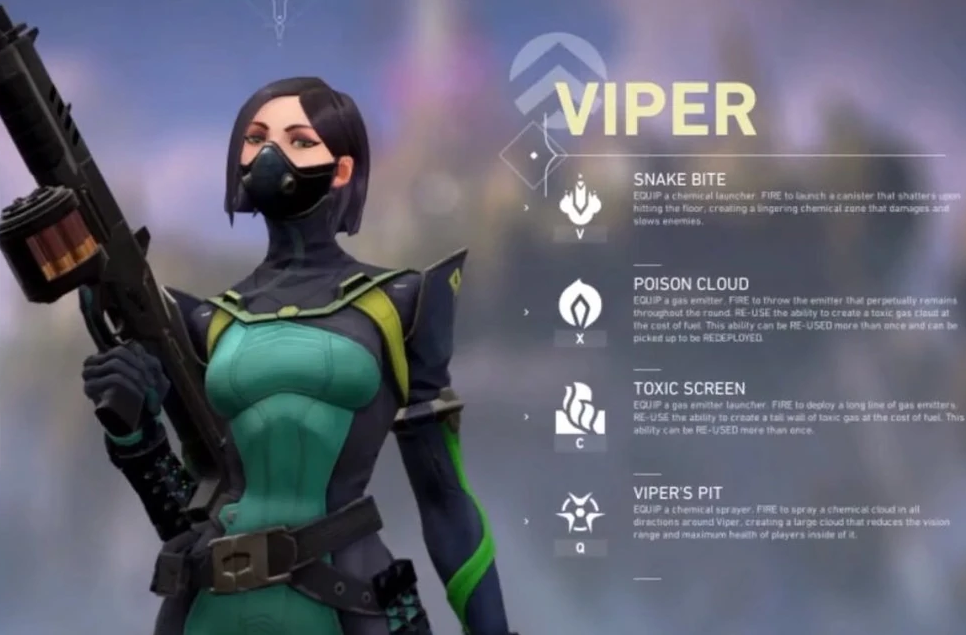 Viper specializes in chemical warfare, as she has the power to poison her enemies both physically and mentally. While she does have the ability to deal damage, her kit focuses more on trapping opponents right where she and the rest of her team can see them. All of the weapons available in the current version of Valorant.

As you’d expect, weapons play a big role in this new first-person-shooter, and there are plenty of guns for players to try out. The primary weapons are divided into several sub-categories: SMGs, Rifles, Snipers, Shotguns, and Heavy.

Each player also gets a secondary, which usually come in the form of a handgun but there is the option of using a mini-shotgun. Much like CS:GO, you’ll have to purchase the gun that you want to use each round, so there will be times when you’ll have no choice but to use a lesser one.

Riot have already confirmed that Valorant will launch with at least three maps, Haven, Bind and Split, all of which are playable during the beta. 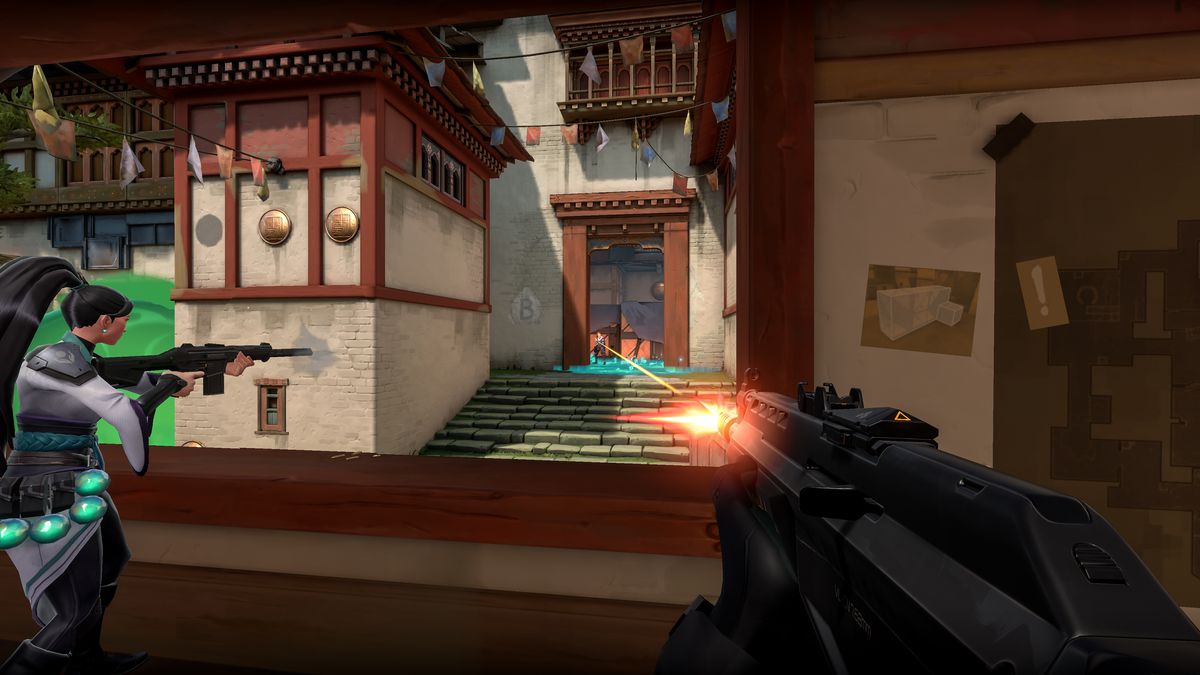 Haven is a standard tactical shooter map that features three sites instead of the usual two.

Haven is the prototypical, classic tactical shooter map in every aspect except one – it has three sites that the defending team needs to protect rather than the usual two.

The sites are closer together, so while the defending team will have more space to worry about, rotating from one to another doesn’t take much time, which is a disadvantage for the offensive team. 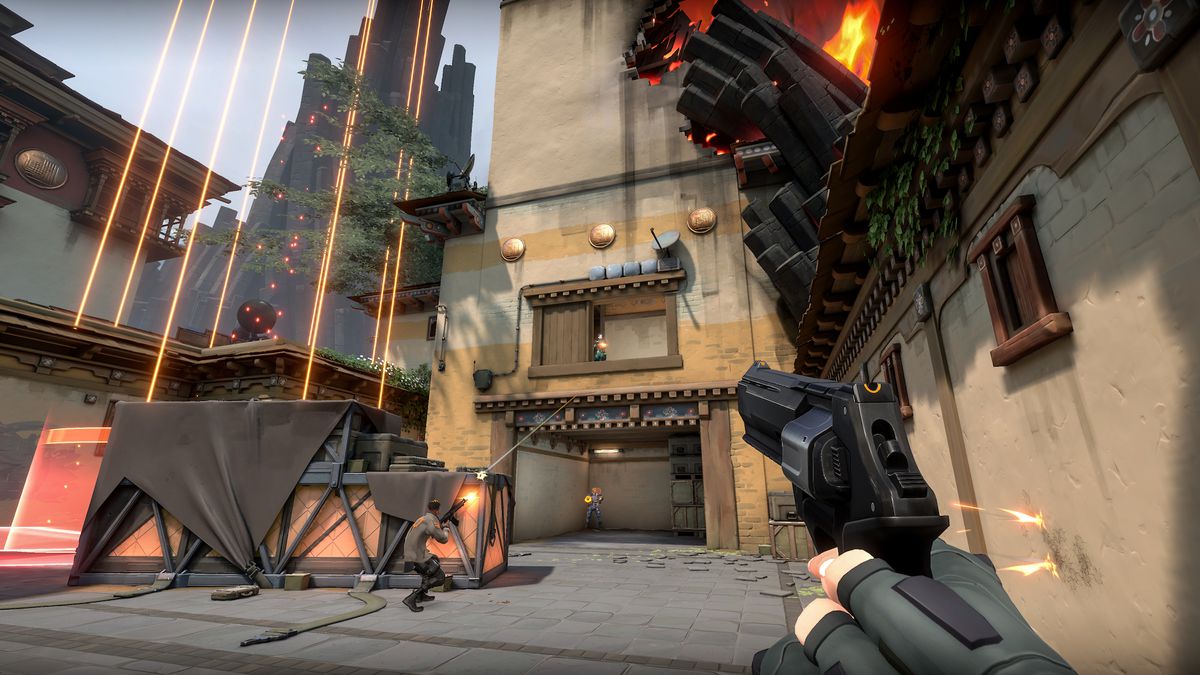 With no middle area, players can use teleporters as shortcuts on Bind.

Bind is a lot less of a traditional tactical shooter map than Haven, mainly because it has no middle area and instead only features two main pathways, one to each site.

It also features two-way teleporters that players can use to instantly get from one site to another, however, when used, these machines let out a loud noise, so everyone the map will know if someone’s trying to take a shortcut.

Split is a very unique map in Valorant, with some interesting features.

Split differs from the other two maps thanks to its verticality. You’ll find yourself aiming up and down more on this map, with high windows having clear views of both bomb sites.

But, there are easy ways to make up the ground, thanks to the conveniently placed Zipwires that you can latch onto and use to ascend or descend safely (and quietly, if you “walk” rather than “run” on them).

Very narrow chokepoints lead into both sites though, so expect a barrage of abilities as attackers make their entrance.

When Riot first unveiled Valorant, they announced that the game would launch with only one mode, the Search and Destroy-style game-type that CS:GO and Call of Duty players will be familiar with.

Each team, composed of five players using different Agents, will either be tasked with attacking the sites on the map or defending them. Valorant will launch with only one mode, the Search & Destroy-style game-type that CS:GO players will be familiar with.

The offensive team’s objective will be to plant the Spike (Valorant’s version of the bomb) at one of the sites, and each round ends when either the Spike successfully goes off, the defending team’s players all get eliminated, the attacking team gets killed before being able to plant, or the Spike gets defused in time.

Matches will be a best-of-25, meaning the team that gets to 13 round wins first will claim victory.

That wraps up our full breakdown of everything you need to know about Valorant. Make sure to follow us on Twitter @ValorantUpdates for the latest news, updates, announcements, guides, and more.