The Pokemon Go schedule for December has been revealed bringing in an array of bonuses, special raid events, and even new Pokemon. There’s a lot to look forward to but trainers are particularly excited by the Christmas themed addition, Stantler wearing bells.

We knew there would be Pokemon Go events over the Christmas period but it looks like Niantic have pulled out all the stops here. There are six “events” being promoted, one of which (A Challenging Development special research quest) has already started.

There’s plenty to be excited about too, with Cubchoo, Cryogonal and Virizion all making their Pokemon Go debut in some form. Excluding the addition of the legendary Terrakion to Raid Battles, this is the first time a Gen 5 species have been introduced since October!

Elsewhere, there are the usual bonuses seen throughout other events, including everyone’s favorite – 1/2 egg hatch distance. We see this in some form several times throughout the year and it remains an excellent opportunity to go on a Pokemon Go walking binge. What better way to potentially get yourself some high IV Pokemon and even a shiny!

Among a few other treats for the holidays is the addition of Pokemon wearing “holiday costumes” though. Yes you guessed it, Pikachu is one of them!

Pichu, Pikachu and Raichu with their beanies…

Pichu, Pikachu and Raichu can all be found wearing beanies through December 24 to January 1. In keeping with the Christmas spirit, you can even come across Stantler wearing bells. If you’re really lucky you can even find it in shiny form.

According to the official Pokemon Go blog, you’ll be able to find the special Stantler in 7km eggs and in two-star Raid Battles. Presumably this means it won’t be in the wild.

Who would have thought with the addition of brand new Pokemon and every bonus you can think of that a cosmetic update to Stantler would have trainers most excited. 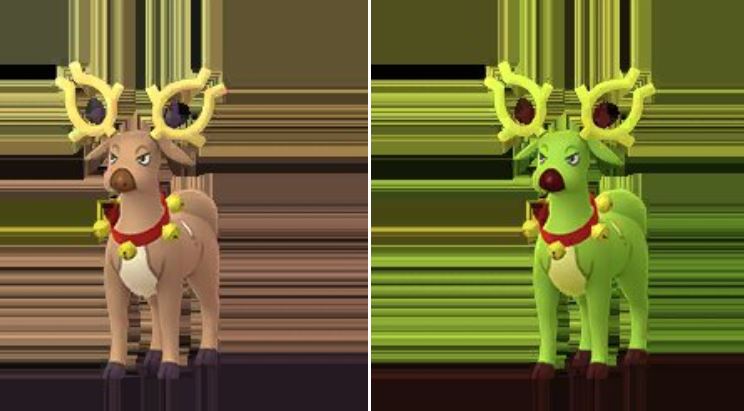 Stantler with bells and its shiny form…

The Christmas present everyone wants

Trainers have complained about the sheer number of Pikachu variations in the past but a Christmas themed Stantler is apparently what everyone wants, adding bells to it being just the right move. “STANTLER WEARING BELLS? I gotta have that! Sounds so cute!” Kelly Kollar shared on Twitter.

STANTLER WEARING BELLS? I gotta have that! Sounds so cute!

Corsaint Aimarie isn’t too bothered about the new Team Rocket quest or even the introduction of Virizion, but they’re certainly excited for Stantler. “More Team Rocket Virizion blah blah blah. STANTLER WITH BELLS AND SHINY STANTLER SIGN ME UP OMG THAT SOUNDS SO CUTE”

Then there is Meleassuh who isn’t interested in the prospect of a powerful Shadow Pokemon: “I don’t care for the shadow Pokémon’s BUT I’m excited for shiny Stantler in PokémonGo later this month and bells on its antlers.”

I don’t care for the shadow Pokémon’s BUT I’m excited for shiny Stantler in PokémonGo later this month and bells on its antlers. ?

Stantler is officially a Big Horn Pokemon but it looks like one trainer thinks of it as a reindeer. “Oh my gosh, I need Stantler with Bells! (They better have a red nose!!)” Shiny Misted shared.

Oh my gosh, I need Stantler with Bells! (They better have a red nose!!)

Bit of bad news Misty, according to the datamined image of shiny Stantler, it doesn’t.

With such a big December in Pokemon Go ahead which event are you most excited for?