Another round of Ultimate Legends rose to the surface on February 23, but it’s the information revealed for the following day that will likely bring more intrigue for Madden 19 Ultimate Team users.

As usual, three updated Legends – Andre Reed, Steve Atwater and Paul Krause –  were the latest ones revealed, with Krause earning the unfortunate distinction of being the limited-time option.

However, PS4, Xbox One and PC users should look forward to on February 24 when 17 new Power-Ups drop, providing Power-Ups to every MVP player without one previously, plus items for Rookie of the Year winner Saquon Barkley, and Man of the Year recipient Chris Long.

It’s perhaps sad that Ultimate Legends has been overshadowed by the Power-Up program, but it’s almost ironic in a way, since the lack of momentum is almost directly due to the fact cards can so easily be boosted at this point in the Madden season through the aforementioned upgradable-centered program.

Instead of catering to that possibility and presenting alternative chemistry options for players, we’re instead left with Saturday’s debacle, which showcases three 97 overall Legends who aren’t even in the same class of cards released even months prior. 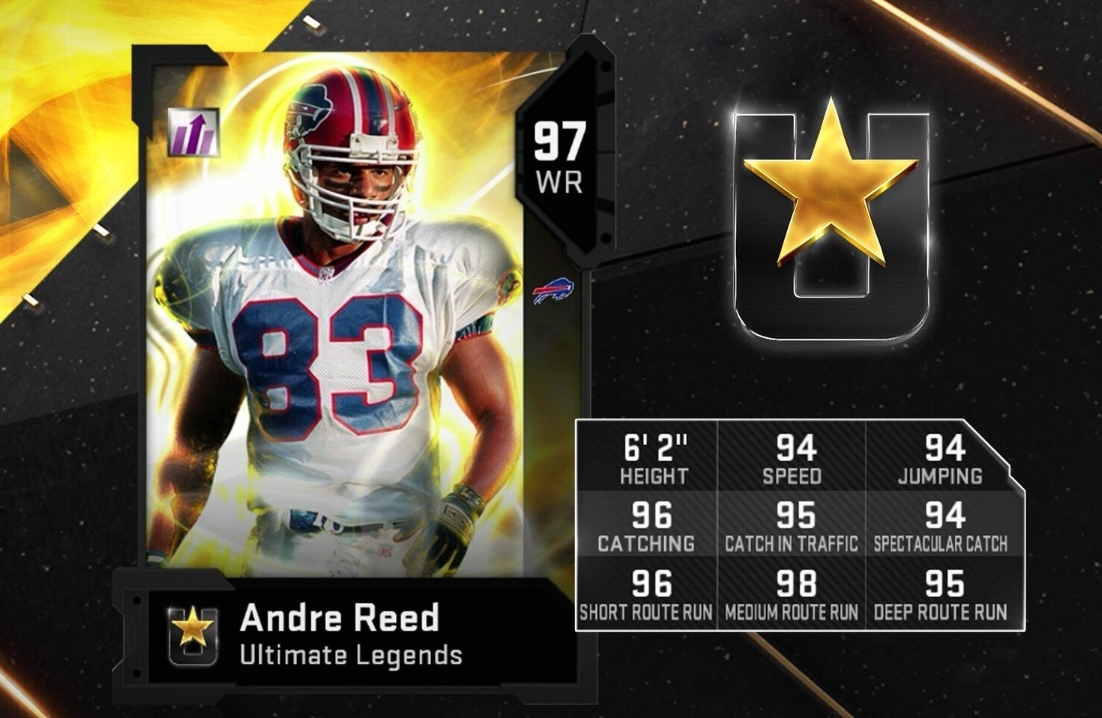 Andre Reed is the only card to drop on February 23 that’s worth its weight.

Former Bills legend Andre Reed might be the lone exception to the above point, as the 6-2 wide receiver is a solid card.

A 94 overall LTD item at the beginning of November, Reed joins a continual long list of previously hard-to-acquire cards to receive an Ultimate Legend upgrade which presents a more affordable option, and also yields a previously unreleased Power-Up as a result. That’s a boon for Redskins theme teams, as the Washington franchise had been without a legitimate receiving threat for most of the year.

A base 94 Speed is fine at this juncture of the game, and Reed has more than enough receiving stats where a user could focus extra resources specifically on boosting his speed without sacrificing his skills at WR. 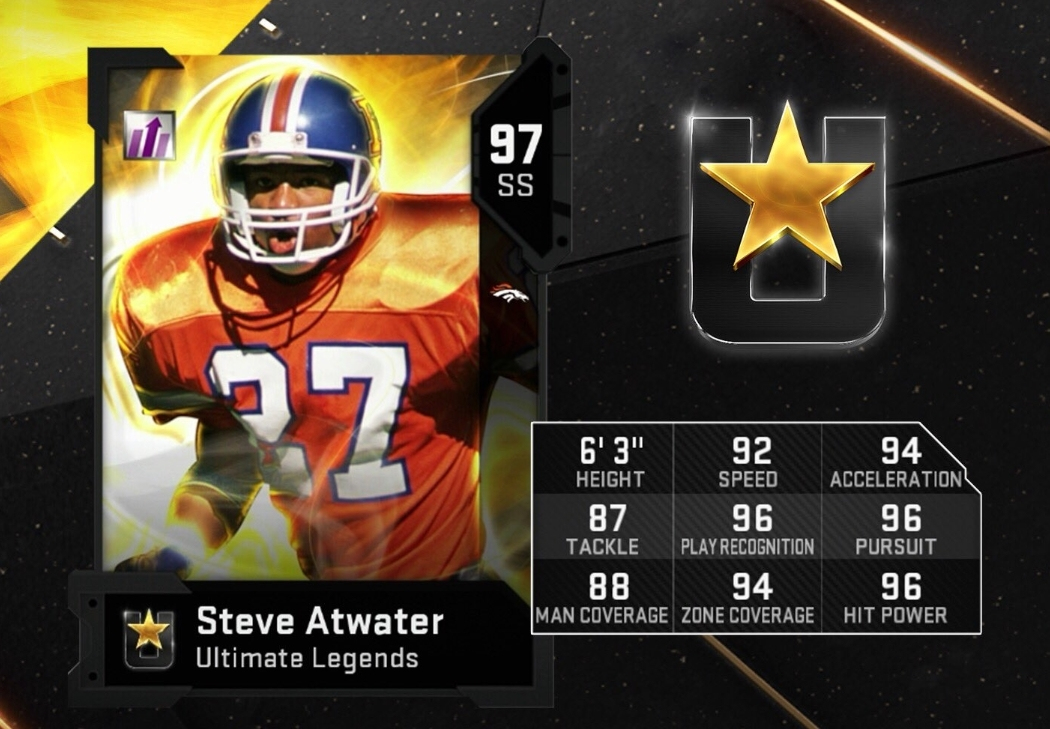 That last point is egregiously missed with the two safeties to receive their respective upgrades Saturday, and will likely draw a fair bit of criticism in the coming weeks and months.

For all the good that the Power-Up program has done – and it absolutely has been a positive addition to Madden Ultimate Team – we are beginning to see the increasing downside of having readily available +3 or +4 speed boosts for most players. Rather, EA has seen the apparent downside and essentially sandbagged players from reaching higher speed thresholds, all in the name of forcing MUT players to continue to boost up respective items through training.

Simply put, there is no reason why someone like Atwater should have 92 speed on a 97 overall item, especially not when obviously better items like 97 overall MVP Antoine Bethea or even 96 overall Ghosts of Christmas Past Ed Reed are so prevalent. Unless you are a die-hard Broncos or Jets fan, there’s absolutely no reason why you’d pivot from either of those items for Atwater, and even in the case of the green New York squad, Reed also falls under the team’s chemistry option when Powered Up. 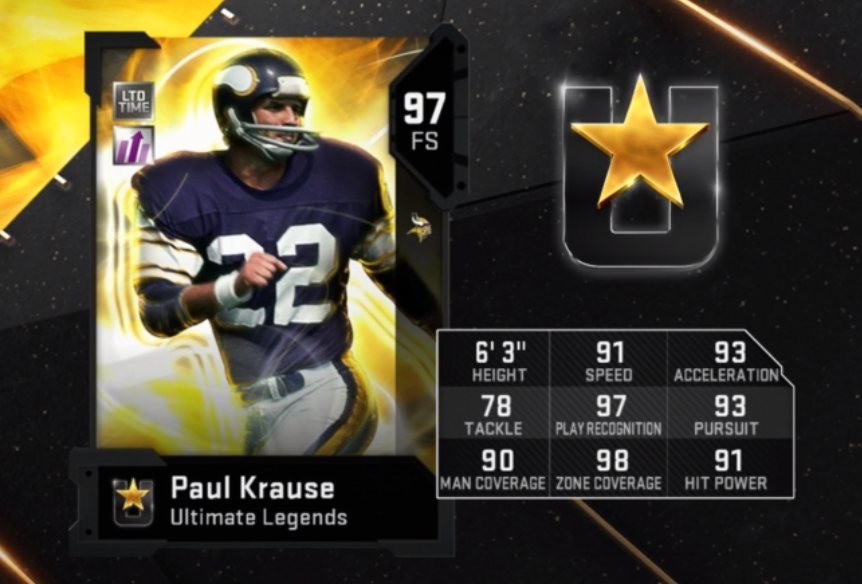 Poor Krause is an even more obviously altered case, as the Vikings legend isn’t anywhere near the 98 overall Ultimate Legends Sean Taylor which was released only a couple of weeks prior. And to make matters worse, Krause is also the LTD, which might as well be the final nail in the card’s “never to be used” coffin.

Even on EA’s February 23 stream, Krause’s viability, or lack thereof, was essentially admitted, as the host suggested the LTD item was best suited as a backup linebacker instead of starting at his natural free safety position. That’s at minimum a 500,000 coin card that should be used “situationally,” according to an EA representative.

Given Sprinter chemistry plus a John Madden coach card can provide +2 or +3 speed to a player without much training, it’s understandable why EA might think it’s a good idea to lower the speed of Legend cards. But at this point in the year, players should be able to experiment with a wide variety of chemistries and boosts to make their players unique, instead of using the same old tired formula that has made the meta stale.

A new slate of Power-Ups were announced for Madden Ultimate Team.

At least a laundry list of new Power-Ups will help bring different names to the fold, and hopefully continue to build off the impressive Team Builder and MVP program which changed the landscape of Madden Ultimate Team dramatically.

Here are the 17 Power-Up cards which will become available Sunday, and the theme team’s that will benefit from the cards: