It’s hard to suggest the latest round of Ultimate Legends is extremely appealing, as PS4, Xbox One and PC users likely will be more excited to engage in the Team Builders and Team MVP content which was released to overwhelming fanfare just a day prior.

However, at least in the case of Everson Walls, arguably the most impactful Ultimate Legend to join the circuit Saturday, the former Cowboys cornerback will now have an opportunity to join the Power-Up program, helping the likes of Giants and Browns theme teams as well. 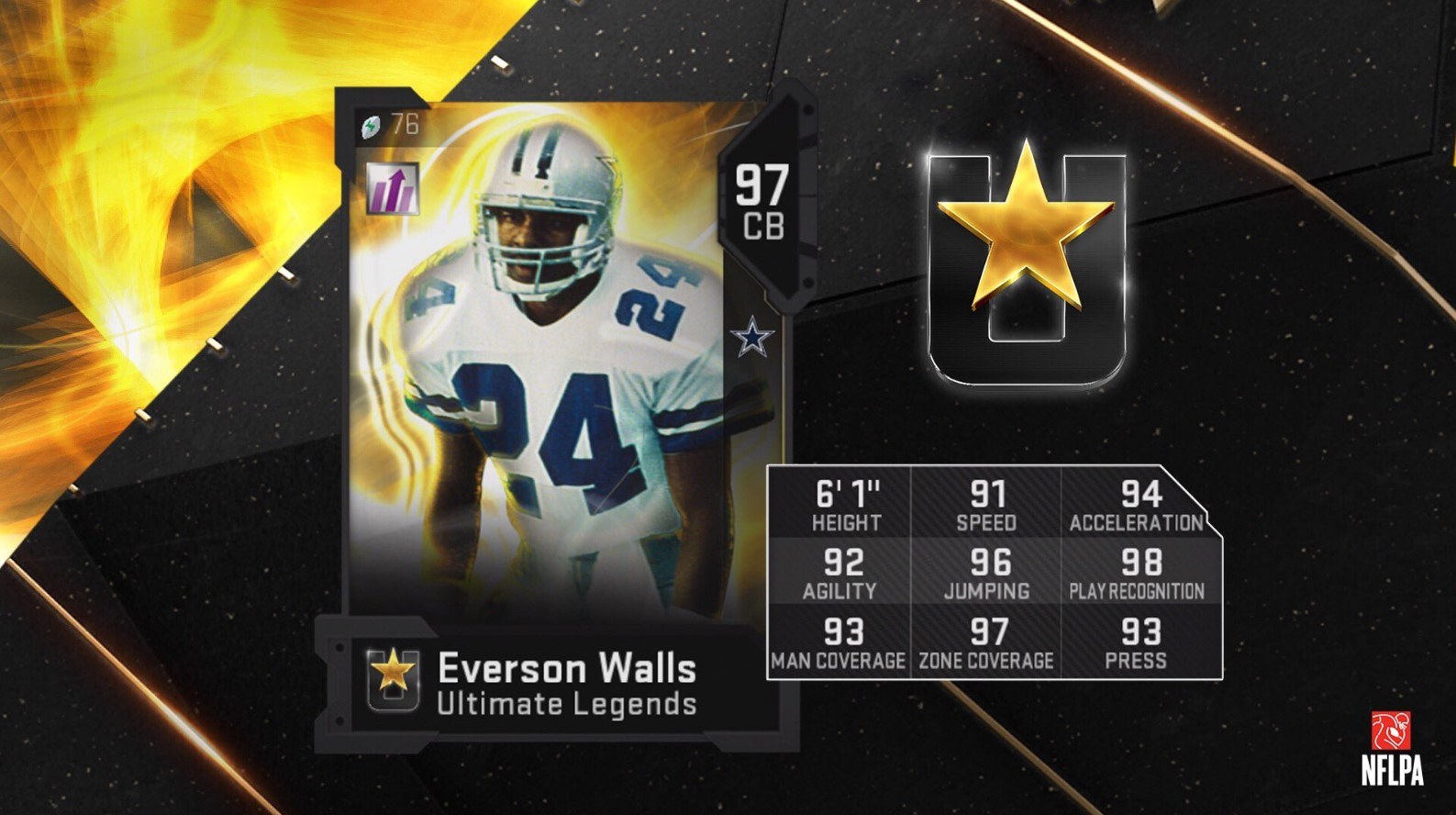 Everson Wells got a nice upgrade with the latest Madden Ultimate Team drop.

Walls will essentially need to be powered up to be of any use, unfortunately, as his base 91 speed on the 97 overall item is simply not good enough to keep up with the litany of options available in Madden Ultimate Team at the moment.

Similar to the criminally unfair ratings on older legend cornerback Mel Blount, EA’s decision to sandbag NFL athletic legends from 30 to 40 years ago is frustrating and doesn’t do justice to some of the premier players of “way” yesteryears. 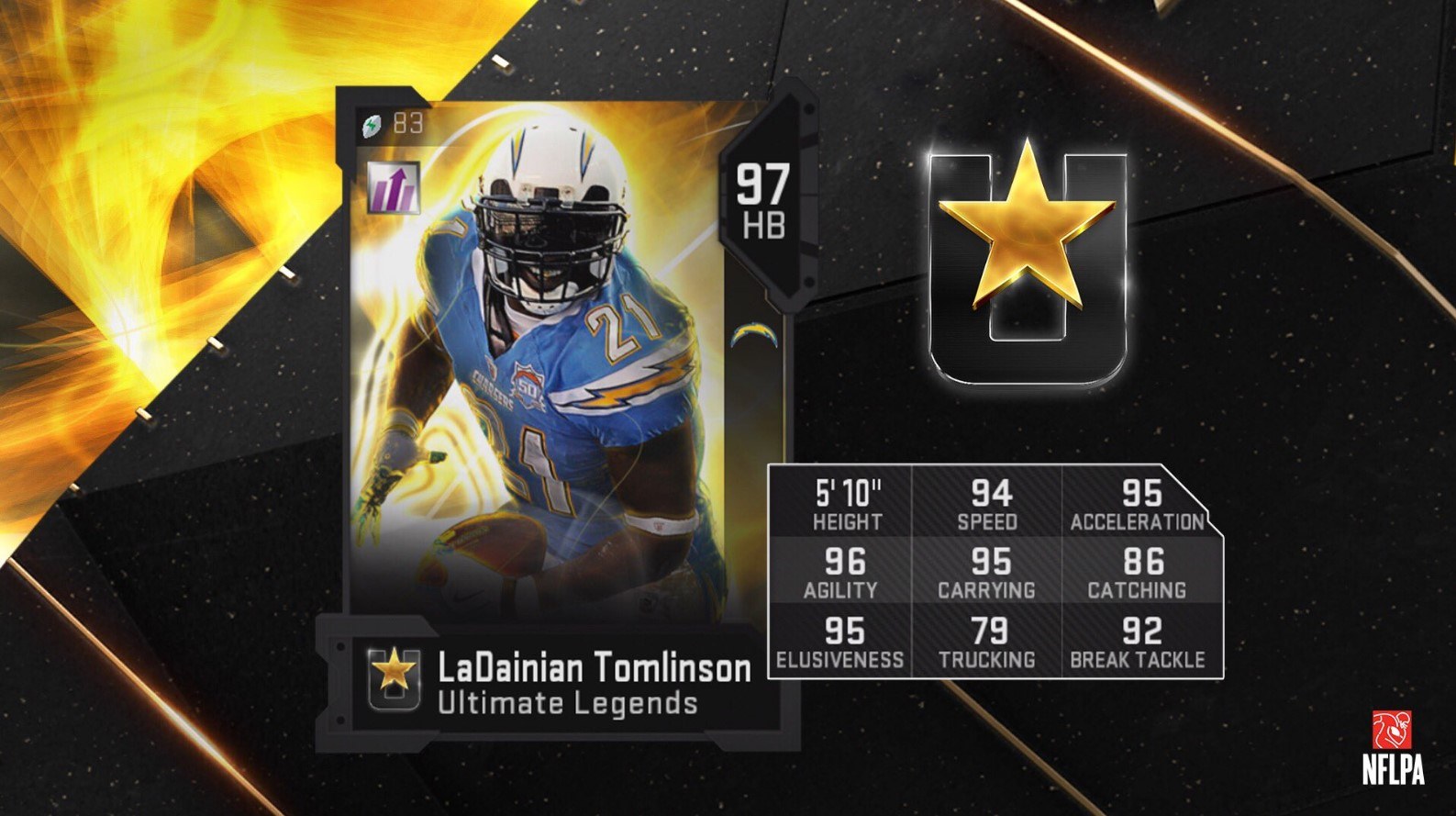 LaDainian Tomlinson also received an upgrade Saturday, improving dramatically upon his base 93 overall Legends card which dropped in mid-November.

With the likes of Rookie Premiere 98 overall Saquon Barkley and the newly-minted 97 overall Ricky Williams widely available, it’s difficult to recommend Tomlinson, if only due to more cost-effective options elsewhere.

Already blessed with a Power-Up thanks to his earlier iteration, Tomlinson could easily achieve 99 Speed in a Chargers or Jets theme team, which might persuade a few users to try out the all-time single-season touchdown record holder. 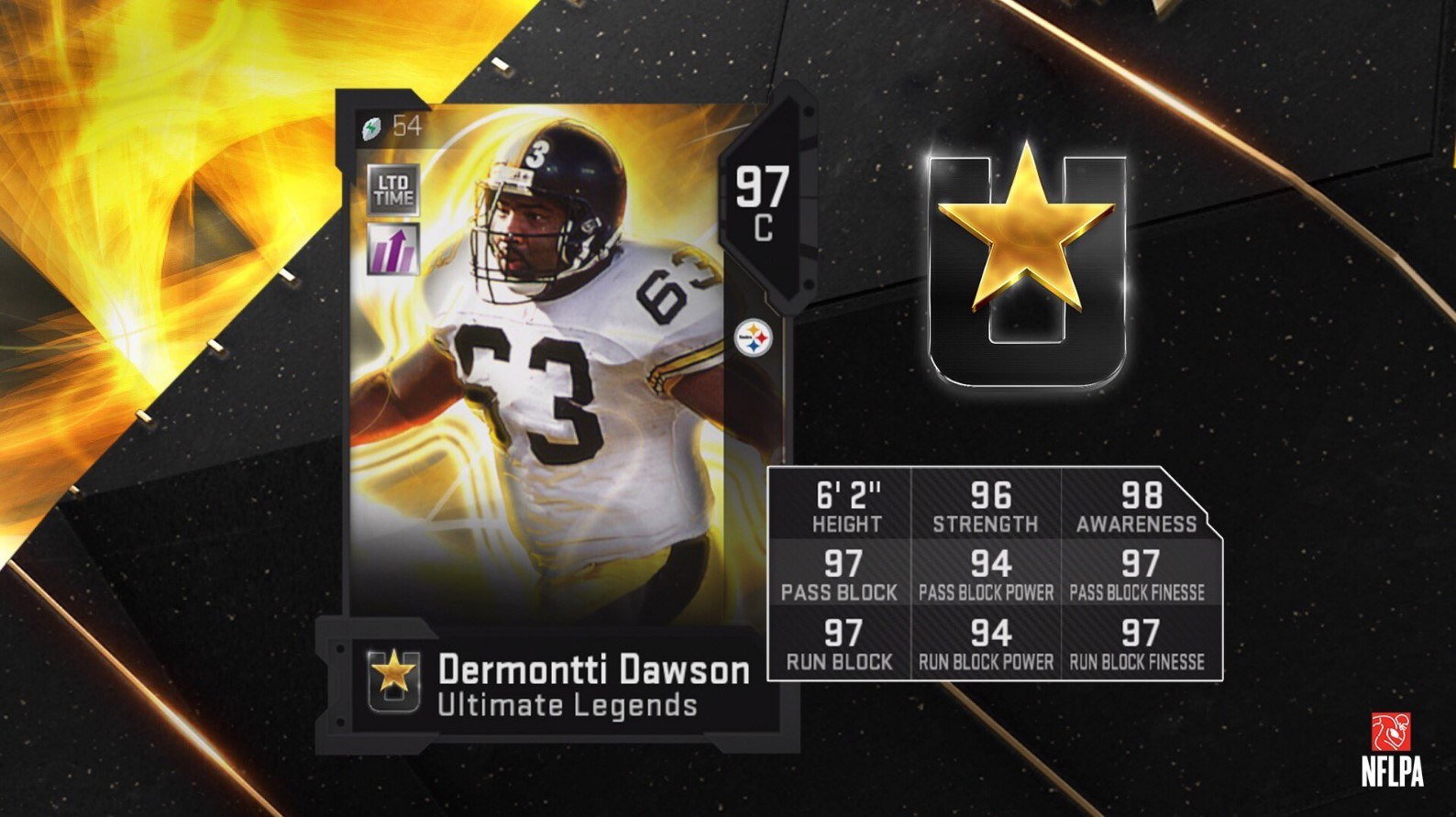 Dermontti Dawson rounds out the trio of Ultimate Legends, earning the unenviable Limited Time designation. The decision-makers at EA at least had the common decency to make Dawson, who already had a Power-Up version thanks to his 92 overall base Legend which dropped in October, the LTD which should help those interested in acquiring Walls or Tomlinson achieve the feat at a reasonable price.

That last point needs to be repeatedly lauded in the coming weeks, as a number of LTD Legends have become obsolete almost immediately thanks to their inability to receive any sort of noticeable attribute boost and untenable price. So long as EA continues to provide Power-Up means to cards that previously were without them, #MUTSeason, which has been paraded in a litany of MUT streams as of late, might just wind up being a success.

It’s hard to imagine a center really being worth the price of an LTD item, even one as solid attribute-wise as Dawson, and it doesn’t help matters that the Steelers legend only played for one team in his entire career.

Given this latest upgrade to Dawson is only 97 overall, in line with the two non- LTD items also released on February 16, it seems fair to suggest he’ll see at least one more upgrade at some point throughout the final few months of Madden 19.