Fortnite Battle Royale Cattus event: Everything we know so far

Fortnite Battle Royale players have theorized that a Godzilla: King of the Monsters crossover is coming soon in the upcoming ‘Cattus event’, with a mysterious monster destroying parts of the map during Season 9, but new leaked information certainly throws a spanner in the works.

Epic Games has not shied away from strange happenings in the past and now their overarching Polar Peak easter egg mystery looks finally set to come to an end. The event, which has been labeled as the Cattus event, is seemingly set to take place under the polar biome.

Yet, if some new fan theories turn out to be correct, there might be more than just a one-off in-game event getting underway, as some players believe that a crossover with Godzilla: King of the Monsters could be in the works. Here’s what we know so far. 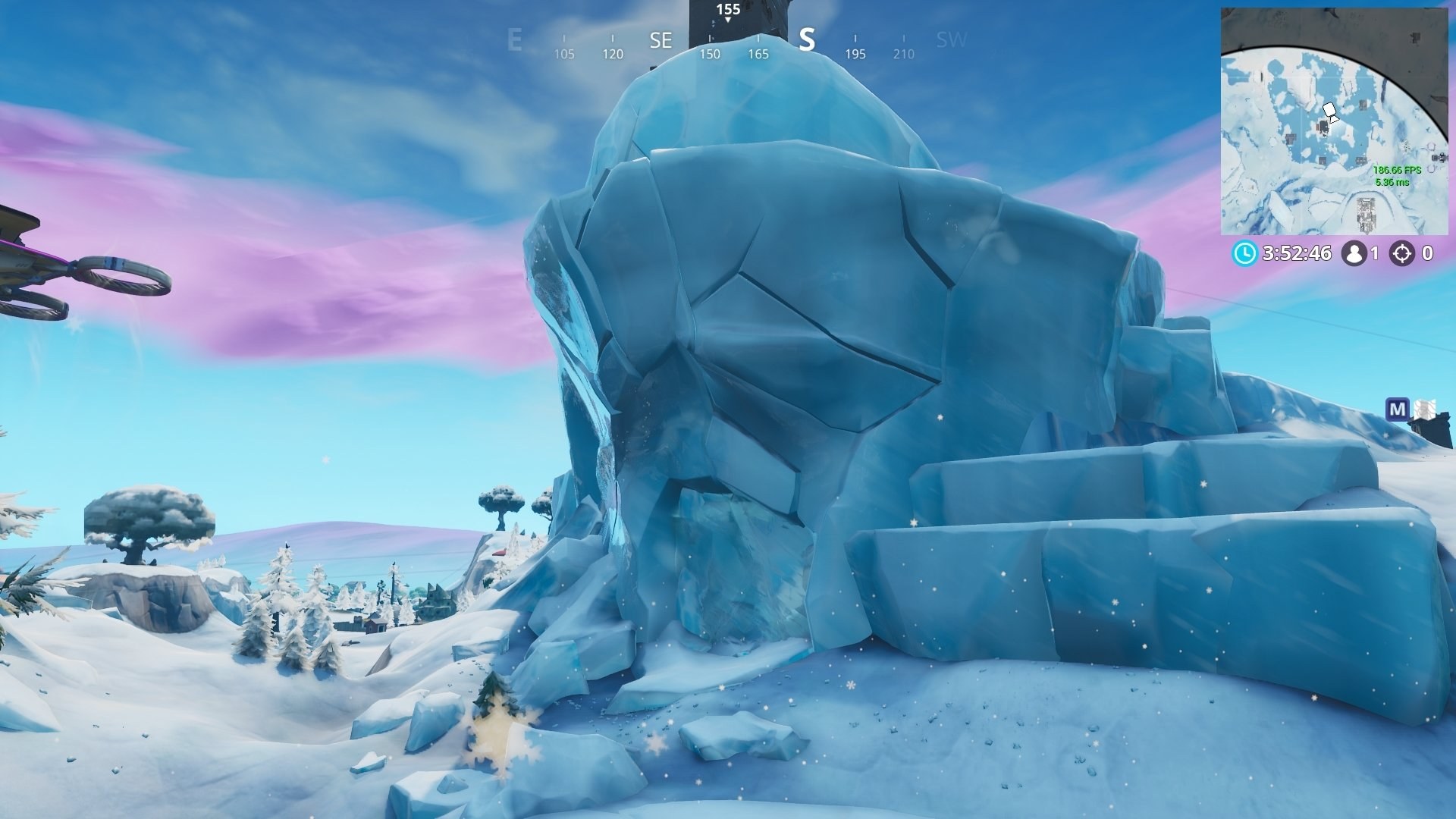 Polar Peak has started to crack in Fortnite Battle Royale.

Back on May 22, players found that a part of the Polar Peak iceberg has begun decaying and is set to play a role in an upcoming event.

Since then, leaked information from the Fortnite Battle Royale game files, following the map changes made in the v9.20 update, seem to foreshadow the total demise of one of the map’s largest locations. Some of the iceberg has already fallen, but what’s left might not last much longer.

First of all, it was revealed that something was underneath Polar Peak and it looks now as if the ice berg and more is going to fall in the near future.

Wind/sounds are coming from massive new cracks In polar peak! Something trapped Inside trying to break out? pic.twitter.com/nY3OUSJhhp

The Iceberg has fallen pic.twitter.com/5yzBmzUYjj

That speculation also ties into the Godzilla crossover idea as a monster from the movie –  King Ghidorah – is seen trapped in ice, waiting to wake up and wreak havoc on the world.

HappyPower took the theories further with a leaked game file, showing an eye that also looks pretty similar to Ghidorah. It has since appeared at Polar Peak.

Is a Fortnite and Godzilla crossover happening?

To some fans, it may seem a little far fetched considering the movie has already linked-up with PUBG for some promotion, but the evidence does seem to mount up.

There’s been an interesting development at Polar Peak that might well give us an indication of what those eggs were doing there after all, and there has since been some audio found in the v9.30 update files – leaked by Lucas7Yoshi – which might well have revealed the sounds that the monster will make in the future. 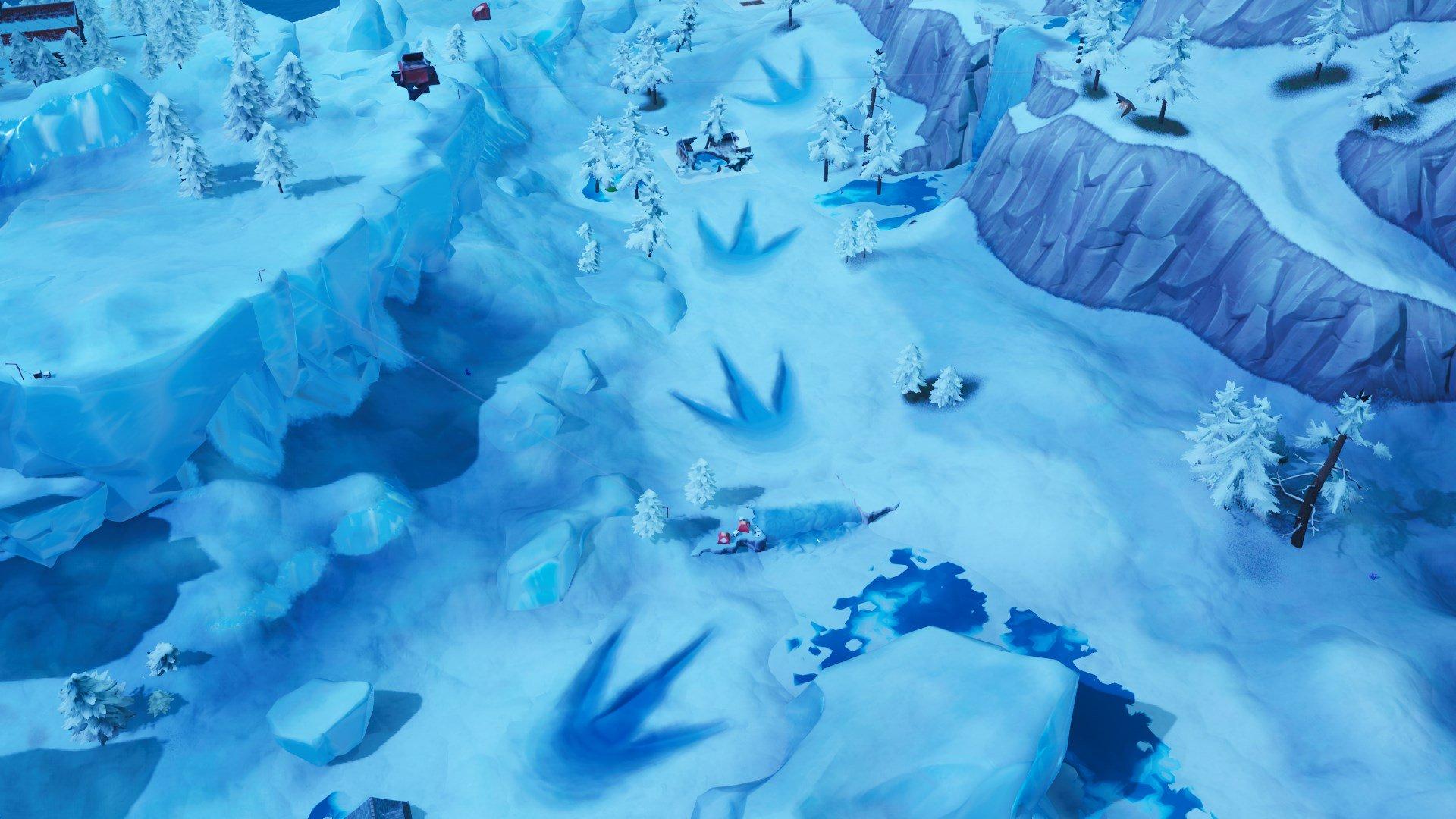 Whatever it is, it’s on the move in Fortnite Battle Royale.

Could it be Godzilla?

On May 25, YouTuber HappyPower also noted some other hints that have already appeared in-game, which could be linked to the new movie. Yet, the first real link stemmed all the way back to the start of the new season.

Even though the volcano eruption in Fortnite Battle Royale served its purpose, allowing for Tilted Towers and Retail Row to be reimagined as Neo Tilted and Mega Mall, it can link to Godzilla. In the first trailer for the new movie, one of the monsters – Rodan – is seen above an erupting volcano, looking similar to the volcano eruption from the Season 9 trailer.

While it may not seem like much, one of the ‘dragon’ eggs that had been uncovered under Polar Peak back in Season 7 had popped up under the volcano in season eight – giving some sort of credence to the theory. Yet, the speculation doesn’t end just there.

Bruh are we really getting a Godzilla Collab or something :monocle::joyful:

(Thank you Chris for these) pic.twitter.com/erIe20hi2Y

In a further follow-up tweet, the YouTuber uploaded a short clip that compared a leak sound file from an upcoming in-game event that sounded eerily similar to Rodan’s role in the movies trailer.

Fortnite Battle Royale players have been trying to work out whether or not the Cattus event will result in the emergence of Godzilla, a dragon, or any other monsters… and more than one spanner has been thrown in the works by Epic Games.

As seen by Reddit user createdbyeric, clearly a sea monster spotted swimming around the map with parts of its old home on its back – on June 10.

That’s not all. While there might have already been some huge footprints discovered on the map, if players somehow missed those, the Cattus monster has more than certainly made its presence felt by destroying parts of the Loot Lake location on June 18. 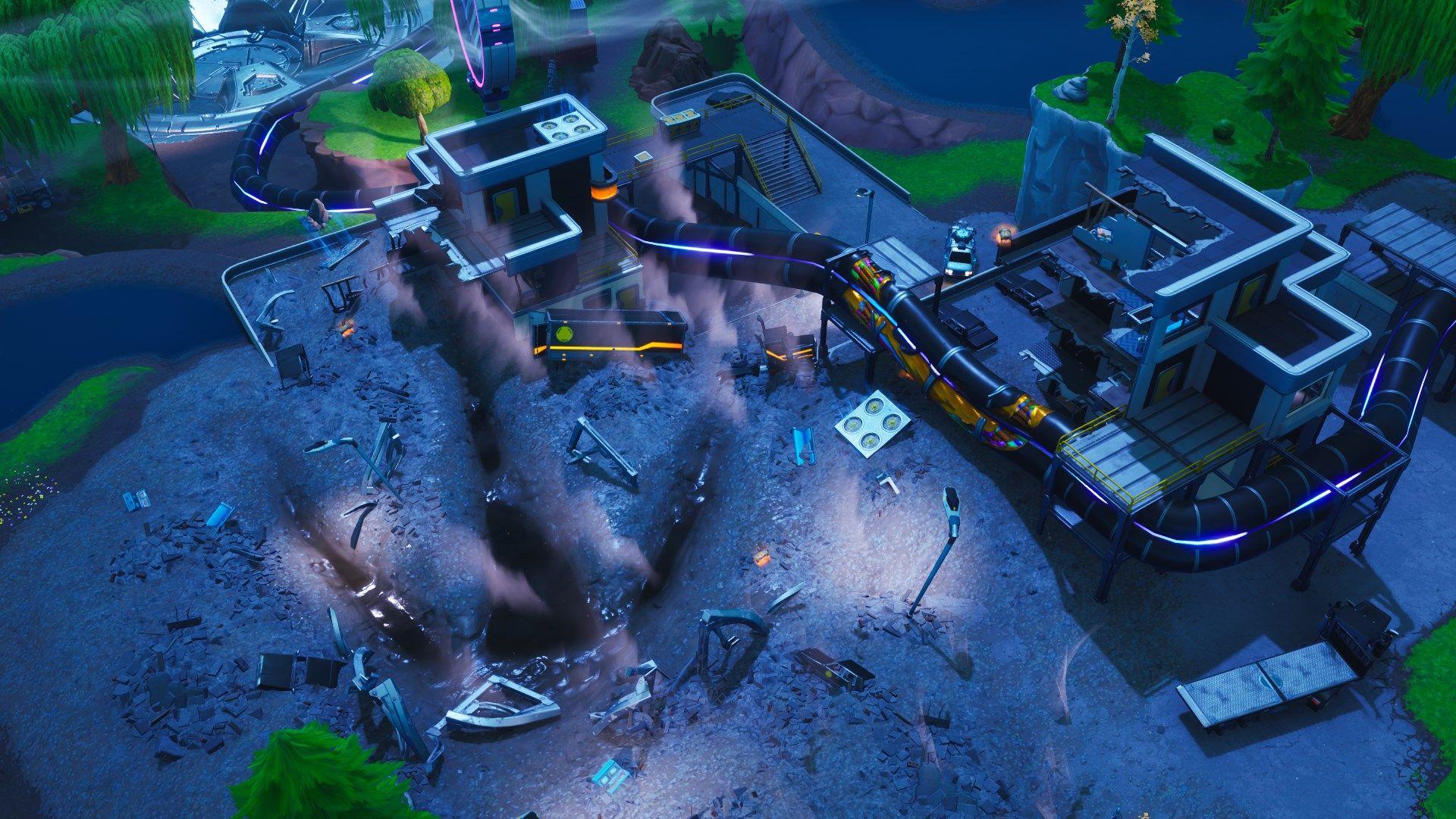 If people didn’t believe the Cattus monster existed, they do now – following the Fortnite v9.30 patch. 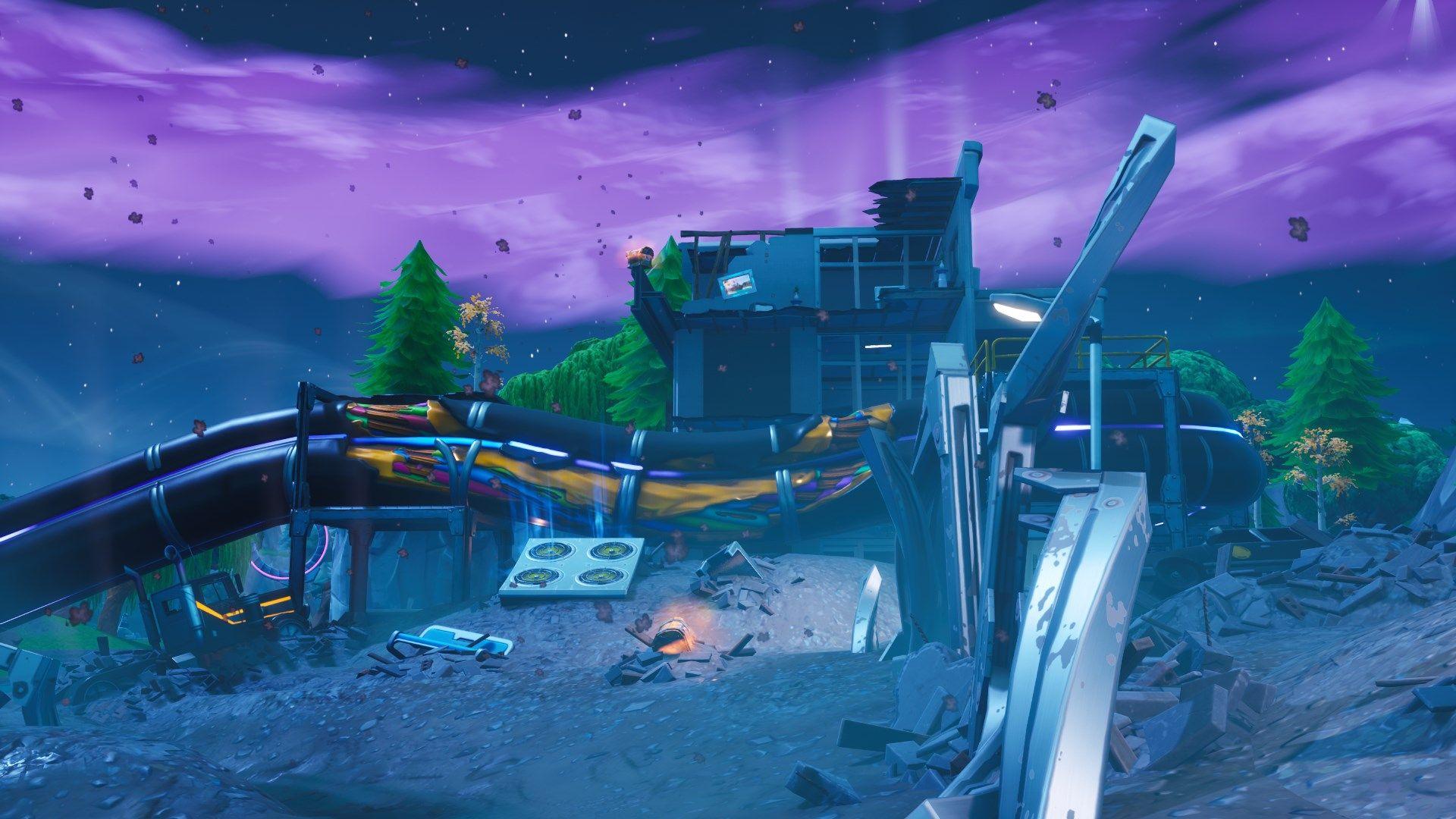 Loot Lake has changed a lot since Fortnite Season 1, but it’s now been stepped on by a giant creature.

Fortnite fans are now theorizing that a change to the Pressure Plant point of interest could be connected to the upcoming Cattus event, with claims that the structure unearthed below the volcano may be a cage to capture the monster.

Having not seen the true size of the beast running around destroying parts of the map, it’s uncertain if it would fit or not. But, that’s the latest theory.

A cage for the monster? from r/FortNiteBR

New potential Cattus event details have really thrown a spanner in the works for players that were hoping for a Godzilla crossover in Season 9, as leaked poster graphics may link the event to a new Season 10 theme.

Some fans have already theorized, having seen the graphics, that the Cattus event could finally allow Epic Games to introduce a military-themed area to the battle royale map – something that’s been rumored for a long time now. Not exactly a massive hint towards a dinosaur appearing on the map, of course, but many players will still be hopeful.

Leaked posters related to the “Cattus” event. from r/FortniteLeaks

While the wait continues for the Cattus monster to strike again, players have uncovered placeholder textures outside of the map in creative mode.

The discovery has been posted multiple teams to the FortniteBR subreddit, with user … giving us the clearest view of all. The textures, which show up as different colored blocks, are visible outside of the map but, as of writing, it is unknown if you can interact with them.

Sooooo. we just gonna let this slide? from r/FortNiteBR

The date has been set!

The timer is present above all of the sky platforms scattered across the Fortnite landscape, leading to speculation that players will be forced to watch the event from above.

The countdown for the event has started…..

It has been weeks since Fortnite players caught a glimpse of the monster that had been wrecking parts of the map swimming around the island, and it’s back!

With speculation mounting surrounding a potential Season 9-ending clash with the huge robot being constructed at Pressure Plant, the Cattus creature has been spotted swimming nearer the battle royale island – with Polar Peak’s castle still on its back.

Is the clash of the giants going to come sooner than we think?

As of yet, no one is exactly sure as to what Epic has planned with the Cattus event, but there’s certainly a huge predator on the move and a lot of new details emerging frequently.

However, stay tuned to Dexerto for the latest breaking news and updates about Fortnite Battle Royale as the picture is starting to become a bit more clear with every passing update and datamine.