With Season 11 just around the corner in Fortnite Battle Royale, Epic Games have finally released a teaser for ‘The End’ event and possibly Chapter 2.

The ending of Season 10 and subsequent launch of Season 11 in Fortnite has a lot of players understandably excited about what lays in store for them in the popular battle royale title.

However, with just two days to go, there had still not been any official teasers released about the new season, which worried some fans as Epic, in the past, have usually started posting them several days ahead of time.

Finally, on October 11, they tweeted out the first teaser image, which ironically turned out to be one that had already been leaked several weeks ago and used countless times in reference to The End event.

The picture features several of the game’s iconic characters and skins, such as the Skull Trooper and Jonesy, all waving goodbye to the Battle Bus and it soars away, with the sun setting beautifully in the horizon.

The End is near.

The tweet came with a caption as well: “The End is near. 48 hours…” indicating that The End event will be kicking off at 11 PM PT / 2 PM ET on October 13, something which had already been determined by the floating in-game countdown timer.

It’s likely that Epic will follow this up with another teaser on October 12, probably tweet it out around the same time, which would be 24 hours before the event kicks off.

What does this new teaser tell us?

There are two main things that this image tells use. Firstly, it essentially confirms what everyone has known for a while, that the transition between Seasons 10 and 11 will be called The End, which is going to be an in-game event in all likelihood.

Secondly, it reaffirms all of the theories and leaks that there is going to be something drastic that happens involving the current Fortnite map. 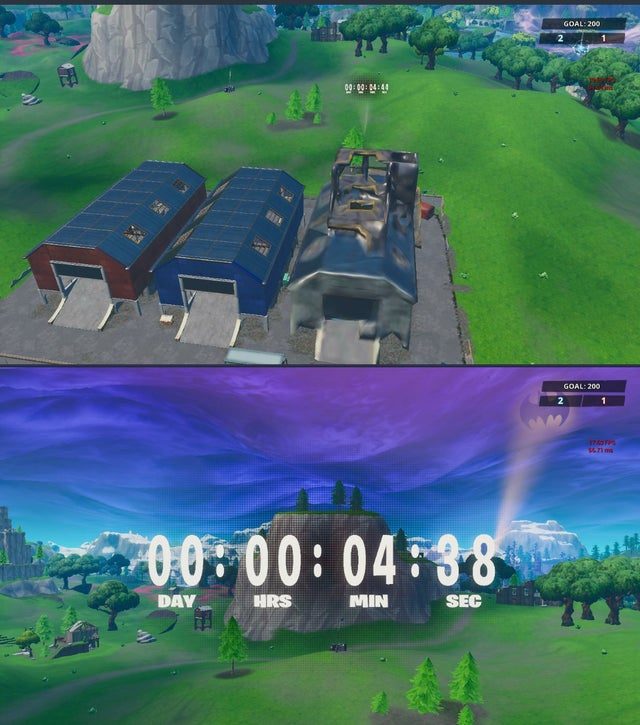 The countdown in Dusty Depot reveals when ‘The End’ event will kick off in Fortnite.
[ad name=”article5″]

The two most realistic scenarios are that the map will either be completely destroyed and a brand new one will be added, or a lot of what currently exists, such as the biomes and named locations, will be removed and replaced with new ones.

The general consensus is that Epic have gone with the first option, which was indicated by a leaked Fortnite thumbnail on the iOS App Store which showed a glimpse of the brand new map, calling it “Chapter 2.”

In addition, this set of names for new locations was found in the v10.30 update a few weeks ago and leaked, at least some of which are expected to make their debut in the next season:

At this point, leaks and speculation can only take us so far, and the only way to find out what actually lays in store for us is to wait for The End event to kick off on Sunday.