Twitch streamer Johnny_Now had his cage rattled while attempting to stay inside of one for 30 days after possible gunshots rang out in his neighborhood.

During day two of Johnny’s “in a cage for 30 days” challenge, a barrage of loud noises woke the streamer from his slumber at 3AM. Despite having headphones on, when the noises began, Johnny tossed them aside and went to investigate.

“Oh my God, this is crazy,” the streamer said while still half-asleep and wandering about in his cage. “That’s insane. What time is it?”

After seeing that it was 3 in the morning, Johnny swore under his breath and explained the situation to his viewers who were watching him sleep.

“We’ve had a bunch of shooting in the city lately. So, when I heard that, I thought someone was getting murdered,” he said as another series of bangs rang out, prompting the streamer to get up once again.

“I think there’s a fire at this guy’s house and they have fireworks in it, because this is insane,” Johnny added.

After further investigating, he came back to his stream yet again to report his findings, still unsure of what happened himself. “So I thought it was gunshots because it was like ‘boom, boom, boom’ – someone’s in the middle of a construction site watching the fireworks, but that, there’s no way a human set those off.”

According to the streamer, due to the rapid bangs, there was no way it could have been fireworks unless someone lined a bunch of them up in a row. “That scared me!” he admitted before rolling right back into bed and wishing his stream goodnight.

As Dexerto previously reported, Johnny originally spent 30 days inside a cage back in October 2018 in an attempt to cure himself of a fast food and soda addiction.

While his original cage stream resulted in a lot of content because viewers could donate to make him perform tasks, he had a difficult time creating content since. 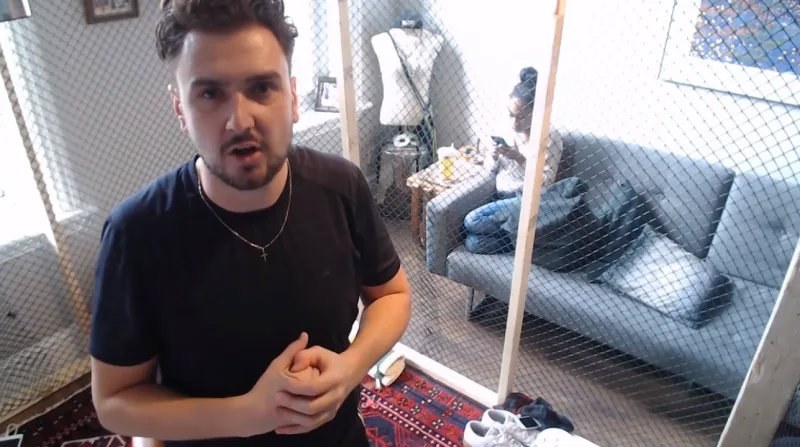 Johnny_Now first locked himself inside a cage in 2018.
[ad name=”article5″]

“I had forgotten everything I fought so hard for in the cage, and slowly replaced it with a crazed desire for mediocre content creation,” Johnny explained to Dexerto. “I did horrible things that both me and my family are ashamed of. The pig stream, where I method acted being a pig, 12 hours of Chinese water torture, drinking Belle Delphine‘s bathwater, the human hotdog stream, and I’m sure my chat would add many more.”

Considering that craziness happens even when Johnny is trying to sleep, it’s likely the caged streamer is getting his content fill. Only time will tell what other crazy shenanigans he gets himself into.