Felix ‘PewDiePie’ Kjellberg has a lot to celebrate as he just surpassed 100 million subscribers on YouTube on August 24, making him the first individual creator to do so.

PewDiePie is the second YouTube channel to break 100 million subscribers, trailing close behind the Indian owned corporation T-Series. Despite this, he is actually the first individual creator to hit the major milestone.

Despite being the second channel to reach the subscriber count, the Swede has long been a part of the YouTube community as an individual content creator, making the feat all the more impressive. 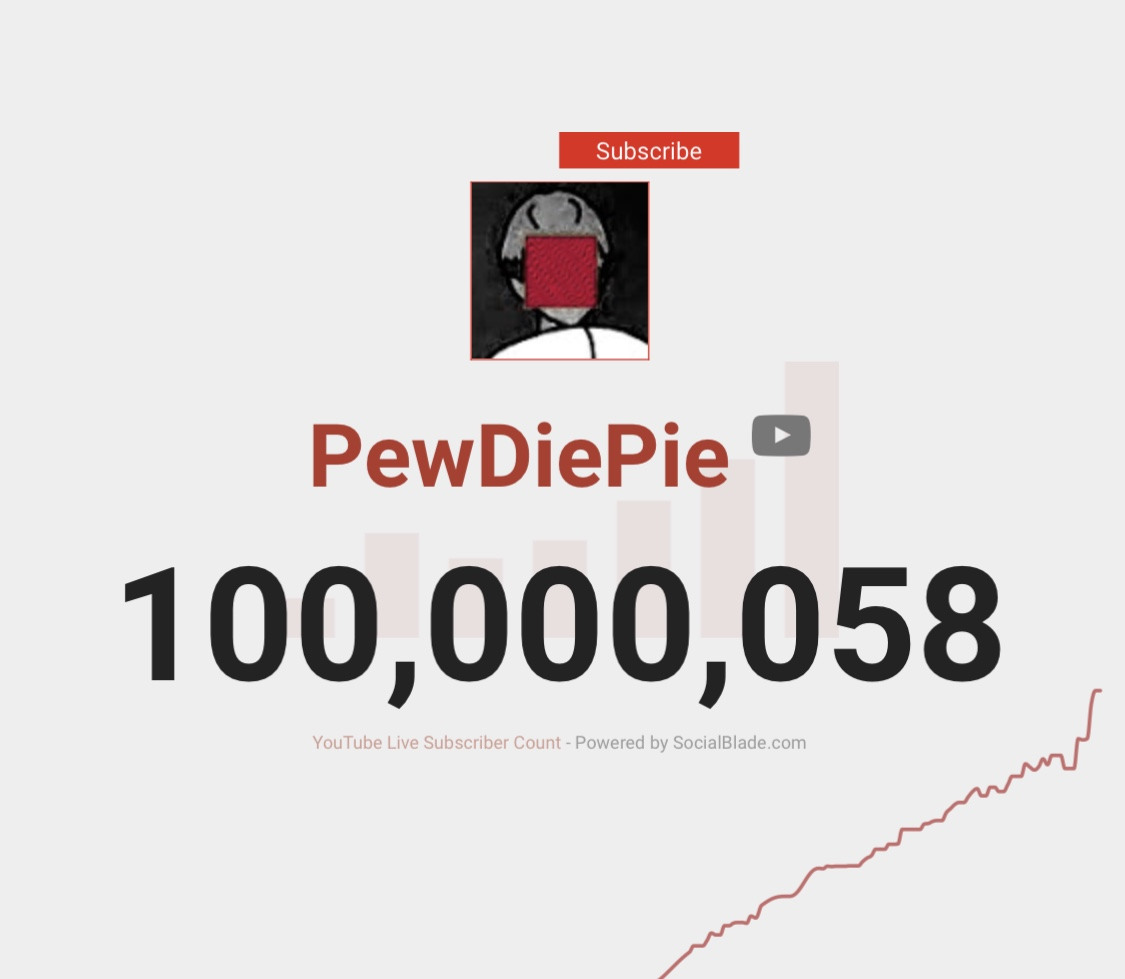 Much of the channel’s growth in the last year has been fueled by the ‘PewDiePie vs. T-Series’ feud that saw the YouTube community rallying behind the Swede in a movement to keep the content creator as the most subscribed channel over T-Series, which is a corporate owned channel.

While PewDiePie went on to lose that battle, it had become a cultural phenomenon, and also spawned Pewds’ two popular diss tracks called ‘Bitch Lasagna’ and ‘Congratulations’ which have over 100 million views each.

The former released immediately after T-Series passed him in subscribers and even led to a lawsuit brought on by the India-based company.

After the feud ended, his channel saw another explosion in growth in June of 2019 after the YouTube king returned to his gaming roots, and started to upload daily Minecraft episodes, which largely boosted the game’s popularity in the following weeks.

The Swedish YouTuber originally created his account in 2006, although it wasn’t until 2010 that he would register his second channel under his infamous PewDiePie moniker.

His ‘Let’s Plays’ of the popular horror game ‘Amnesia: The Dark Descent‘ where he screamed at barrels was one of the first things to catch the attention of viewers. In an update vlog on August 18, he reminisced that it was the first time that he fell in love with being a YouTuber.

His weekly vlogs ‘Fridays with PewDiePie’ were also an early favorite among his growing audience. In just under a year, the YouTube star would go from 60,000 subs to 500,000 in 2012. 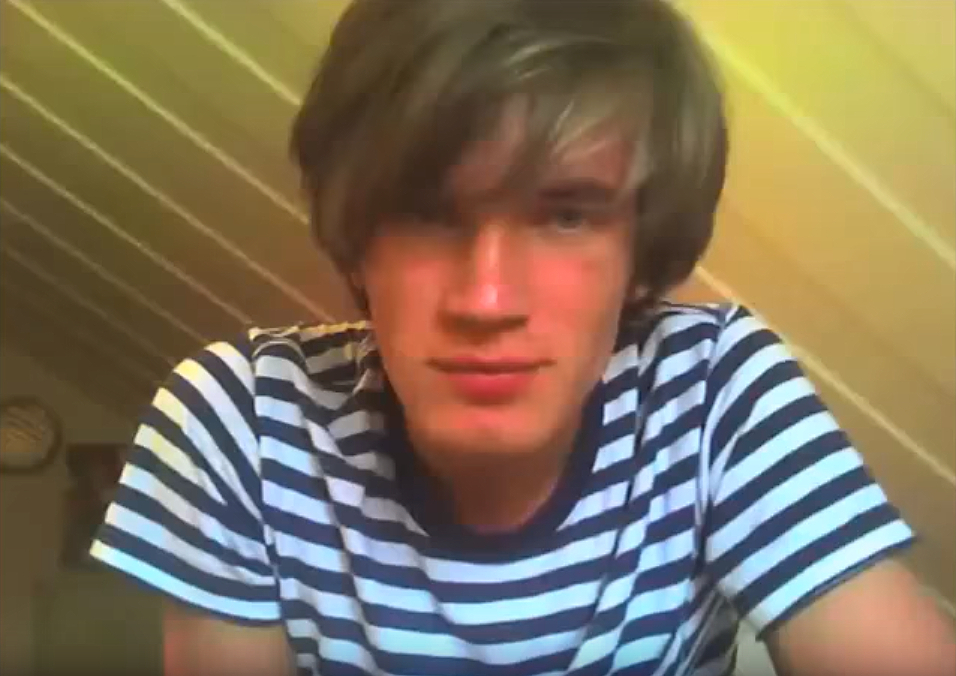 PewDiePie rose to fame with his Amnesia Let’s Plays.

He also saw major growth due to his massively popular ‘Happy Wheels’ videos, where the young Swede gained fame for his explosive reactions.

It was in 2013 that he finally passed Smosh to become the number one most subscribed person on the video hosting platform, as his channel continued to grow at a rapid pace.

Despite his channel being closely associated with gaming, the Swede made multiple format changes over the years.

From the reaction style videos like ‘Pew News’ or ‘Last Week I Asked You’ to his highly popular ‘Meme Reviews’ (which even saw Tesla CEO Elon Musk and the infamous Dr. Phil host it), the changes seemed to pay off as they paved the way to this major milestone.

Capping off what has been one of the best years of the Swede’s life was his marriage to his girlfriend of 8 years Marzia ‘CutiePie’ Bisognin on August 19.

The celebration was held at Kew Gardens in London, England where the two had a private ceremony with their closest friends and family. PewDiePie uploaded photographs from his wedding to Twitter and Instagram on August 20, where the world gushed over the couple’s union.

We are married!!! I'm the happiest I can be :heart:️ I'm so lucky to share my life with this amazing woman. pic.twitter.com/RA3iKAgMOs

The YouTube star then uploaded his wedding video on August 24 which documented the emotional evening, from the vows and the speeches to the celebration afterwards.

While Marzia no longer uploads on the website, the two have long been seen as one of the most popular couples on the streaming platform.

The Swede is undoubtedly having the best year of his life with his channel seeing its biggest resurgence yet, his marriage to the love of his life, and his re-discovered passion for being a YouTuber all over again. And now he’s hit the 100 million subscriber milestone.

Whether you love him or hate him, there is no denying that PewDiePie is the YouTube king. He’s the most subscribed individual content creator on the platform, and for years has continuously put out daily videos, while masterfully navigating the trends – and it’s certainly paid off.

As the current queen of TikTok, Charli D’Amelio is no stranger to being swept up in internet drama — but a recent rumor involving her family has caused the star to lash out in a series of social media posts.

Charli D’Amelio is TikTok’s most-followed content creator. Boasting over 106 million fans on the viral video app, Charli saw a huge surge in growth throughout 2020, acquiring her own makeup line and even scoring a partnership with Dunkin’ Donuts, among other accomplishments.

With great internet fame comes great… drama, apparently, as the youngest D’Amelio sibling also found herself in a slew of “scandals” last year — and the turmoil isn’t over yet, as the New Year seems to be kicking off with a disturbing rumor regarding Charli’s parents.

The rumor itself, circulating online via comments on Instagram tea pages and TikTok fan accounts, alleges that Charli is unhappy being an influencer and is “forced” to post TikToks by her parents to keep up with their elevated lifestyle.

The D’Amelio family have been a source of near-constant rumors and speculation among fans ever since Charli and Dixie’s rise to fame.

However, Charli has vehemently denied these claims, as told in a series of biting comments via TikTok on January 18, 2021.

“I am so fortunate to have such amazing parents, and when people spread fake, hurtful and false rumors about my family, I have to put my foot down,” she began.

“I have an amazing dad and family who have never hurt or taken advantage of me, ever. Please stop spreading these lies. If I am not in the mood to post, I don’t. No one is forcing me. My parents care about my mental health more than anything.”

It seems that Charli’s reply has been met with mixed reviews among critics, who claim that the star is avoiding responsibility for a recent Bahamas vacation — but this is far from the first time the D’Amelio’s have had to address similar rumors that spiraled out of control.

Last year, Dixie released a comparable response after fans claimed that her parents treated her poorly and “worse” than her younger sister, with YouTube drama channels pointing out moments in family videos where the eldest D’Amelio sibling was being teased.

Dixie was very blunt with those making accusations of her parents’ alleged favoritism.

Luckily, both stars shut down the rumors quickly and brutally — although there’s no telling what other theories fans are bound to come up with in the future.