Logan Paul “congratulates” Tfue on his relationship with Corinna Kopf

Controversial YouTuber Logan Paul turned 24 on April 1, prompting him to undertake a series of 24 insane challenges in celebration of his birthday – which ultimately turned into an insult toward Twitch streamer and Fortnite pro Turner ‘Tfue’ Tenney.

In addition to pouring liquid nitrogen on his testicles and performing a handstand in a ring of mousetraps, Paul also challenged himself to compliment 24 YouTubers – one of which was Tfue.

“Tfue, yo, you’re killing it, bro,” Paul began, going on to reference Tfue’s relationship with Instagram model Corinna Kopf. “And congrats on the new girlfriend.”

Paul’s “compliment” appeared to be thinly-veiled shade, as he stifled a laugh and went on to give the camera a knowing look while downing a glass of water.

His comment didn’t come out of nowhere; Paul and Kopf had a “casual” relationship before ultimately splitting ways in mid-February, leading to a major rift between the two personalities in the wake of serious drama.

While Logan Paul and Corinna Kopf never directly confirmed their relationship, the two were spotted cozying up together at a Lakers game – and even subtweeted each other over Twitter.
[ad name=”article3″]

This wouldn’t be the first time Paul has taken shots at Tfue, either; the YouTuber seemed to flex on Tenney during an episode of his ‘imPaulsive’ podcast in late January, while he was still in a relationship with Kopf.

Although Paul appeared to joke that he had “stolen” Kopf from Tfue, the two later broke up, after Kopf sent out a suggestive Tweet toward YouTuber KSI on Valentine’s day that had the YouTuber and his crew sending out heated reactions on Twitter. 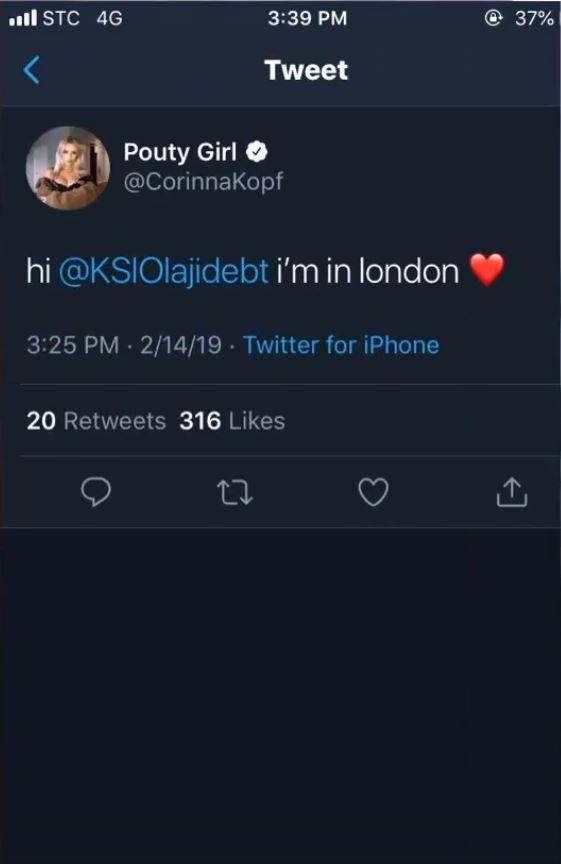 Kopf’s Tweet toward YouTuber KSI prompted a slew of reactions from the Maverick team, appearing to end her relationship with Logan Paul.
600

While Tfue was rumored to have dated Corinna ahead of her fling with Paul, the two confirmed their relationship shortly thereafter with a series of intimate photos on Instagram.

Following their breakup, Paul claimed that he was done dating girls in the YouTube space, and even accused Kopf of “running through the YouTubers” – which prompted a scathing reaction from the Instagram model.

damn some men are so disrespectful in the way they talk to women… your mother would be so proud :,)

“Damn, some men are so disrespectful in the way they talk to women,” she wrote of Paul’s comments. “Your mother would be so proud.”

Since then, Corinna and Tfue have been humorously opening up about their relationship bit by bit, with their latest joint appearance being a streamed game of Fortnite – in which Kopf jokingly teased Tfue for always complaining about the game.