Popular YouTuber, model, and Facebook Gaming streamer Corinna Kopf was slammed by a critic for allegedly receiving plastic surgery — but she wasn’t shy about setting the record straight.

Corinna Kopf is no stranger to receiving heat online, after going public with ex-boyfriend and Fortnite pro Turner “Tfue” Tenney in early 2019.

Corinna Kopf made the huge jump to Facebook Gaming as her exclusive streaming platform in 2019 – but not everyone was happy with the move.

One critic took issue with an Instagram post Kopf uploaded in late January, where she posed with plastic surgeon Dr. Sheila Nazarian, captioning the pic, “No one does it better than her.”

The critic screenshotted the post and took the pic to Twitter, where they accused the streamer of “teaching the young and insecure that even if [they] are as pretty as you are, you still need plastic surgery. F**king gross. You should be ashamed of yourself.” 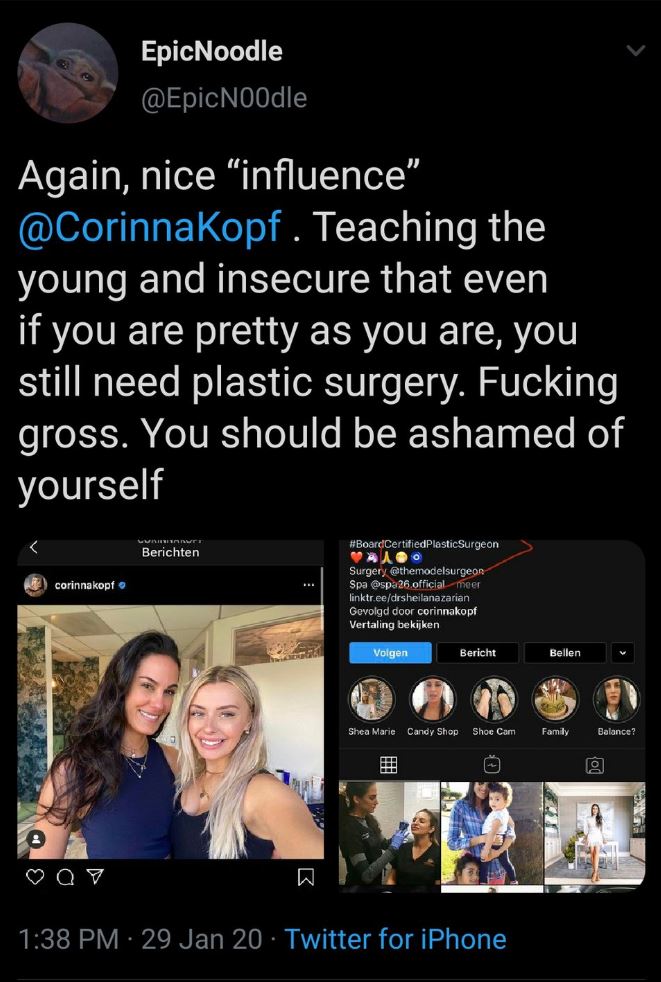 Luckily for Kopf, she’s had ample experience in dealing with the BS, and curated the perfect response for such a wild accusation.

“First off, just because she’s a plastic surgeon doesn’t mean I got plastic surgery,” she clarified. “She offers many other procedures as well. Secondly, I’d rather be open and honest with my audience about my enhancements rather than lying/denying and creating an unrealistic standard. Thanks!”

First off just because she’s a plastic surgeon doesn’t mean I got plastic surgery… she offers many other procedures as well. Secondly, I’d rather be open and honest with my audience about my enhancements rather than lying/denying and creating an unrealistic standard. thanks! https://t.co/LcspJ4sJXU

Kopf has been open about her procedures in the past, as shown by a 2018 YouTube video detailing her experience getting botox fillers in her lips with makeup artist Laura Lee.

In fact, the streamer has posted several videos opening up about such procedures, and isn’t afraid to admit that she’s had work done — proving the point made in her Tweet that it’s better to be open about the matter, considering the message she could be sending to her audience otherwise.

Kopf’s professional clapback follows her massive move to Facebook Gaming in late 2019, which came after popular streamer Disguised Toast’s switch to the platform a month prior, making Corinna the second major personality to exclusively stream on the site in wake of Twitch’s mass exodus of content creators.