Popular Fortnite pro Turner ‘Tfue’ Tenney went public with YouTuber Corinna Kopf in early March, following rumors that the two were romantically involved in December – but now, the couple has broken things off, as Tweeted by Kopf in an emotional post.

Kopf posted a lengthy message to Twitter on July 3, following a brief hiatus from social media that she announced on June 30.

In her post, she revealed that her relationship with Tfue was officially over, admitting that the physical distance between them had a hand in their breakup, among “a few other things.” 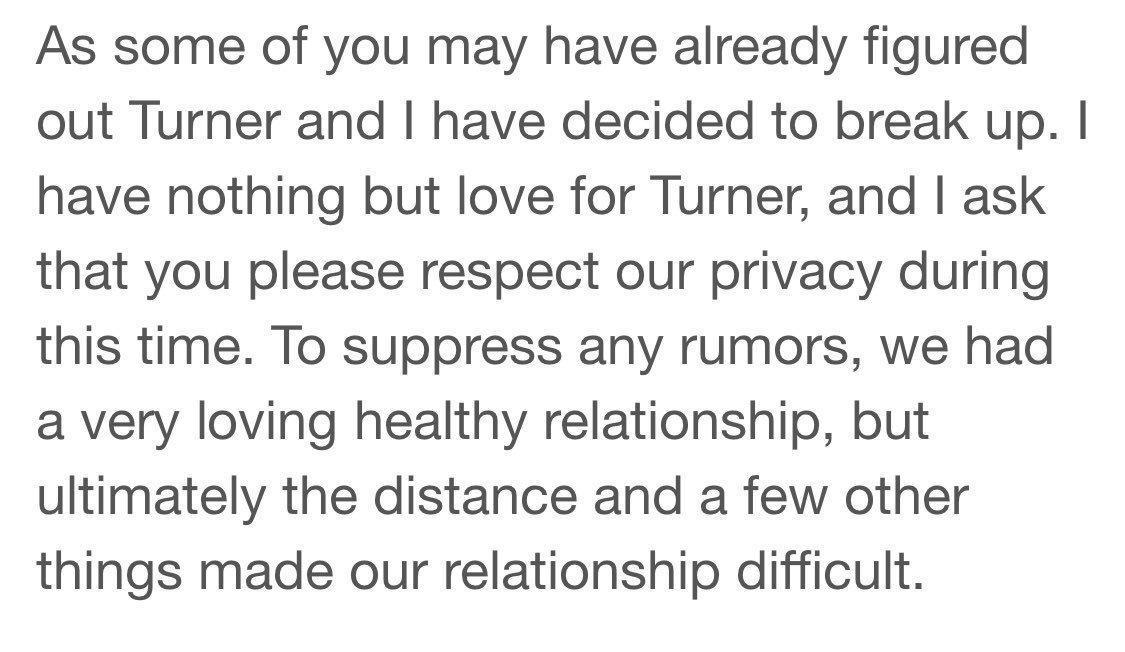 “As some of you may have already figured out, Turner and I have decided to break up,” she wrote. “…To suppress any rumors, we have a very loving, healthy relationship, but ultimately the distance and a few other things made our relationship difficult.”

While Kopf wrote out a full-length explanation to her fans, Tfue merely commented on their split with a broken heart emoji, posted eight hours ahead of Kopf’s writing.

Tfue and Corinna’s split comes in wake of a concerning conversation the two had during a joint Twitch stream, where Kopf “jokingly” asked to “take a break” from Tfue, complaining that he never flew out to see her – although she constantly flew cross-country to visit him from her home in Los Angeles, California.

“He’s only visited me in LA only two times, and he doesn’t think there’s anything wrong with that,” she said. “…All I know is that I go and visit you way more and you just don’t put in effort anymore. I think I’m just gonna do this publicly – I wanna take a break.”

That’s not all: Corinna even claimed that she was “mad” at Tfue in a preceding stream, complaining that the Fortnite pro wouldn’t keep his end of the bargain after making plans with her.

While many took Tfue and Kopf’s “break” conversation as merely a joke, it seems that not all was well with the couple, who got together following Kopf’s short-lived fling with YouTuber Logan Paul – which preceded dating rumors around the couple in late December of 2018.

While many fans have come out in concern for both parties following their recent split, Kopf is coming under fire from angry fans, with some accusing her of being a “gold digger” for dating Tfue in the first place.

In other words “I got all the juice off this gamer, time to head out”.

Tfue and Kopf’s short relationship saw a slew of humorous moments between the two – but with Kopf asking for privacy, it’s unlikely that any further details as to their breakup will be revealed anytime soon.