The first day of action at the Call of Duty League’s Toronto Home Series has wrapped up, and with so many top teams competing, the stage has been set for what should be a very intense weekend portion of the tournament.

There was a lot of attention being paid to CDL Toronto coming in, not only because it was the final Home Series of the regular season, but also since it may be the most stacked event in terms of top teams in attendance.

While no one’s been knocked out yet, the four matches played on Friday determined the stakes that each of the eight squads will be playing for come Saturday, when the field will be cut by half. 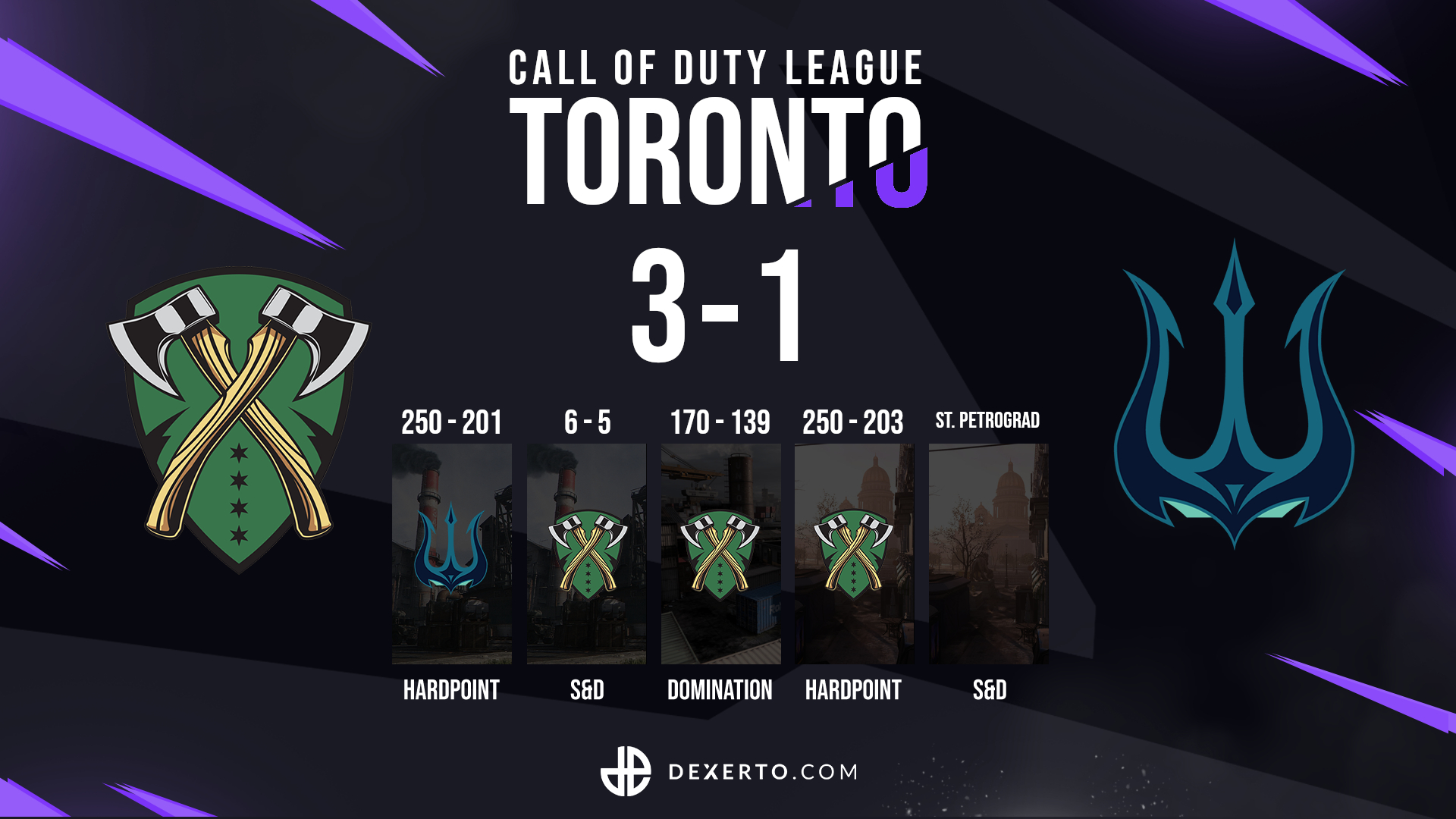 Two teams heading in completely opposite directions, Huntsmen’s 3-1 win over Surge was to be expected. However, the victory was a lot harder to achieve that what many would have thought, especially when the favorites went down 0-1 after losing the Gun Runner Hardpoint.

The following Gun Runner S&D went all the way to a round 11, which Chicago won to tie the series – a huge pivotal moment that could have given Seattle a strong 2-0 lead. Instead Huntsmen got all the momentum they needed to win the next two maps convincingly and secure the 3-1 victory.

Series leveled 1-1: Chicago @Huntsmen come away with the round 11 S&D win over the @SeattleSurge.

It’s now four wins out of five for Chicago, who continue to play well following the recent meta change that’s allowing Arcitys to use an M4 assault rifle. On the flip side, the struggles continue to Surge, who have now lost four in a row, dropping to 5-17 on the season. 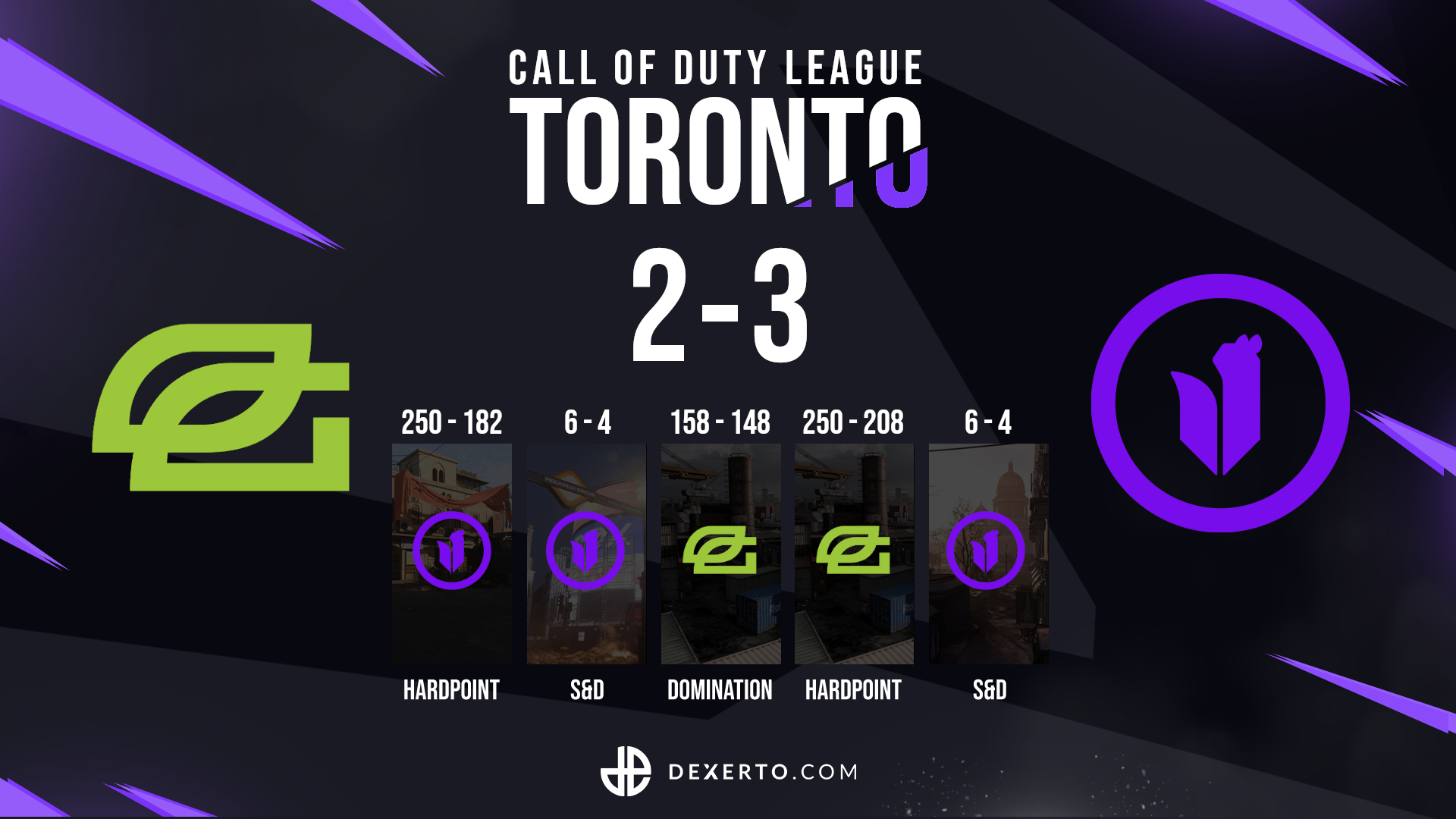 A series between evenly-matched teams, you’d expect this to go to a game five, and it did. It looked like Ultra were going to run away with it early after going up 2-0, but two straight wins from OpTic Gaming tied things up and forced a fifth map.

Just like with the whole match, the St. Petrograd S&D was a back-and-forth affair, but it was the hosts who ultimately clutched for the 6-4 map victory.

The highlight of the series was definitely the first S&D, on Piccadilly, which saw OpTic’s Drazah and Ultra’s Cammy go toe-to-toe in an epic battle. They both dropped 17 kills, an astonishing feat, including an incredible four-kill round from the OGLA rookie that looked way beyond his years.

? @Drazah_ proving he belongs with the pros!

In fact, Drazah was a huge silver lining for Los Angeles, despite the loss. He led the team with a combined 106 kills in the two Hardpoints, 21 in the S&Ds, and 1.37 K/D in the Domination. 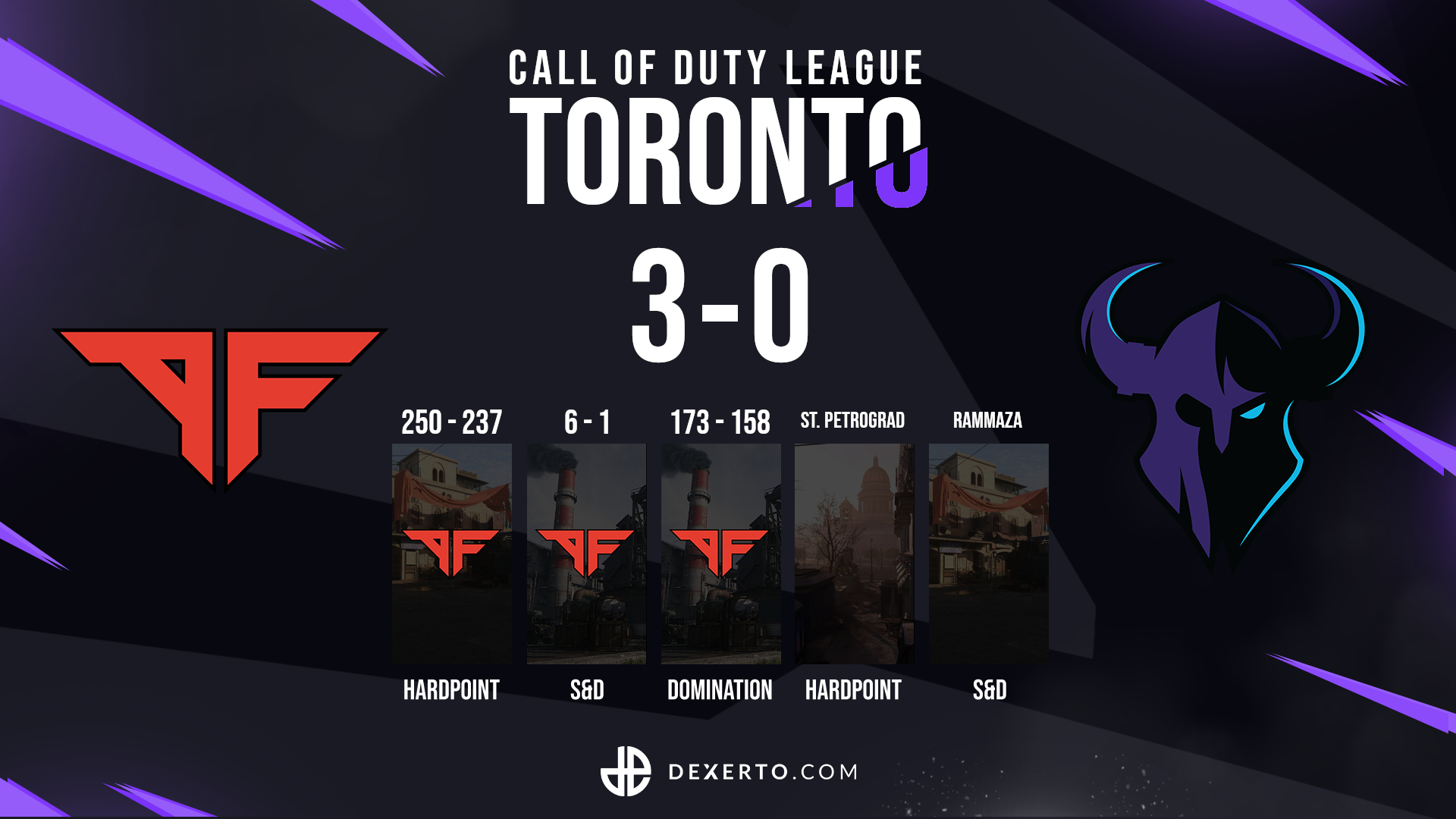 Atlanta FaZe and Minnesota ROKKR were once grouped together as two of the league’s top four teams earlier this season, but that’s far from where the two teams stand now. FaZe are still a contender, there’s no doubt about it, but ROKKR have slipped and slipped heavily, as they’ve now lost seven matches in a row following this result.

The series may have been closer than the final 3-0 scoreline suggests, except maybe for the Search and Destroy, but Atlanta always seemed one or two steps ahead of their opponents, not letting Minnesota ever gain a foothold in any of the three maps.

The stellar play from the boys in red really helped give them the upper hand, such as the late comeback on Rammaza Hardpoint, Simp’s 11 kills in the S&D, and Majormaniak’s clutch 1v2. 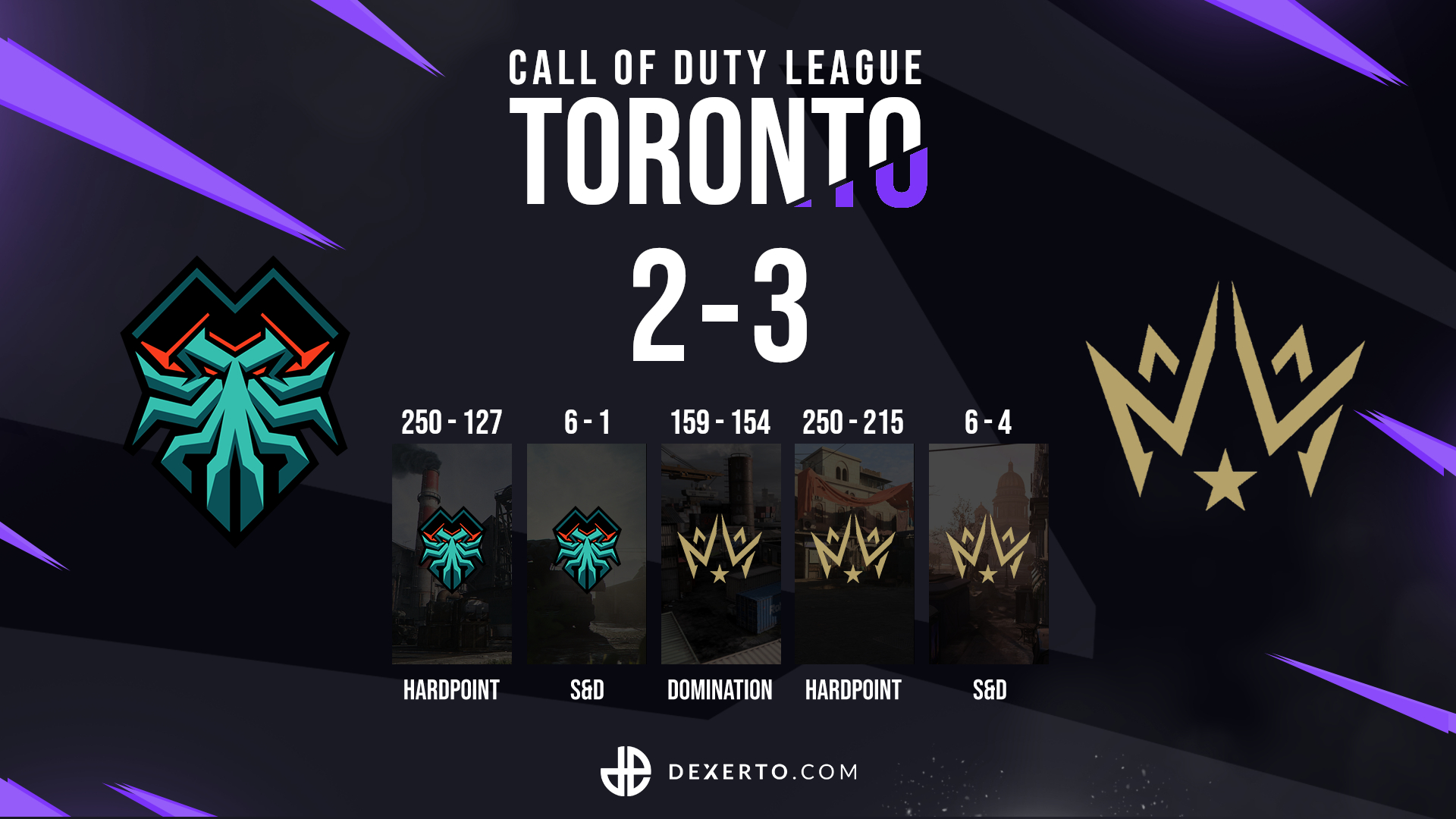 This has been a fun rivalry to follow this season, and their fifth meeting certainly didn’t disappoint. After losing 3-0 to Empire in the semifinals of CDL London, it looked like Mutineers were going to get instant revenge with a sweep of their own here, going up 2-0 with two convincing map wins.

It was then that Dallas turned on their championship form once again and won the next three games to complete maybe the strongest reverse sweep we’ve seen this campaign. With the victory, they maintained their perfect record in Home Series opening matches (8-0).

As for Florida, it’s now back-to-back losses for the three-time champions, who have lost three out of their last four after winning an incredible nine straight before that. They’ll look to avoid elimination when they face Minnesota ROKKR on Saturday.

Looking ahead to Day 2 of CDL Toronto

Now that Day 1 is in the books, everyone’s attention turns to Saturday’s matches, which will see the field of eight teams cut down to four before the tournament transitions to Championship Sunday.

In Group A, Chicago Huntsmen will be taking on Toronto Ultra for a spot in the semifinals, with the loser dropping down to face whoever wins the Seattle Surge vs OpTic Gaming LA knockout match.

As for Group B, a powerhouse matchup between Atlanta FaZe and Dallas Empire will decide who goes into the next round cleanly, while three-time champions Florida Mutineers will look to avoid a shock first-round exit as they take on the struggling Minnesota ROKKR. 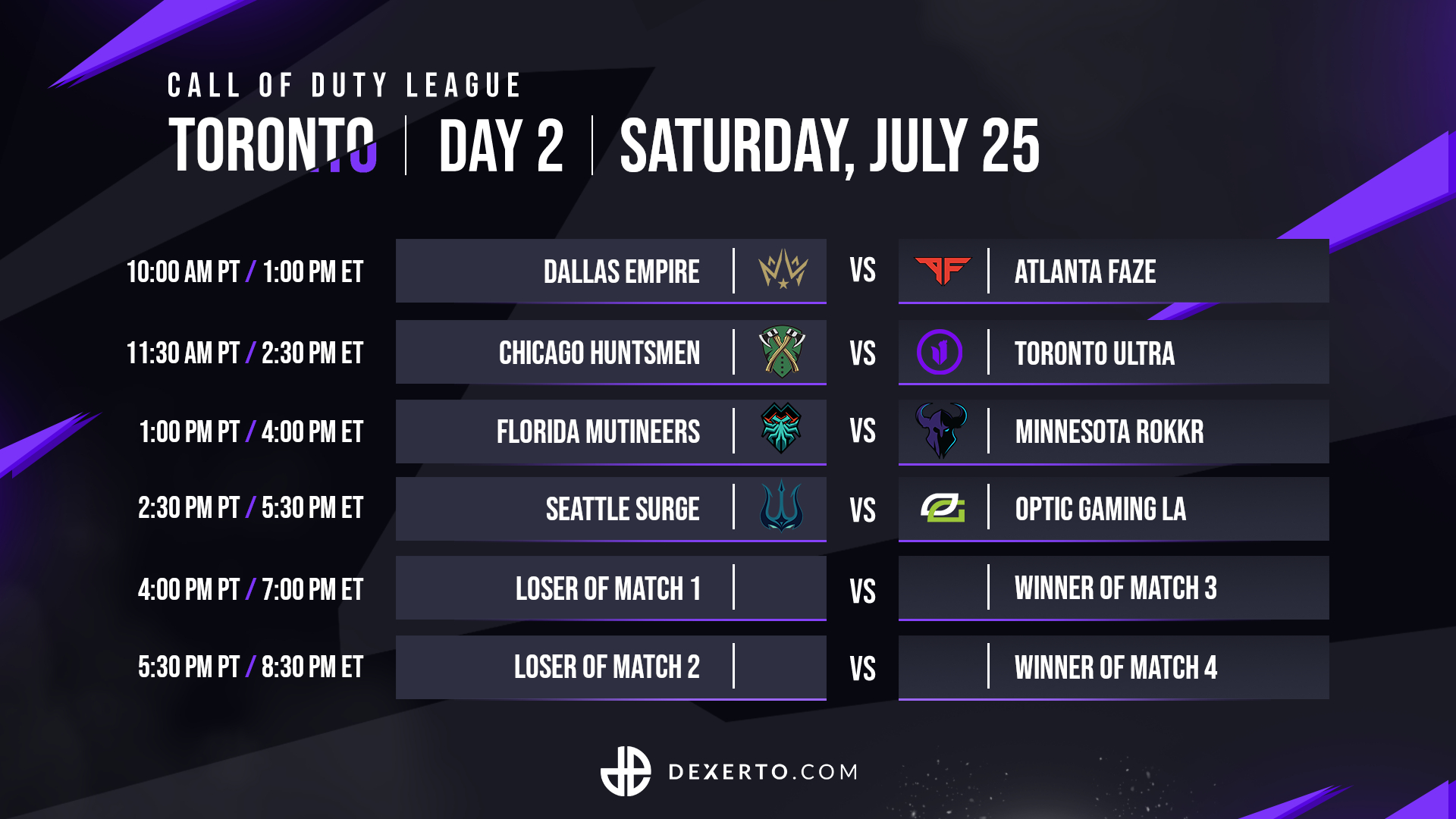 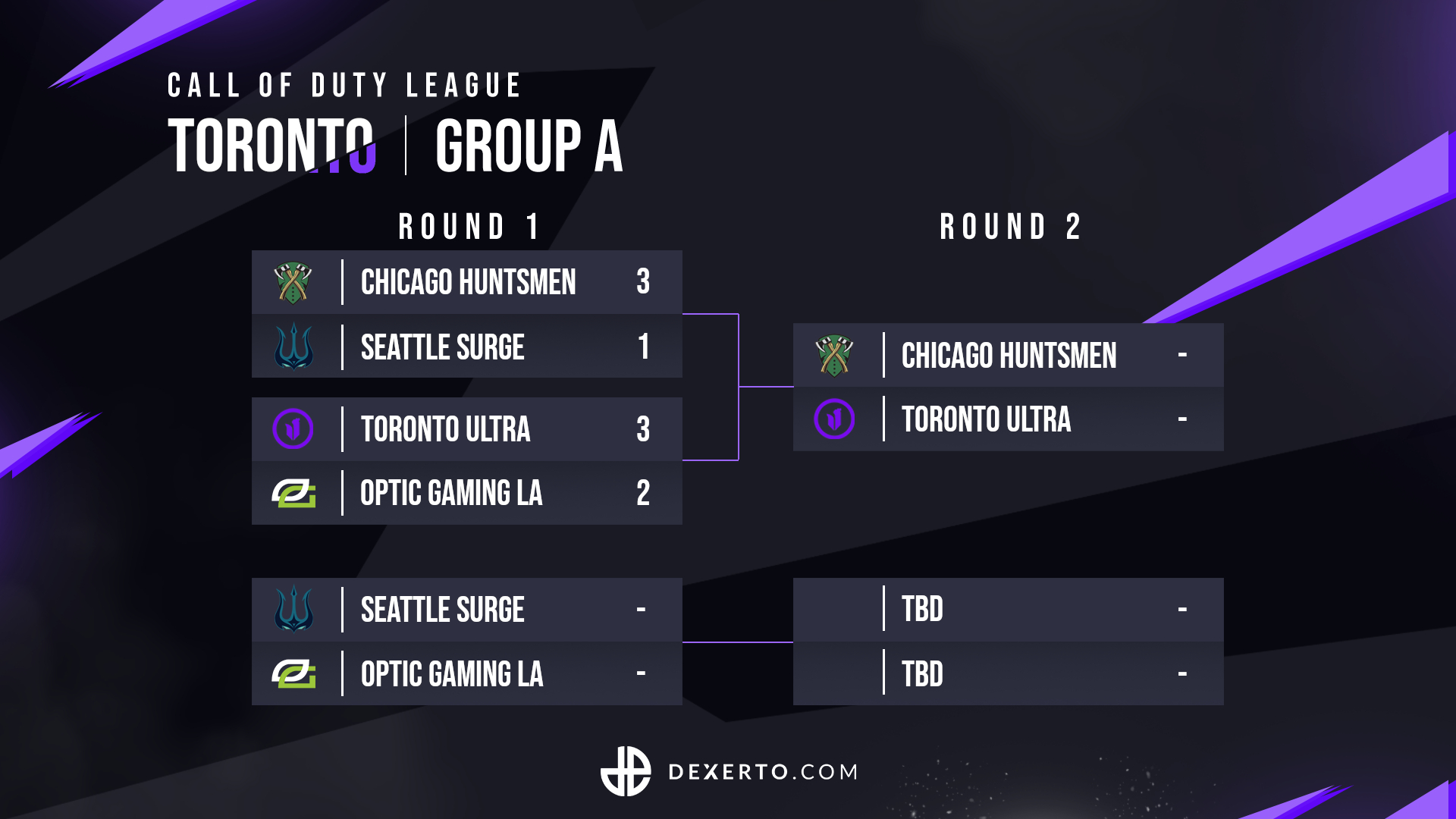 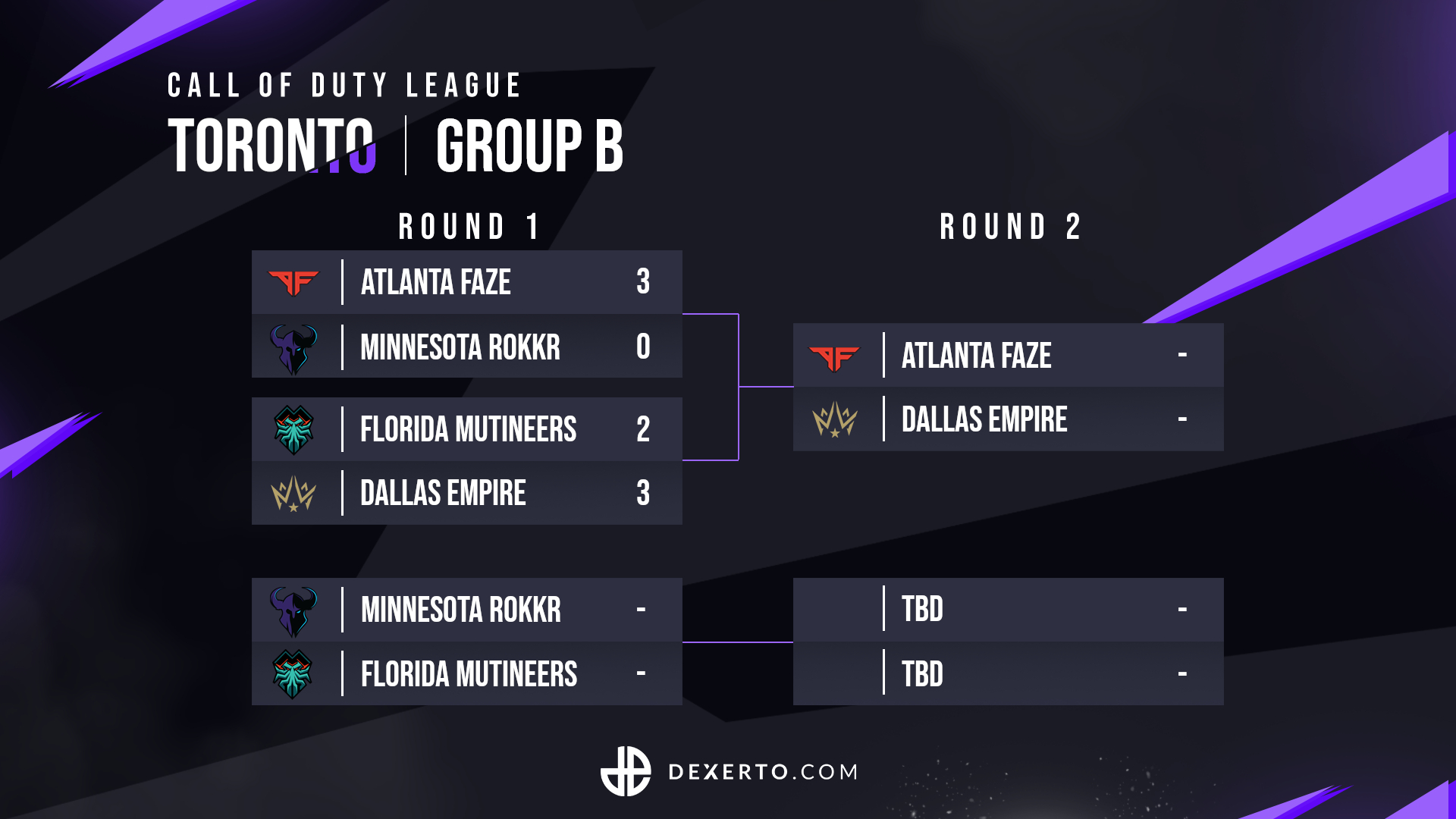 Remember, you can watch these matches live and keep up with all of the Call of Duty League action via our CDL Toronto Home Series hub, which includes streams, updated scores, brackets, and more.