With Team Rocket expected to up their efforts in causing havoc in the Pokemon Go world, a new special research quest has been leaked.

Update: The Team GO Rocket leaders and Giovanni are live in Pokemon Go now. Here’s our guide on how to find the new Team Rocket bosses, what Pokemon they use and what rewards they offer and here’s our guide for the new Looming in the Shadows special research quest.

The new quest is called “Looming in the Shadows” which is presumably some sort of reference to Shadow Pokemon. There will be six stages to the research which will finish with the chance to capture a “special” Shadow Pokemon.

Who this special Shadow Pokemon ends up being, however, remains to be seen. Lugia would be an exciting choice but given it wasn’t on the list of previously leaked Shadow Pokemon this may be unrealistic. 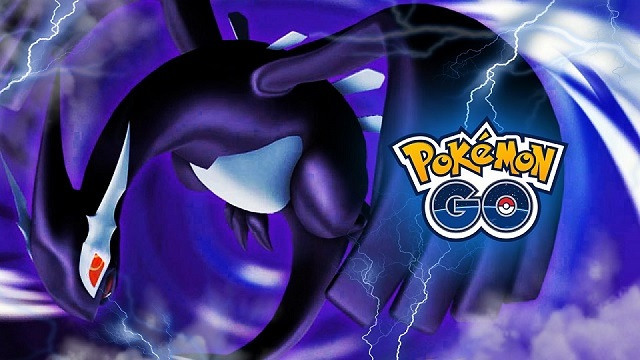 If it is not Lugia, the legendary Kanto bird trio — Articuno, Moltres, and Zapdos — are expected to be involved as they have been found in the game’s code. Mewtwo could be the ‘boss’ Shadow Pokemon from Giovanni, also.

What’s in the special research quest?

Chrales has revealed the quest text for each stage of Looming in the Shadows as well as the research tasks. However, it isn’t clear which stage these tasks will fall in. Nevertheless, here is the list of them in their entirety (rewards have not been listed):

Looming in the Shadows research tasks 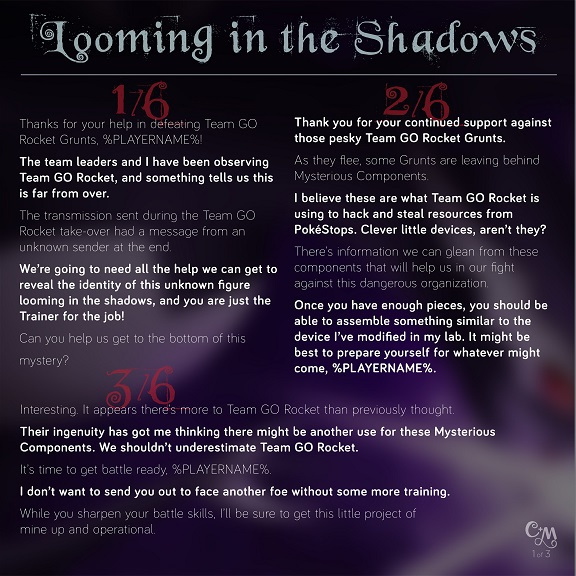 The text between each stage of the special research quest is as follows:

1/6 Looming in the Shadows

Thanks for your help in defeating Team GO Rocket Grunts, %PLAYERNAME%.

The team leaders and I have been observing Team GO Rocket, and something tells us this is far from over.

The transmission sent during the Team GO Rocket take-over had a message from an unknown sender at the end.

We’re going to need all the help we can get to reveal the identity of this unknown figure looming in the shadows, and you are just the Trainer for the job! The Team Rocket Pokemon Go hype is back in full flow as Niantic have been teasing the next stage in the villainous team’s attempted takeover.

Can you help us get to the bottom of this mystery?

2/6 Looming in the Shadows

Thank you for your continued support against those pesky Team GO Rocket Grunts.

As they flee, some Grunts are leaving behind Mysterious Components.

I believe these are what Team GO Rocket is using to hack and steal resources from PokeStops. Clever little devices, aren’t they?

There’s information we can glean from these components that will help us in our fight against this dangerous organization.

Once you have enough pieces, you should be able to assemble something similar to the device I’ve modified in my lab. It might be best to prepare yourself for whatever might come, %PLAYERNAME%.

3/6 Looming in the Shadows

Their ingenuity has got me thinking there might be another use for these Mysterious Components. We shouldn’t underestimate Team GO Rocket.

I don’t want to send you out to face another foe without some more training.

While you sharpen your battle skills, I’ll be sure to get this little project of mine up and operational. 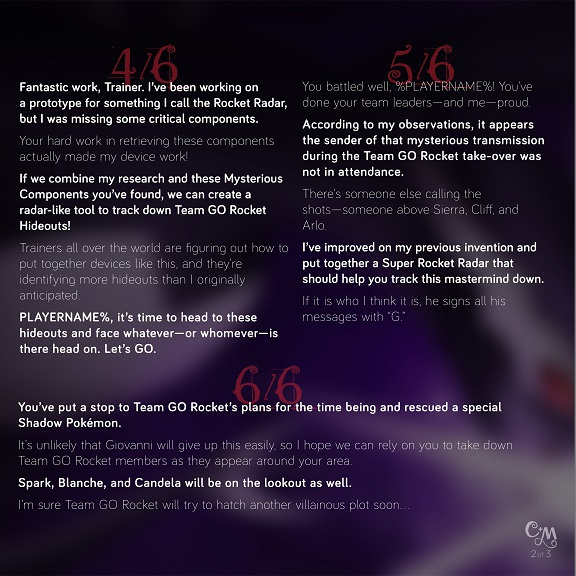 4/6 Looming in the Shadows

Fantastic work, Trainer. I’ve been working on a prototype for something I call the Rocket Radar, but I was missing some critical components.

Your hard work in retrieving these components actually made my device work.

If we combine my research and these Mysterious Components you’ve found, we can create a radar-like tool to track down Team GO Rocket Hideouts!

Trainers all over the world are figuring out now to put together devices like this, and they’re identifying more hideouts than I originally anticipated.

PLAYERNAME%, it’s time to head to these hideouts and face whatever—or whomever—is there head on. Let’s GO.

5/6 Looming in the Shadows

According to my observations, it appears the sender of that mysterious transmission during the Team GO Rocket take-over was not in attendance.

There’s someone else calling the shots—someone above Sierra, Cliff, and Arlo.

I’ve improved on my previous invention and put together a Super Rocket Radar that should help you track this mastermind down.

If it is who I think it is, he signs all his messages with “G”.

6/6 Looming in the Shadows

You’ve put a stop to Team GO Rocket’s plans for the time being and rescued a special Shadow Pokemon.

It’s unlikely that Giovanni will give up this easily, so I hope we can rely on you to take down Team GO Rocket members as they appear around your area.

Spark, Blanche, and Candela will be on the lookout as well.

It’s unclear when this special research quest and new Team Rocket bosses will be in Pokemon Go but given they have been teasing their arrival since September, we can expect them soon.