After weeks of hints and teases, Team Rocket have finally invaded Pokemon Go – the evil team have overtaken PokeStops and brought shadow Pokemon with them which you will need to purify.

How to find Team Rocket in Pokemon Go

On July 22, trainers across the world were reporting PokeStops being overtaken. However, Team Rocket were removed from Pokemon Go on July 24. The reason for this still isn’t known but players speculate it was either because of a bug or part of the Team Rocket storyline.

Regardless, they have now returned to Pokemon Go and it looks like they mean business. PokeStops have once again been targeted which are highlighted by being slightly greyed out, or discolored, and the cube above it moving in a strange fashion. Once you get closer to it an “R” will also appear above the cube.

Upon spinning the PokeStop, after a warning from your respective team leader, a Grunt will challenge you to a battle. These are known as Team Go Rocket Grunts.

Reports of these discolored PokéStops are starting to reach critical mass. @Pokemon Do you have any idea who these people could be?? pic.twitter.com/RaJWFUiioS

How to defeat Grunts?

If you choose to engage in battle, because why wouldn’t you, you will face off against the Grunt in a similar format to how battles with team leaders work. The Grunt will have three Pokemon of a similar type and although each of them are relatively low CP, while easy to defeat for most, they still battle harder than their stats suggest.

For example a 2,426 Salamence only just beat two Shadow Bulbasaurs and a Shadow Ivysaur. Catching them isn’t as easy as normal Pokemon either – we’d recommend using a berry and making sure you use a curve throw.

Once you win, the Team Go Rocket member will leave with their tail between the leagues, leaving one of their Shadow Pokemon behind. You will then have the chance to catch it, in an encounter that resembles a raid battle.

This means you will have a limited number of Premier Balls to catch it. You get two Premier Balls for defeating the Grunt and a further one for each Pokemon you have remaining – which will likely most result in five in total. There are also additional balls available for being a “hero” or “purifier” – these are new badges.

From there your team leader will pop up, in our case it is Team Mystic’s Blanche, who says: “If my analysis is correct, we can help this Pokemon through a process called purification. This will enable it to harness strength. Shall we give it a try?” 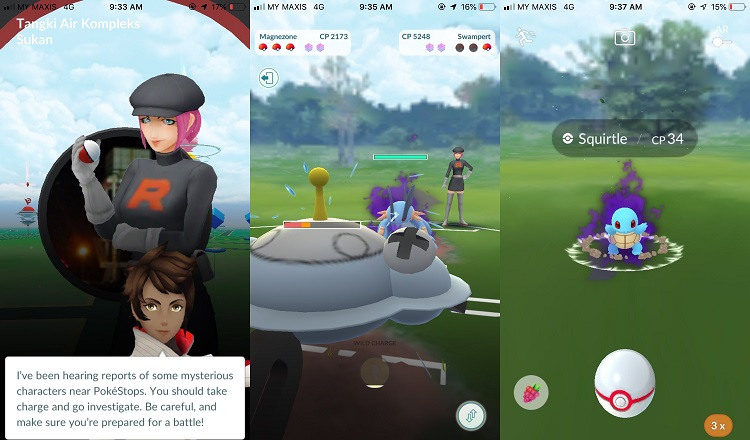 One the caught Pokemon screen, in addition to Power Up and Evolve you will now have an option to Purify your new Pokemon. This seems to cost 2,000 stardust and two candy. Once you click it the Pokemon Go interface will come up with the following message before you confirm the purification process: “Do you want to purify [name of Pokemon]? It will gain a significant amount of CP, cost less to power up, and learn the exclusive Charged Attack Return!”

That is essentially the process of encountering Team Go Rocket in Pokemon Go but here are some answers to more frequently asked questions.

Full list of all Shadow Pokemon in Pokemon Go

As of July 23, there have only been reports of Bulbasaur, Charmander, Squirtle, Rattata and Zubat as Shadow Pokemon. However, renowned Pokemon Go dataminer Chrales, has previously revealed the following Pokemon have been found in the Pokemon Go code to have shadow variants. Bold indicates Pokemon that have been confirmed in-game or by Niantic to be added.

Ralts has been added as part of the August Community Day but will not learn its exclusive move unless you purify it before the event ends.

What level are purified Pokemon?

Anecdotal reports indicate that all Shadow Pokemon when purified are Level 25.

What’s the benefit of purifying a Pokemon?

Purifying a Shadow Pokemon will immediately take them to Level 25. This can see their CP and HP increase significantly from their shadow form.

On top of that it will add two IV to each of their attack, defense and stamina (to a maximum of 15). They will also receive a 10% discount on stardust and candy when you power them up.

What’s the benefit of purifying a Pokemon?

Purifying a Shadow Pokemon will immediately take them to Level 25. This can see their CP and HP increase significantly from their shadow form.

On top of that it will add two IV to each of their attack, defense and stamina (to a maximum of 15). They will also receive a 10% discount on stardust and candy when you power them up.

What are the Hero and Purifier badges?

There are three badges for each of Hero and Purifier. Hero badges are distributed when you defeat 10, 100 and 1,000 Team Go Rocket Grunts. Purifier badges are similar whereby they are earned when purifying 5, 50 and 500 Shadow Pokemon.

Presumably, as an example, this means if you have defeated 101 Grunts and purified 30 Pokemon, then you will get a bonus three Premier Balls.

Are there lucky Shadow Pokemon?

Reports indicate that there are indeed lucky Shadow Pokemon. Moreover, when purified they will likely end up as a perfect IV Pokemon.

Are there shiny Shadow Pokemon?

While reports of shiny Shadow Pokemon are few and far between, meaning at this stage they should be taken with a grain of salt, Gamepress are reporting that Shadow Pokemon can be shiny.

How powerful is the Charged Attack, Return?

According to Gamepress, the normal-type move provides 35 base damage and 50.00 damage per second. It takes three bars of charge energy before you can use it and is considered a move well worth having.

It is worth noting evolved purified Pokemon will keep the move. Shadow Pokemon have the move “Frustration” instead.

How long do Team Rocket stay on PokeStops?

There is no specific team limit for Team Rocket being on a PokeStop. It appears to work similarly to raid battles whereby after a given amount of time the PokeStop will go back to normal. The difference here is you don’t know when that is.