Erobb rages after zombies kill him in Hardcore Minecraft

Twitch streamer Eric ‘Erobb’ Robbins wasn’t too thrilled after being killed, and losing his world in Hardcore Minecraft.

Minecraft was one of the most-viewed games during 2019 on YouTube, but it’s popular on Twitch as well, and Erobb, like a lot of other streamers during 2019, has found his way back to the game.

Hardcore is a variant of Minecraft Survival, where the world is locked to hard difficulty and players aren’t able to respawn once they die.

A lack of any respawns has contributed to the significant number of streamers and players who have raged and/or freaked out when they meet their untimely end in Hardcore mode.

After taking out a zombie in his world, Erobb makes a questionable tactical decision by dropping into a crevice with only one way out to kill a skeleton.

With the skeleton down Erobb turns to face the wave of zombies now blocking the only exit to his spot, despite the streamer’s best efforts he wasn’t able to hold out.

“Haha, now you’re gonna die,” his friend laughed and told him as the wave of undead consumed the streamer.

Once it was all over there was nothing left for Erobb to do but slam his desk in frustration and contemplate whether to start all over again.

Instead of continuing on with the Minecraft grind, Erobb decided to switch gears and play the Halo: Master Chief Collection – a game that definitely does let you respawn. 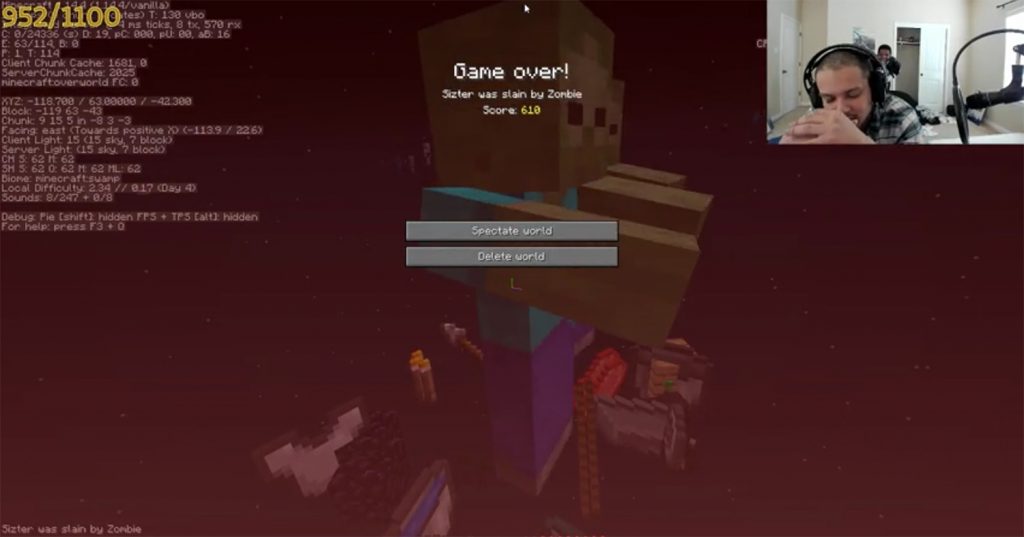 Erobb was not thrilled about his end in Minecraft Hardcore.

As we said earlier, according to the YouTube Rewind 2019 video itself, Minecraft in total cracked 100 billion views for the year on the site. Fortnite and GTA 5 trailed it with 60.9 billion views and 36.9 billion, respectively.