When Do the Fortnite Challenges Go Live for Week 9 of Season 5? - Dexerto
Fortnite

When Do the Fortnite Challenges Go Live for Week 9 of Season 5?

Fortnite Battle Royale players that are eagerly awaiting the release of the Week 9, Season 5, challenges will have to wait a little bit longer than normal.

Challenges routinely go live on a Thursday, meaning that the Week 9 ones would have been available on September 6, but a “critical controller issue” has gotten in the way of standard procedure.

Following an announcement that this controller issue had forced them to move the release of the High Stakes event, and the the V5.40 patch, to September 6, Epic Games also confirmed that the challenges would be delayed by 24 hours and go live on Friday, September 7. 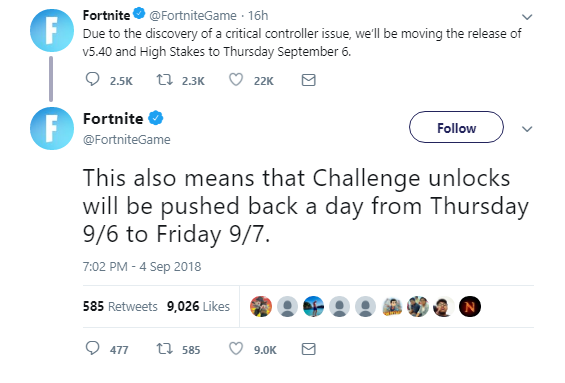 Luckily, the High Stakes event comes with its own set of challenges, and the V5.40 patch is also expected to include the introduction of the all-new “Grappler”, so you’ll still have plenty of things to keep you busy once the update goes live.

Week 9 is the penultimate week in Season 5, so time is running out if you want to earn all of the items and cosmetics associated with the Season 5 Battle Pass before Season 6 begins.

The weekly challenges tend to feature four Battle Pass exclusive tasks and three that are free for anybody to complete. Once you complete all seven, you’ll also unlock a new loading screen with a hint about a bonus challenge, like finding the hidden Banner in Week 8.