The Star Wars x Fortnite collaboration has kicked off in the popular battle royale title. You can get the Imperial Stormtrooper outfit skin for free thanks to the newly released Jedi: Fallen Order and the Epic Games store.

Fans of both Star Wars and Fortnite got a pleasant surprise late on November 14 when Epic Games launched a previously-unannounced collaboration in-game.

The collab featured an Imperial Stormtrooper outfit skin sold as a purchasable cosmetic item in the game’s Item Shop, as well as the addition of a Star Destroyer ship in the map’s sky.

This may be part of their promotion of the new Star Wars single-player game called Jedi: Fallen Order, which dropped on November 15, purchasable from the Epic Games store.

The Imperial army has arrived.

The Imperial Stormtrooper is scouting the Island. Grab him in the Item Shop now! pic.twitter.com/SKhZJ4Orcz

There are two ways to obtain the Stormtrooper skin – you can either purchase it from the Item Shop for 1,500 V-Bucks, or you can get it for free if you’re interested in buying Fallen Order.

Because the game is available in their very own store, Epic Games are giving the outfit skin for free to anyone who purchases any version of Fallen Order directly from them.

Those interested in taking advantage of this deal don’t have to rush on making their decision either, as Epic are making it available until November 30, 2020. 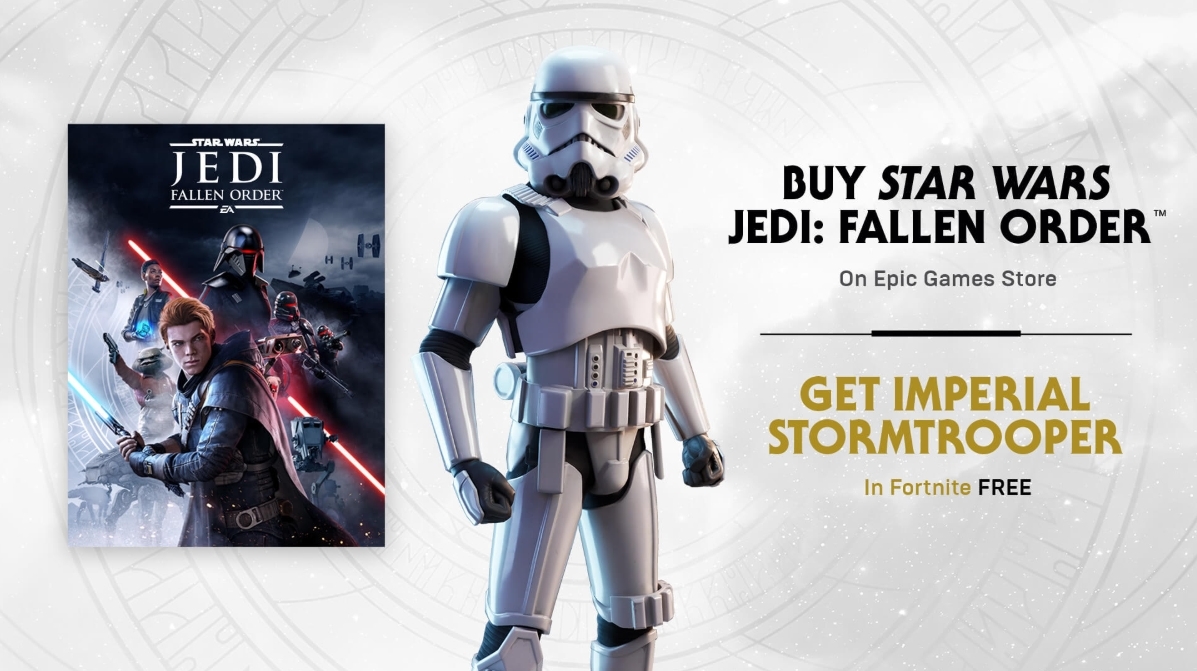 You can get the Imperial Stormtrooper outfit skin for free in Fortnite if you purchase Star Wars Jedi: Fallen Order from the Epic Games store.

If you’ve already purchased the game from another website or retailer, then you should look to get a refund on it and instead buy it from Epic and get an awesome cosmetic item to go along with it.

If you end up buying the Imperial Stormtrooper from the Item Shop and then later decide to purchase Fallen Order from Epic’s store, they will refund the 1,500 V-Bucks that you spent.

However, if at any point you get the game refunded, the outfit skin will be removed from your Fortnite inventory, along with anything else you may have gotten through this promotion.

A Star Destroyer ship has appeared in the sky #Fortnite pic.twitter.com/4ozPFYzaDN

As of now, it’s unclear if there will be anything else that this collaboration will introduce in terms of in-game Fortnite content, besides this Imperial Stormtrooper skin.

Epic have confirmed that the outfit will be “available for purchase from time to time” in the Item Shop, but there are no indications of them planning to add other themed cosmetic items, at least nothing concrete, yet.

With an Imperial Star Destroyer visible on the map’s horizon, many players think there are more Star Wars collaborations in store. The Rise of Skywalker, the ninth film in Star Wars’ Skywalker Saga, is set for release in December. A marketing campaign similar to Avengers: Endgame’s, which saw players able to use the weaponry from the movie and fight Thanos, could be on the way.

Other collaborations that Epic have done include the campaign for John Wick Chapter 3: Parabellum, so to see Fortnite continue this tradition would not be far outside the realm of possibility.