Epic Games, developers behind Fortnite: Chapter 2, have sent messages to a number of Fortnite leakers, asking for discretion ahead of the heavily anticipated Star Wars crossover event.

Fortnite is well known for its jaw-dropping crossovers with some of popular culture’s biggest films and games, including Avengers: Endgame and Borderlands 3.

December 14 will see a collaboration with Star Wars, ahead of the release of the hugely anticipated Star Wars: The Rise of Skywalker on December 19. Epic Games themselves have specifically requested that numerous leakers do not reveal any details about the event. 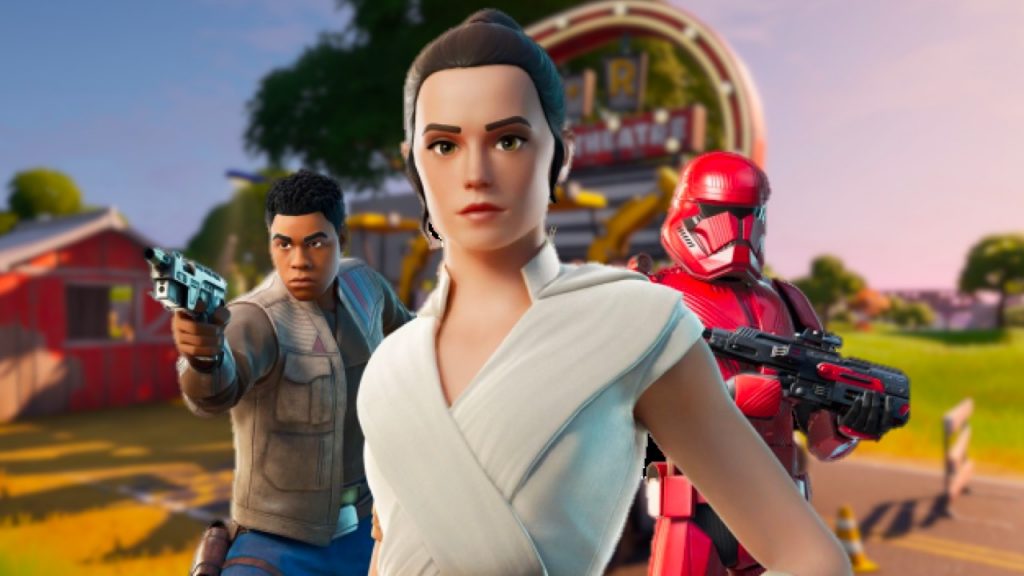 Fans are not entirely sure what will feature in the Star Wars-Fortnite crossover, but Epic have confirmed that an exclusive scene from the upcoming Star Wars film will premier in Risky Reels.

While a number of in-game events are leaked ahead of time, including the launch of Fortnite: Chapter 2 back in October, Epic are clearly keen to avoid the recurrence of such spoilers.

In a message sent to numerous Fortnite leakers, Epic request that they respect the “enormous amount of hard work” their staff have put in. The request even mentions the potential of Disney – who own Star Wars – to take legal action if an embargo is broken. 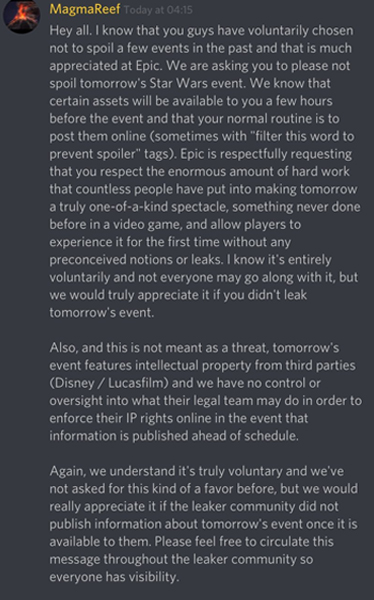 The request from Epic, in full.

A number of the most reputable Fortnite leakers, including FortTory, Lucas7yoshi and FNBRHQ have tweeted to confirm that they received the message from Epic, and will honor their request.

“I will respect their decision and I won’t leak the event,” said FortTory. “If I see people leak the event in my comments I will block them.”

Similarly, Lucas7yoshi said that: “Following a message I’ve received from Epic I’m just going to confirm that I will not be leaking any part of this event. Genuinely seems they really want it to be a surprise to people and I’ll respect that.”

I received a message from Epic Games where they request, not just to me but to every other leaker, not to leak the event.

I will respect their decision and I wont leak the event.

If I see people leak the event in my comments I will block them.

But considering that and the DM, it's probably just best to respect their wishes.

Star Wars: The Rise of Skywalker sees the recent trilogy come to a conclusion, and is one of the most anticipated films of recent years. A Fortnite crossover will likely compound fan excitement ahead of its December 19 release.

Given the efforts of Epic Games to maintain secrecy, it sounds like they have a plethora of new content for players to dive into, with much remaining up in the air about how the crossover will be handled.