An exclusive scene from the upcoming film Star Wars: Rise of Skywalker is set to be shown in Fortnite and we’ve got all of the details on how to watch it, and the TIE Whisper Glider that will be offered as a free reward.

Epic Games have partnered up with Disney to celebrate the upcoming release of Star Wars: Rise of Skywalker with themed in-game Fortnite content.

They’ve already released outfit skins based on three major characters from the film, and up next will be an exclusive scene from the movie played within the battle royale game itself.

Epic have advertised that this event will feature J.J. Abrams, so fans can expect the film’s director to provide an introduction, and perhaps even commentary for this exclusive scene.

When does the Star Wars x Fortnite event start?

In all likelihood, Epic have set up a Limited Time Mode specifically for this showing, and players will be given 30 minutes to queue in before the scene is played.

For your convenience, we will also include direct streams of the event here on this page closer to the time when the event is about to kick off.

You won’t want to miss this ? pic.twitter.com/xRD0ynjaJT

Where to watch the Star Wars x Fortnite event?

The scene will be played on the big screen located in Risky Reels, a drive-in movie theater located on the Fortnite map as a landmark to its predecessor from Chapter 1.

However, it’s unlikely that Epic will actually make players gather at the location on their own. Instead, the special LTM they put in will probably be restricted to the boundaries of Risky and restrict players from leaving.

Furthermore, it’s almost certain that the LTM will be designed in such a way that either prevents players from dealing damage to each other or will have respawning enabled so that anyone who gets eliminated can just load back in right away. 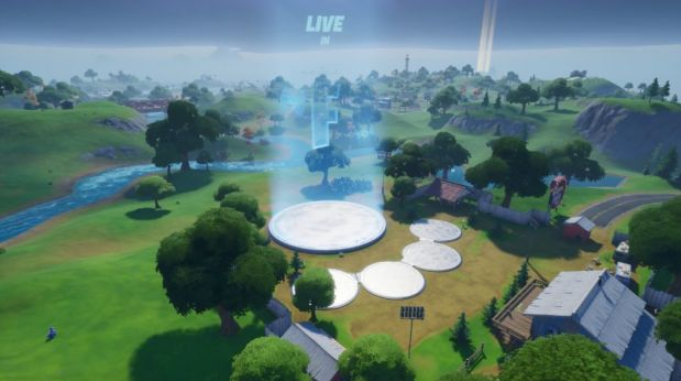 The stage is set for the exclusive Star Wars: Rise of Skywalker scene in Fortnite.

How to get free TIE Whisper Glider during Star Wars x Fortnite event?

Not only will this event feature an exclusive scene from Rise of Skywalker, Epic will also be handing out free gliders based on the TIE Whisper vehicle from the film.

Getting one will not be difficult; all you have to do is simply tune into the showing in-game and one will be added to your inventory.

Star Wars: Rise of Skywalker will hit theaters on December 20 in the United States. For full details about this collaboration, make sure to check out our Fortnite x Star Wars info hub.