While the Team of the Season So Far continues to slowly roll out in FIFA 20 Ultimate Team, giving each major league’s top players a huge ratings boost, EA SPORTS are also offering non-TOTSSF SBCs for players to complete.

The TOTS So Far SBCs tend to be fairly costly ventures, which makes sense given the fact that you’re getting some of the best cards in the game from them.

To make sure that everyone has a chance at completing SBCs and earning decent rewards, EA SPORTS have released the 81+ Double Upgrade SBC, gifting players the opportunity to earn two 81+ rated Rare Gold players.

Ligue 1’s Team of the Season So Far features two 98-rated players in Neymar and Mbappe.

SBCs throughout the TOTS So Far period have been many and varied. For each TOTS that arrives in the game, a number of SBCs come with it, including several specific players as well as “upgrade” challenges, such as the recent Ligue 1 Upgrade SBC which allows players the opportunity to pick up the likes of Neymar or Mbappe for below market price.

The issue is that these are often expensive and sometimes the reward isn’t worth it, so that’s where the 81+ Double Upgrade steps in, giving you more chance at getting a decent player at a much lower cost.

How to complete 81+ Double Upgrade SBC in FIFA 20

With this SBC, you can exchange a squad for a pack with Two Rare Gold Players rated 81 or higher.

Here are the requirements needed to complete the challenge, and it doesn’t look too strenuous:

As you can tell, all you really need is 11 Gold players – the chemistry is easy to achieve and this can easily be done on a tight budget.

According to the database of completed challenges on FUTBIN, this really is a cheap SBC to complete, clocking in at around 10,000 coins.

Obviously, when these SBCs arrive there is always some fluctuation in card prices, but the below team has come out as the cheapest solution to the challenge, at 9,850 coins on PS4 and 10,750 on Xbox One at the time of writing.

This is the cheapest solution at the time of writing.

Evidently, this isn’t the one squad that you have to use, and if you’ve got any cards in your club that might work, or an idea of who you can fit in here for cheaper, you might be on to a winner at an even lower cost.

It’s worth noting that as these are only 81+ upgrades, the chances of getting a seriously good card isn’t all that high, and is even lower if you’re hoping to get a TOTSSF card.

Regardless, for 10,000 coins, it might just be worth trying your luck, because you never know – this could be a real money-spinner if it works out for you.

Another month passing in the world of football means another Player of the Month SBC for FIFA 21 players to complete. This time we’re focusing on Lars Stindl, Borussia Mönchengladbach’s attacking midfielder who has impressed massively over the festive period.

FIFA 21 has only been out for a few months, but we’ve already seen some truly scary POTM cards. Bruno Fernandes, for example, has seen his 87 OVR base card get multiple upgrades to the point of being a 92 OVR CAM, and one of the very best cards in the game.

However, unlike that Fernandes card, you don’t need 6 ludicrously tough squads to unlock Lars Stindl’s upgrade card. It’ll take 2 squads to unlock the Bundesliga POTM card for December, which comes in at a very respectable 86 OVR.

The German international notched up 4 goals and 1 assist in December, helping his Borussia Mönchengladbach side to seventh in the Bundesliga.

You can see the card’s stats on the image above. 67 pace and 66 defending are his lowest, with 79 physical rounding off his lack of ability as a defender.

However, his offensive stats of 86 passing, 86 dribbling, and an incredible 89 shooting, are what makes him a card worth getting if you’ve got the coins available. You’ll also notice his 4* weak foot and 4* skill moves.

A full look at his stats, thanks to FUTBIN, are available below:

The total cost for STindl, unlike some of the POTM SBCs we’ve seen previously, is remarkably cheap. Completing both squads will set players back between 45,000-50,000 coins, depending on your platform.

The first squad, which costs around 22,000 coins, must meet the following requirements:

Below is one of the cheapest solutions: 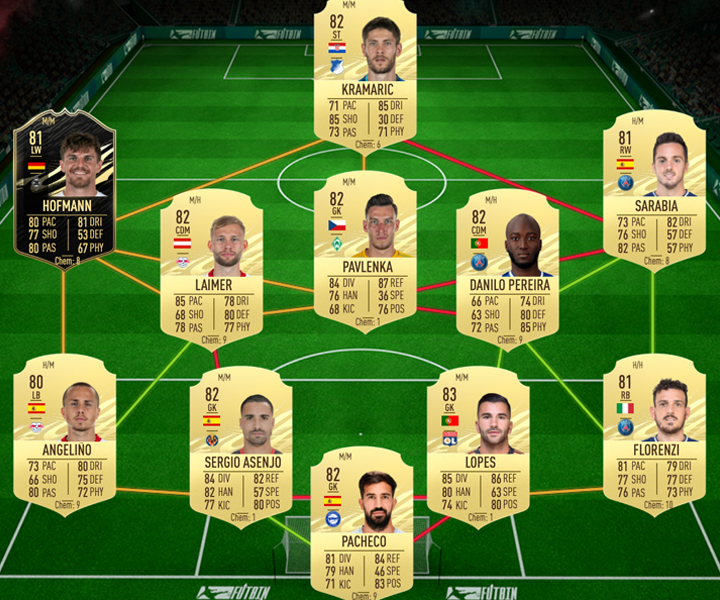 The second squad, which costs around 25,000 coins, must meet the following requirements: 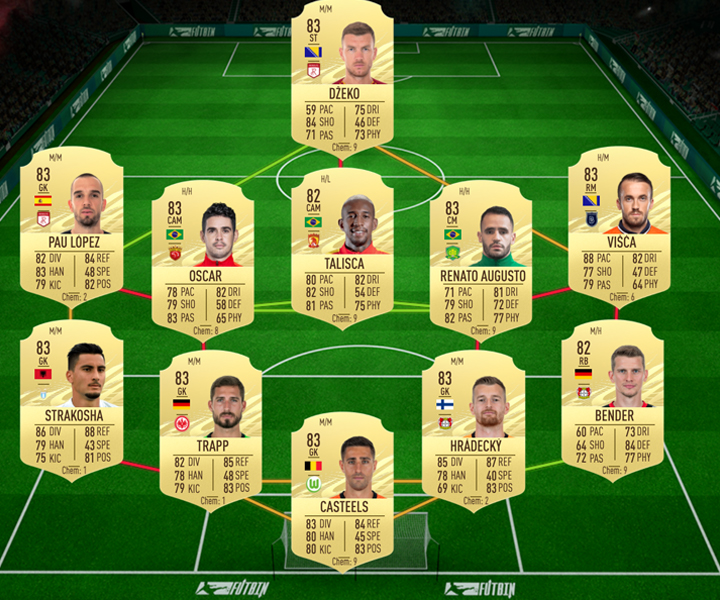 It’s that simple to get your hands on the Lars Stindl POTM card. Given how cheap it is to complete, and the attacking powerhouse you’ll get in return, we’d recommend doing this.

The card’s major drawback is its lack of pace, but surrounding him with fast players like Marco Reus and Douglas Costa seems an easy way to negate this issue. Having said that, keep in mind that he won’t be beating many defenders in a foot-race.