The 15 most brutal jokes from the ‘Roast of the Sidemen’

Olajide ‘KSI’ Olatunji and co. upload weekly content as part of ‘Sidemen Sunday’, and their video uploaded on October 13 sees the British collective receive a verbal roasting from various guests. We’ve summed up the most cold-blooded jokes from the skit.

Each member of the Sidemen has had their time in the spotlight in some way or another, from infamous diss tracks to internal feuds, the seven-man group all have a history which can be nitpicked.

Callux, Calfreezy, Jaackmaate, Lozcast, StephenTries, and TrueGeordie were among the YouTubers who all took punts at members of the Sidemen in a savage skirmish of slurs. Here are the 15 most brutal one-liners from the video, in descending order.

Laurence ‘Lozcast’ McKenna carefully tip-toed around Tobi ‘Tobijizzle’ Brown’s race: “Tobi… Tobi Brown. How could you have the whitest name in the Sidemen? Tobi… You’re like most people’s first attempt at drawing KSI.”

Callum ‘Callux’ McGinley was the first to step-up to the podium, as he poked fun at Tobi’s (or perhaps lack of) love-life: “Tobi is the only guy that I know that could pay for a prostitute and still end up in the friendzone.”

Fresh from the KSI vs. Logan Paul 2 press conference, Brian ‘True Geordie’ Davis listed a series of jokes that worked on each member of the Sidemen, before chiming in on Singh ‘Vikkstar123’ Barn one last time… “As for Vikkstar, imagine being the nerdiest member of the Sidemen. That’s like being the f**king fattest girl at Weight Watchers isn’t it? Jesus Christ!” 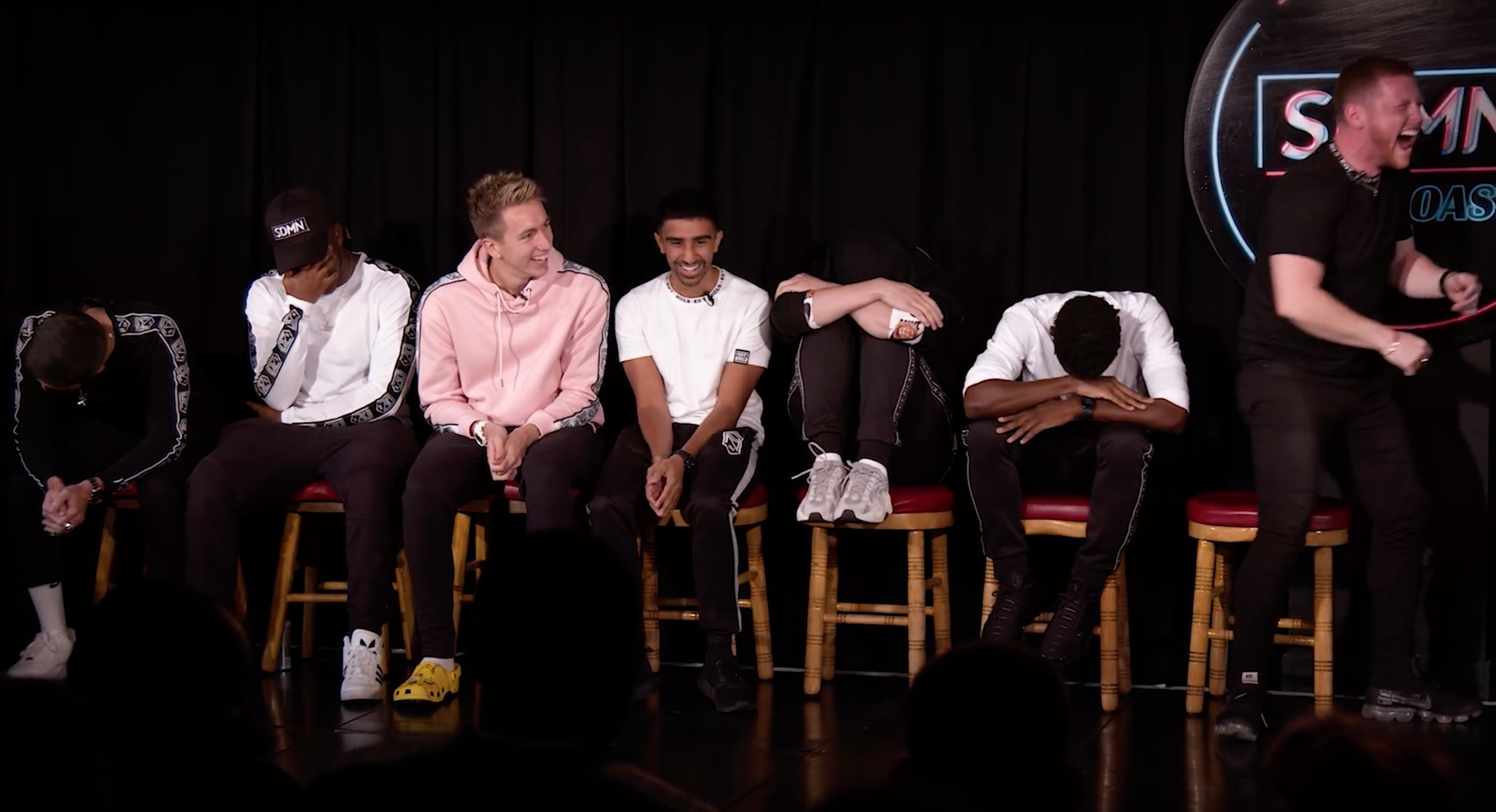 Some of the jokes hit harder than expected during the ‘Roast of the Sidemen’.
[ad name=”article3″]

12. Stephen Tries to get under Vikkstar’s skin

After a pause of laughter from his last joke, Stephen ‘Stephen Tries’ Lawson paid homage to Vikkstar’s content demographic, which seemed to go down well with the live audience: “My favorite member of the Sidemen is Vik… Or to give him his full-name, Victim. Vik really has the it factor, and by that, I mean he’s a clown that likes the taste of kids.”

11. Lawson showed no mercy with Zerkaa

Evidently not holding back, Stephen proceeded to include his grandad’s death in a pun directed at Josh ‘Zerkaa’ Bradley: “The Sidemen love hide-and-seek — maybe next time they can try and find Josh’s personality? I’m not saying Josh is dull, but I haven’t seen six people carry someone so lifeless since my Grandad’s funeral.”

Callum ‘Calfreezy’ Airey frequently collaborates with members of the Sidemen. Announcing his love for their videos, Airey let out a series of one-liners before throwing shade towards Behzinga for his lack of father figure.

“I love all of the Sidemen videos, particularly the hide-and-seek ones… I couldn’t help but notice, though, how good Ethan was — suppose he got it from his Dad.” 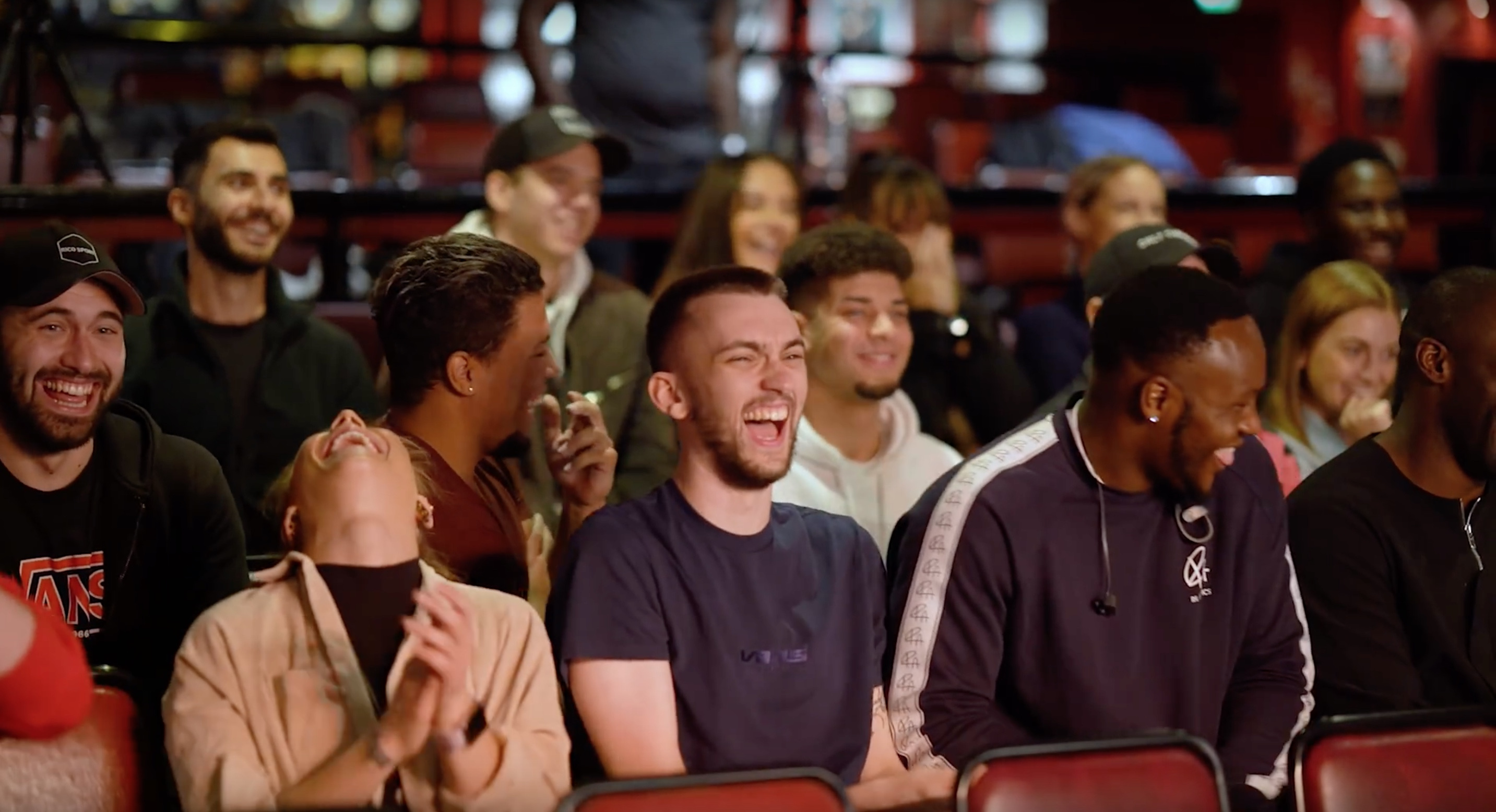 The audience were caught somewhere between shock and laughter, as the collection of witty puns displayed no remorse.
[ad name=”article4″]

Stephen Tries rolled out a series of jokes with no filter whatsoever, as he kicked things off by initially jumping on the KSI bandwagon… “Ah, KSI. Given what happened last Christmas, this might be the only roast that you’re invited to this year.”

8. The Olatunji family feud and Deji

Jack ‘JaackMaate’ Dean was also keen to exploit the family feud which transpired between the Olatunji brothers and his family: “What does Simon’s girlfriend have in common with Christmas Day at the Olatunji household? JJ has probably ruined them both… And Deji probably claims he has.”

7. JaackMaate had done his homework

Having evidently done his homework, Dean moved on to Behzinga’s social media while referencing Harry ‘W2S’ Lewis’ alleged previous involvement with cocaine: “In 2018, Ethan tweeted… ‘As of today, I’ve lost 30 kilos’ — now I don’t want to cause any shit, but have you checked Harry’s bedside table?” 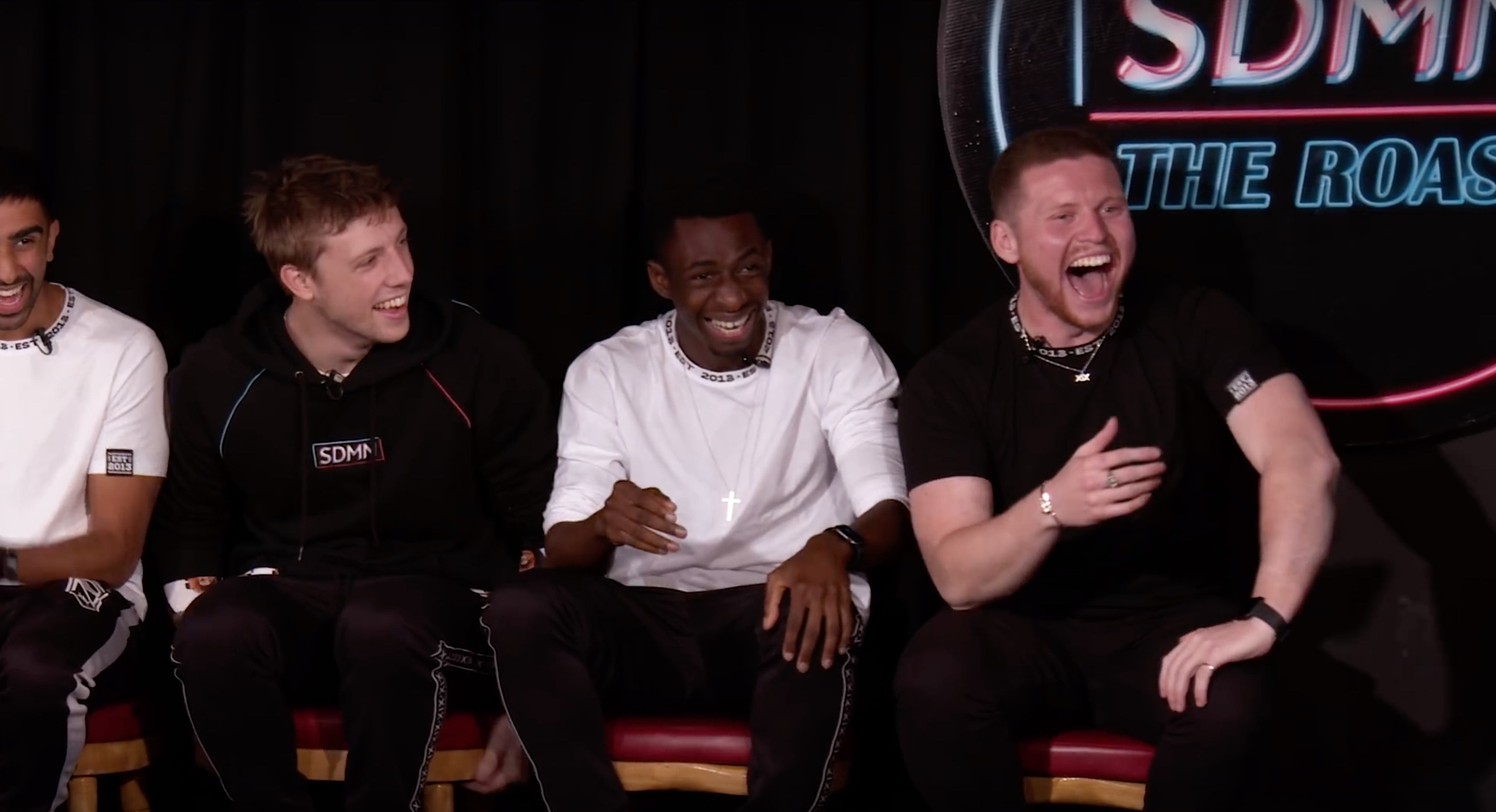 Behzinga was in stitches after some clever digs.
[ad name=”article5″]

McGinley weighing in on Ethan ‘Behzinga’ Payne’s absence of a Father figure, while simultaneously mocking his Mother’s social media presence: “Unfortunately, after seeing how f**king annoying Mummy Behz is on Twitter, I’m not surprised your Dad left you.”

McKenna began by throwing out some rib-tickling quips before turning up the heat on Vikkstar’s “boring” content: “Vikkstar was what Jeffery Epstein played to the kids on the plane to get them to sleep.”

After making his way around the houses, McGinley worked on Vikkstar’s love of EDM music with a unexpected twist: “As you guys know, Vik has tried to suck the d**k of every EDM DJ in the World… Last week, I even caught him trying to dig up Avicii.” 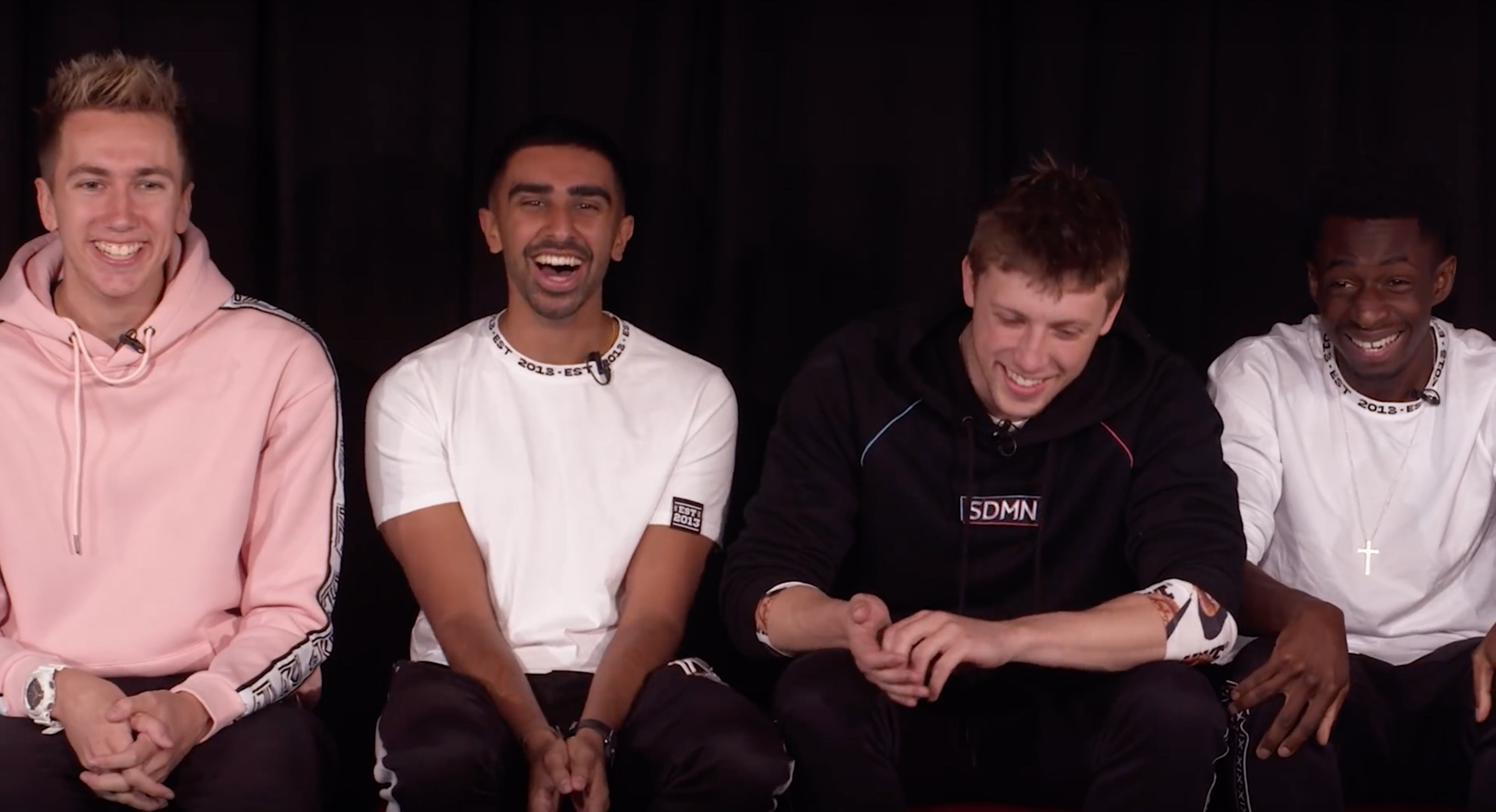 Vikkstar saw the brighter side of Callux’s pun.

3. Lawson takes a jab at KSI’s past

Lawson was quick to reference JJ’s history of abortions with his past girlfriends, in-light of the rivalry between KSI and Logan Paul… “The build-up to KSI vs. Logan has been intense. JJ hasn’t threatened to end a life with a hook since his ex-girlfriend got pregnant.”

2. JaackMaate doubled-down on W2S and Vikkstar

Dean found a shrewd transition into his next joke, by combining Harry’s history with a play on Vikkstar’s race: “I hate how people treat different members of the Sidemen… I mean if Harry pulls out a bag unexpectedly, it’s party time. Yet if Vik does it… Someone call the bomb squad!”

During the mid-section of his skit, Stephen Tries referenced WS2’s history with drugs with a savvy play-on-words in reference to British TV shows: “Harry struggles with two things: video ideas and staying sober. So I thought he could copy the Sidemen and rip-off a TV show. Why not try: Total Whiteout, Dancing on Spice… And of course, Come Down With Me.” 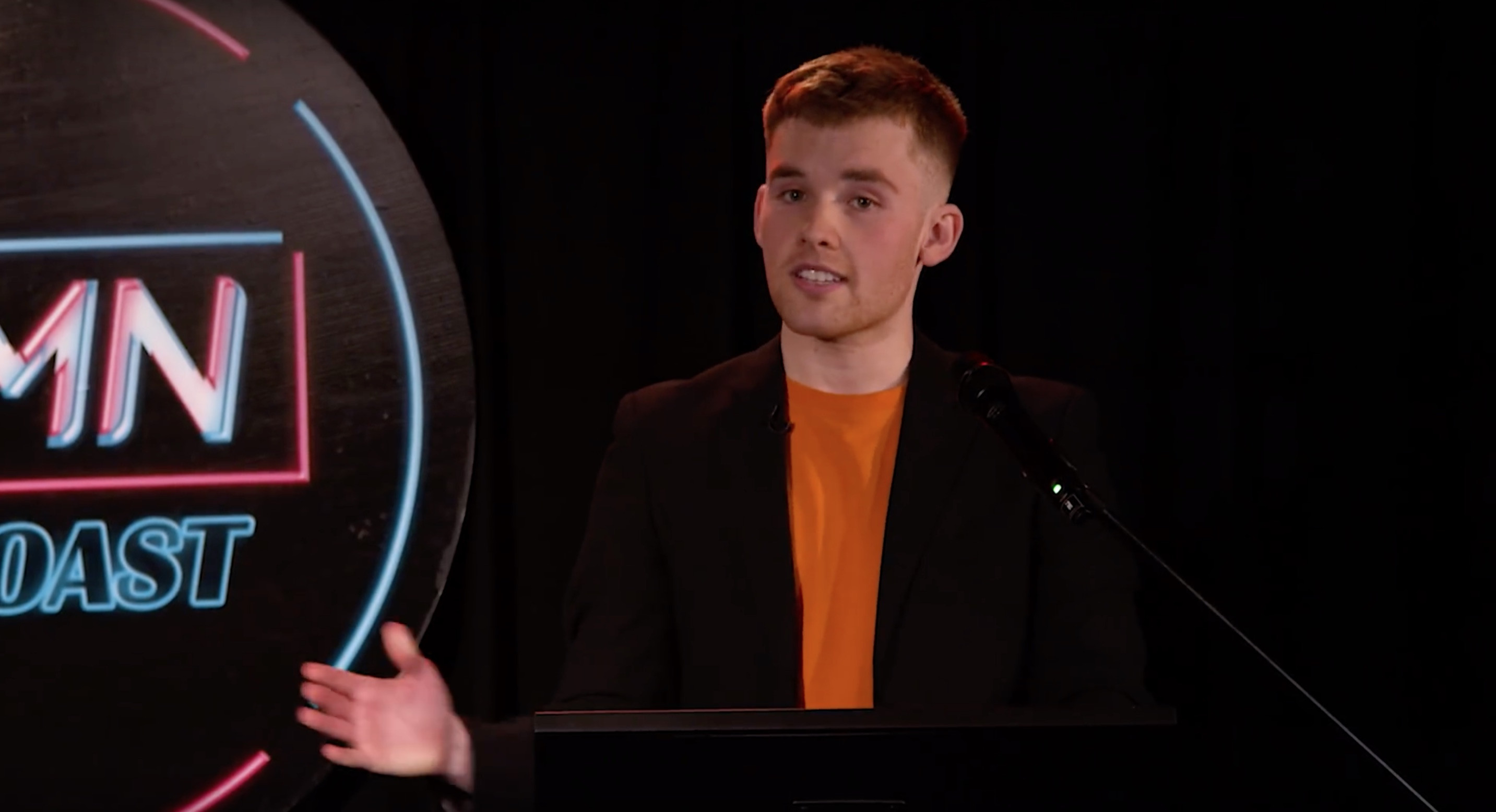 It seems that Behzinga, Vikkstar and KSI took the brunt of the verbal slews, while Simon ‘Miniminter’ Minter and Zerkaa got off somewhat lightly.

Uploaded on October, the comedic roast of the Sidemen has gained a lot of traction on YouTube, having accrued over 4 million views in less than 24 hours.