PewDiePie’s Minecraft dog Sven has a near death experience

YouTube star Felix ‘PewDiePie’ Kjellberg was left stunned after his trusty sidekick Sven almost died in a freak accident, putting the fate of his Minecraft dog in jeopardy.

There have been many unfortunate casualties during PewDiePie’s Minecraft adventures. His beloved horse Joergen has actually died before, and is now on his third version simply known as ‘Joergen #3’.

So it’s a running theme on the series to protect his dog Sven ‘at all costs’. The YouTube star even has merchandise for it. But during his August 14 episode, the recently married pet was put into serious jeopardy after an unexpected attack.

The Swedish YouTuber was just about to enter the Nether, when he heard the sound of lightning strike. Given that he still has the enchanted Trident he used to create his 96 million pig army, he decided to try using it on various enemies to see if it had any effect.

Much to his surprise, he struck a Creeper, and the lightning turned it into a ‘charged’ version. “What? What’s a blue Creeper? Whoa! It’s so cool!” he said excitedly. He soon discovered that charged enemies can drop ‘mob heads’ that are wearable.

“They make bigger explosions! Whoa he dropped a head. What!?” The Swede then blew up several Creepers, to try to get more of the item drop. He eventually wore one of the Skeleton heads. “Oh my god, Sven is gonna freak out,” he laughed. 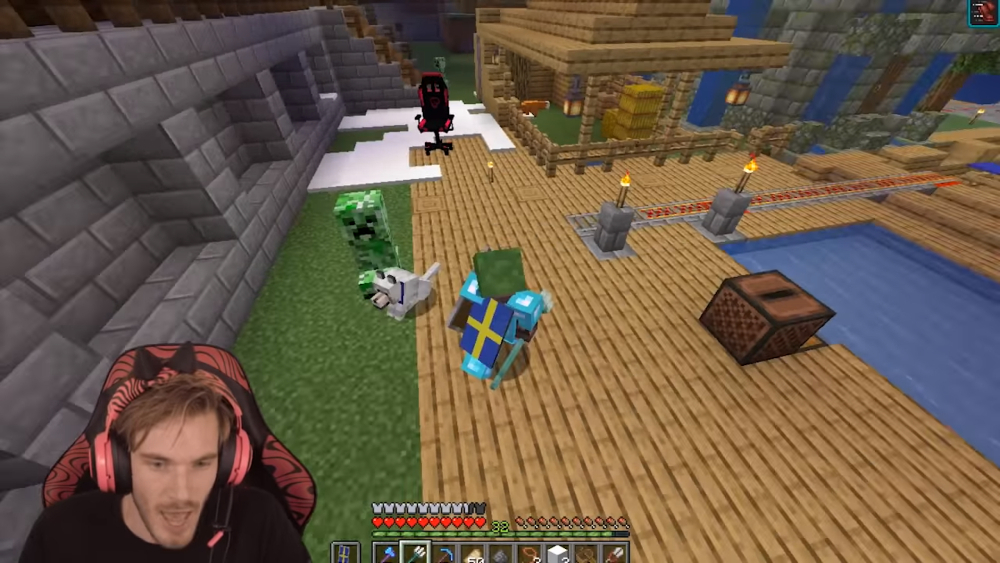 The scary moment before Sven is attacked, putting his life in danger.

Going back to his original idea of scaring Sven, the Swedish YouTuber decided to put on a Creeper head, and went straight back to his base to greet his dog to take him by surprise.

“Hey Sven!” he called out to the dog, who then looked up at him. Suddenly, seemingly out of nowhere, a Creeper approached from behind and exploded on his dog, sending him up in the air.

PewDiePie screamed. “Nooooooo! Oooooh! Eaaaat!” he begged the dog, trying to get Sven’s health back up to save his life. “Oh my god,” he yelled, completely stunned at what happened. 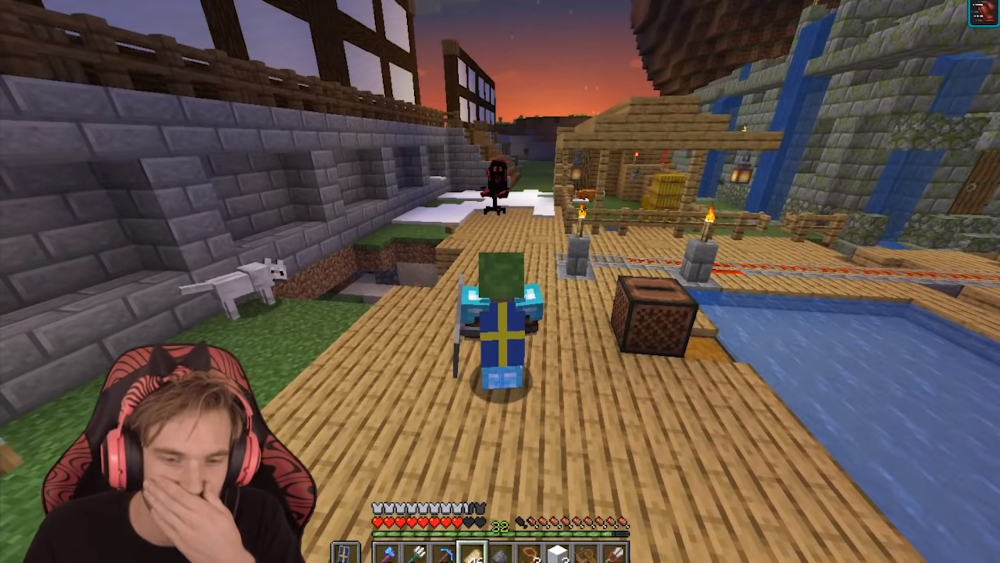 The YouTube star was genuinely shook after Sven was attacked by a Creeper.

The YouTube King looked genuinely shocked as he covered his mouth with his hand. Luckily, Sven barely survived, as the Swede was able to revive his health by feeding him food. The dog looked scared however, and retreated underground.

“No I’m sorry! Awww. No, Sven, I’m sorry! I’m sorry. It’s me, I promise!” he said emotionally, taking off the Creeper head. After it seemed Sven was out of the woods, another two Creepers showed up into his base, going straight for the pup. The YouTube star screamed “No!” and attacked them. ”I want to cry. Oh my god Sven. I thought you were gonna die. I was just trying to make a joke!”

Despite all the effort PewDiePie made to secure his base, this just goes to show how brutal the world of Minecraft can be.