Controversial YouTuber Logan Paul is challenging yet another celebrity to a fight – and this time, his lucky opponent happens to be A-list actor and Avengers star Chris Hemsworth.

Paul called out Hemsworth in an Instagram comment on February 10, underneath a picture of Hemsworth and wife Elsa at a UFC match.

While Hemsworth himself felt that he might not hold up in the octagon despite his “godlike” physique, Paul was fairly confident in his chances against the actor. 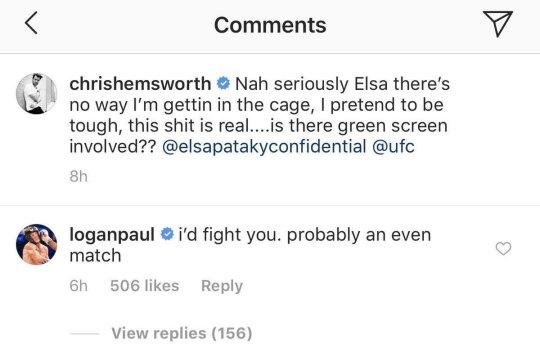 Logan Paul appeared fairly confident in his chances against Hemsworth – but the internet isn’t having any of it.
https://www.instagram.com/p/Btr9_nGj_Ly/?utm_source=ig_web_copy_link

“I’d fight you,” Paul commented. “Probably an even match.”

While Hemsworth has yet to respond to Paul’s challenge, the internet has since gone wild with the exchange, posting a plethora of hilarious memes across Twitter poking fun at the YouTuber’s confidence.

This isn’t the first time Paul has called out a potentially formidable opponent, either; he likewise challenged UFC fighter Sage Northcutt to a bout in September of 2018, following his boxing match against fellow YouTuber KSI in late August.

While Logan is set to fight KSI in a rematch later this year, his younger brother Jake Paul could be gearing up to face off against rapper Soulja Boy, after the two engaged in a few verbal spats across social media.

Since then, Soulja has confirmed that their fight will actually happen – and even placed a whopping $20 million on his chances, to boot.

Both Paul brothers have expressed a desire to fight in the UFC, following the monetary success of the KSI vs Logan Paul card in 2018. While president Dana White vehemently decried any potential involvement with the YouTubers, the two continue push for a shot in the octagon.