Dr Disrespect made headlines during E3 2019 thanks to his bathroom debacle and many viewers still haven’t forgotten about it.

Doc is one of the biggest streamers on Twitch and while he has plenty of fans, he always has a ton of people who just love to hate him in his chat on any given day.

This isn’t anything new as it seems to be the bigger you are, the more trolls you have. 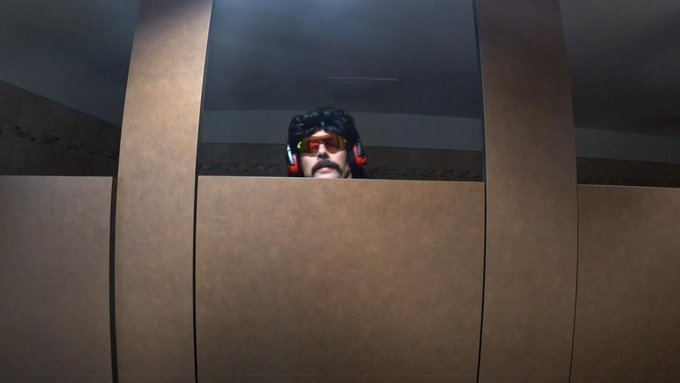 Dr Disrespect peeking his head over a bathroom door.

It also doesn’t help that the Two-Time has found himself in hot water so recently. During E3 2019, he had his first-ever IRL stream in which he made the poor decision to walk into a public bathroom and keep the stream going.

He ended up having his E3 pass revoked and he was subsequently banned from Twitch as a result of it all.

The Doc wasn’t away for long but he was memed and trolled over the incident, as expected, and that is continuing as we turn the calendar over to 2020.

As he was reading donations on his stream, Dr Disrespect came across one that once again brought the bathroom ban back up.

“There are a few maps with bathrooms in it and generally there is no loot as well as cameras,” read the donation, referring to Escape from Tarkov.

Doc immediately responded to the dono by getting into the character of the donator and using a strange voice to mimic him.

“It’s the worst thing in the world and I was so affected by it,” Doc said. “I had such a hard opinion about it and I thought he should have banned forever and ever and ever.”

Many viewers have long moved on from the incident but there will still be a dedicated audience out there that looks to ruffle up some feathers as we saw here.

For the most part, Doc has taken the criticism in stride, but there’s only so much someone can take before they snap.

We’ll just have to wait and see if people keep the meme going into the new decade.

With so many streamers making the jump to other platforms like YouTube, Mixer, and Facebook Gaming, Doc is one of the biggest names left on Amazon’s platform and he’ll be looking to capitalize on that.