Dellor banned from Twitch for breaking keyboard on stream

Dellor is a former Overwatch pro and is highly ranked in other online games such as Fortnite, PUBG, League of Legends and Apex Legends.

Concerns have been raised for the streamer after he posted a worrying TwitLonger a few hours following his ban.

In their latest ban, Twitch chose to remove dellor from the platform the exact same day he was supposed to be able to get Twitch partner subscriptions back (which are a major source of revenue for streamers) after having his partnership removed earlier in 2019.

While streaming Apex on October 1, dellor tore his keyboard apart after being downed in Skulltown.

The streamer raged about stream snipers as he literally ripped his keyboard in half before slamming down his chair.

Credit to FLiK Sixin on YouTube for the clip.

Shortly after the smash, dellor’s stream cut off, and following this, the streamer provided a Twitter update, in which he claimed that he’d been banned for “self harm”.

“Banned indefinitely for ‘self harm’ for breaking a keyboard on stream,” he wrote. “I bought these keyboards specifically because of how cheap and fragile they are. I’ve broken hundreds of them and have never even scratched myself.”

banned indefinitely for "self harm" for breaking a keyboard on stream. I bought these keyboards specifically because of how cheap and fragile they are. I've broken hundreds of them and have never even scratched myself. Here's an image of my face a few minutes after. not a scratch pic.twitter.com/lM2hgPv1D2

Dellor argued that some of the streams in which he had broken keyboards in the past had even been watched by Twitch staff – but he’d never even received a warning before being banned for the offense on October 1. 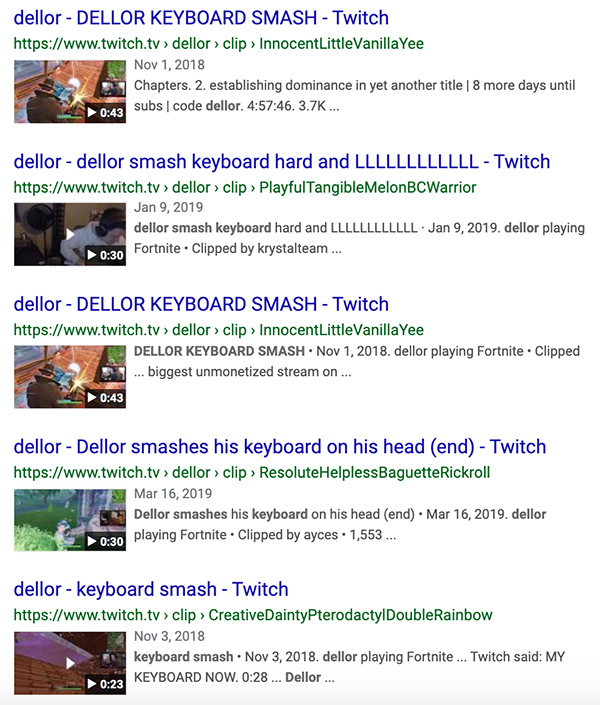 A simple Google search returns plenty of clips from dellor’s now-banned channel of his smashes.
500

In a Twitlonger posted after the incident, dellor said that the latest ban has broken him, but his contact inside of Twitch told him that there was nothing they could do.

In the post, he writes, “I love you all for what you’ve blessed me with but I don’t want to continue living in this world anymore.”

The streamer’s message has caused serious concern among the community about his wellbeing.

i am broken. i have been depressed for months. i did everything i could to change. i stayed loyal to twitch. (cont) https://t.co/ZdNJ3j0n9C

It’s not the first time dellor has run into trouble with Twitch, either – he lost his partnership earlier in 2019 after a sexist outburst.

The latest ban seems to have come out of nowhere and blindsided the streamer, who’s concerning messages on Twitter have a lot of people worried.