Destiny 2’s newest expansion, Forsaken, is releasing on September 4th. Fans can get an early taste of the add-on’s upcoming multiplayer mode through a free trial on September 1st through the PlayStation Plus September giveaways.

However, fans will be able to get a first look at the mode before the trial goes live – thanks to a special showdown.

Destiny developer Bungie has invited streamers and content creators Dr Lupo and MTashed to their studio for a showcase of Forsaken’s new multiplayer mode: Gambit Mode.

The Gambit Showdown will go live at 1 PM Pacific Time through Bungie’s Twitch channel on August 31st –  a full day before the PlayStation Plus free trial. 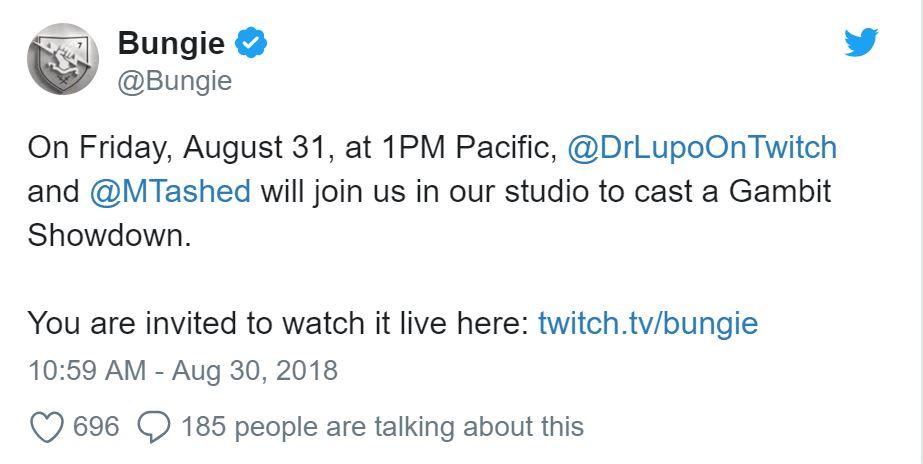 Gambit Mode is a new multiplayer mode for Destiny 2’s newest expansion, Forsaken. This mode is 4v4, with two teams of four players racing to defeat the most enemies in time.

Players will rush to be the first to defeat the mode’s end boss, called a Primeval. The more enemies a team kills, the more enemies they can spawn on the opposing team’s side of the map. Known as blockers, these enemies are larger than the rest of the fodder.

Gambit Mode will also feature a PvP segment by allowing players to spawn on their enemies’ side of the map – but only for thirty seconds. When time is up, they will be whisked back away to their own territory.

Considering both Dr Lupo and MTashed’s extensive history with Destiny, fans of the duo and the franchise alike will want to  witness their first look at the series’ newest addition.