A Smash Ultimate leaker who accurately said Byleth would be the fifth DLC fighter has doubled down on claims that Crash would be the sixth fighter, and his reveal could come as early as February.

MandyCan gained notoriety after a series of correct predictions including Byleth coming to Smash and several Game Awards leaks.

As Dexerto previously reported on October 21 2019, the leaker claimed that Byleth would be the fifth fighter in Smash’s first Fighters Pass and that Crash would be the next character announced. 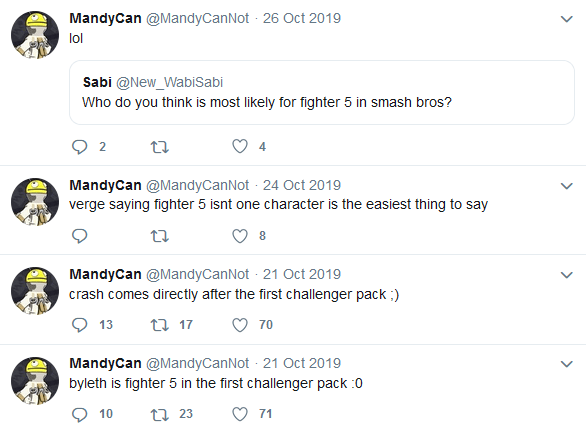 While the leaker does not know when Crash will be revealed, he does have a few ideas. “It could be in the February Direct, it could be at E3,” he said in a Twitter reply.

So far, a February Direct has not been officially announced by Nintendo, but there are some hints that suggest one is imminent. Back in January, GameStop updated its SKU listings. SKU stands for Stock Keeping Unit and are used to keep inventory at stores.

In the past, GameStop SKU updates have occurred just before titles were revealed in Nintendo Directs.

directly as in terms of order, not time. i do not know when Crash will be revealed. it could be in the February direct, it could be at E3.

Dexerto reached out to MandyCan and he claimed to be 100% sure that a February Direct was coming and Crash is still Fighter 6.

While it’s possible that we get the next fighter reveal in February, it wouldn’t be surprising if the announcement comes at E3 2020 in June.

It was, after all, at E3 2019 that Nintendo announced not one but two fighters coming to Smash Bros Ultimate: Banjo-Kazooie and Dragon Quest’s Hero.

Who will the six DLC fighters be?

With the second Fighters Pass only scheduled to conclude in December 2021, Nintendo has a lot of time to craft the six upcoming fighters.

Smash Ultimate’s Fighters Pass Volume 2 is currently available for purchase. It includes all six of the new characters, new stages and music tracks as they become available.