The latest Pokemon Sword and Shield Expansion Pass trailer was packed with plenty of info about the upcoming DLC, so let’s run through some of the most interesting details you might have missed.

The downloadable content packs for Sword and Shield allow trainers from around the world to catch new Pokemon, meet a variety of colorful characters, and take on exciting new challenges as they explore Galar’s two neighbouring islands, making it must for any Pokemon fans who want to catch ‘em all.

While the latest trailer gave us plenty of details about the upcoming Isle of Armor and Crown Tundra expansions, it has also left a lot of questions unanswered. Fortunately, we’ve donned our lab coats and unleashed our inner Professor Oak to help uncover the trailer’s biggest secrets. If you’re hungry for more Pokemon news or just wish to know more about the Isle of Armor DLC, then make sure you check out all of the hidden details we’ve uncovered below. 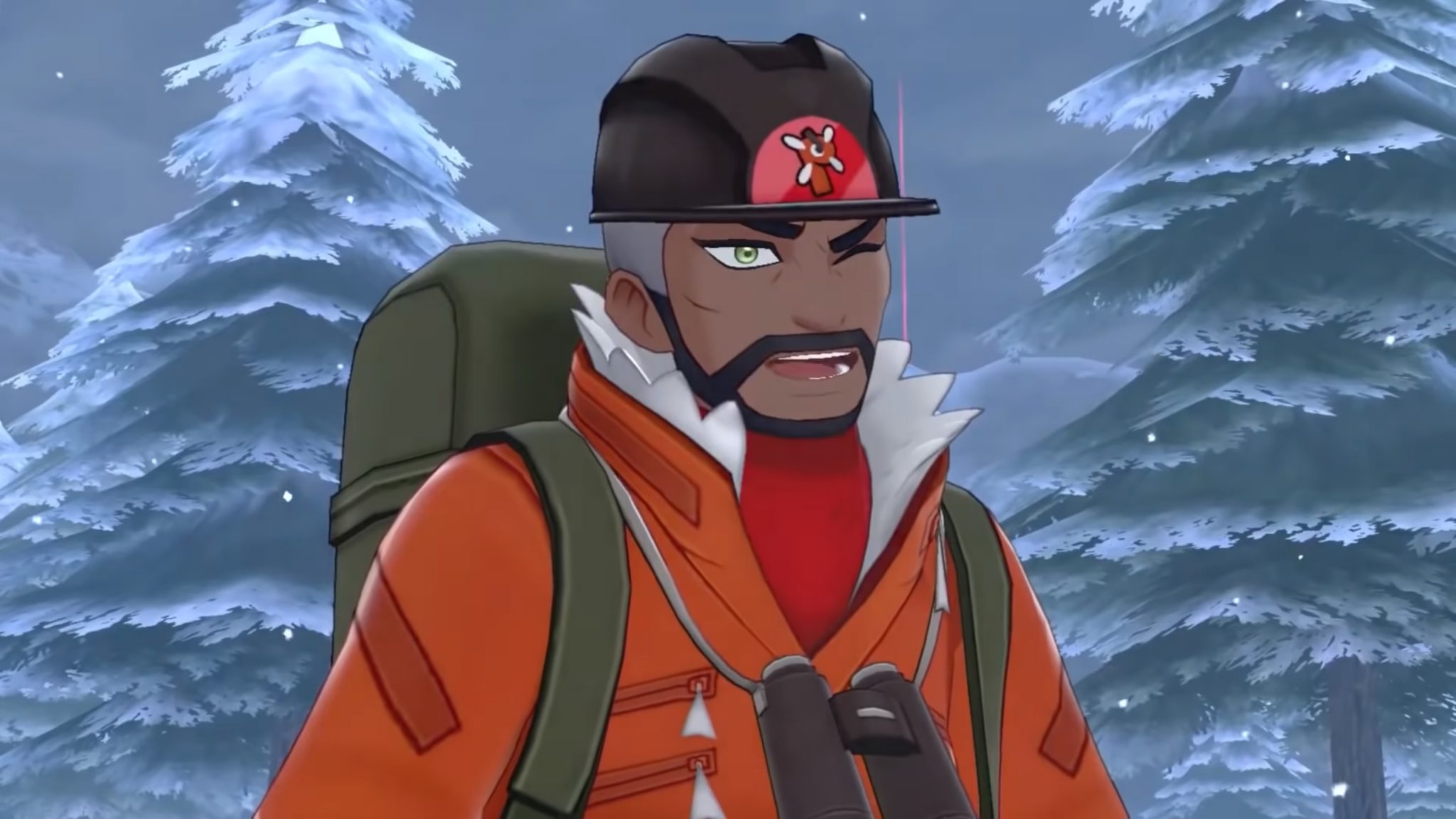 Is it a Pokemon or is Peony just messing with us?

An unknown Pokemon has potentially been found by eagle-eyed fans and it has left many pondering what it could be. As you can see from the picture above, there is a never-seen-before logo printed on the helmet of the new character, Peony. This logo is also emblazoned upon the hard hats of the new mountaineering gear, outfits that we’ll likely get to wear as we explore our way through the frozen lands of the Crown Tundra.

While this could merely be Peony’s logo for the Crown Tundra’s exploration team (capital P for Peony), the trailer does go out of its way to show it off a number times. There’s currently very little info surrounding this minor detail and for now, all we can do is speculate, but we’d love it if this little logo turned out to be a Galarian Unown.

Recycle unwanted items with the Cram-o-matic 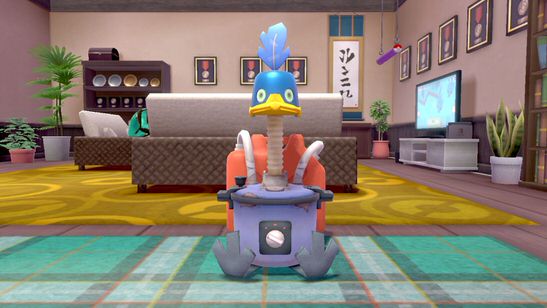 The Cram-o-matic will finally allow us to recycle all those unwanted items.

Sword and Shield’s Isle of Armor trailer may have showcased plenty of pocket monsters and exciting locations to discover, but there were also a number of new features shown off as well. One of those being, the Cram-o-matic. This rag-tag device is obviously inspired by Cramorant and allows the players to recycle any unwanted items in exchange for a new one.

It may not be the most exciting takeaway from the trailer, but it’s certainly one that will likely prove invaluable to our Isle of Armor adventure. The Cram-o-matic can be found inside Mustard’s dojo, so you can supplement your training by helping out with the environment. Not to mention that being able to trade in unwanted items for a shiny new one is certainly a great idea and one that we hope transitions over to future Pokemon titles.

Similarities between Peony and Rose 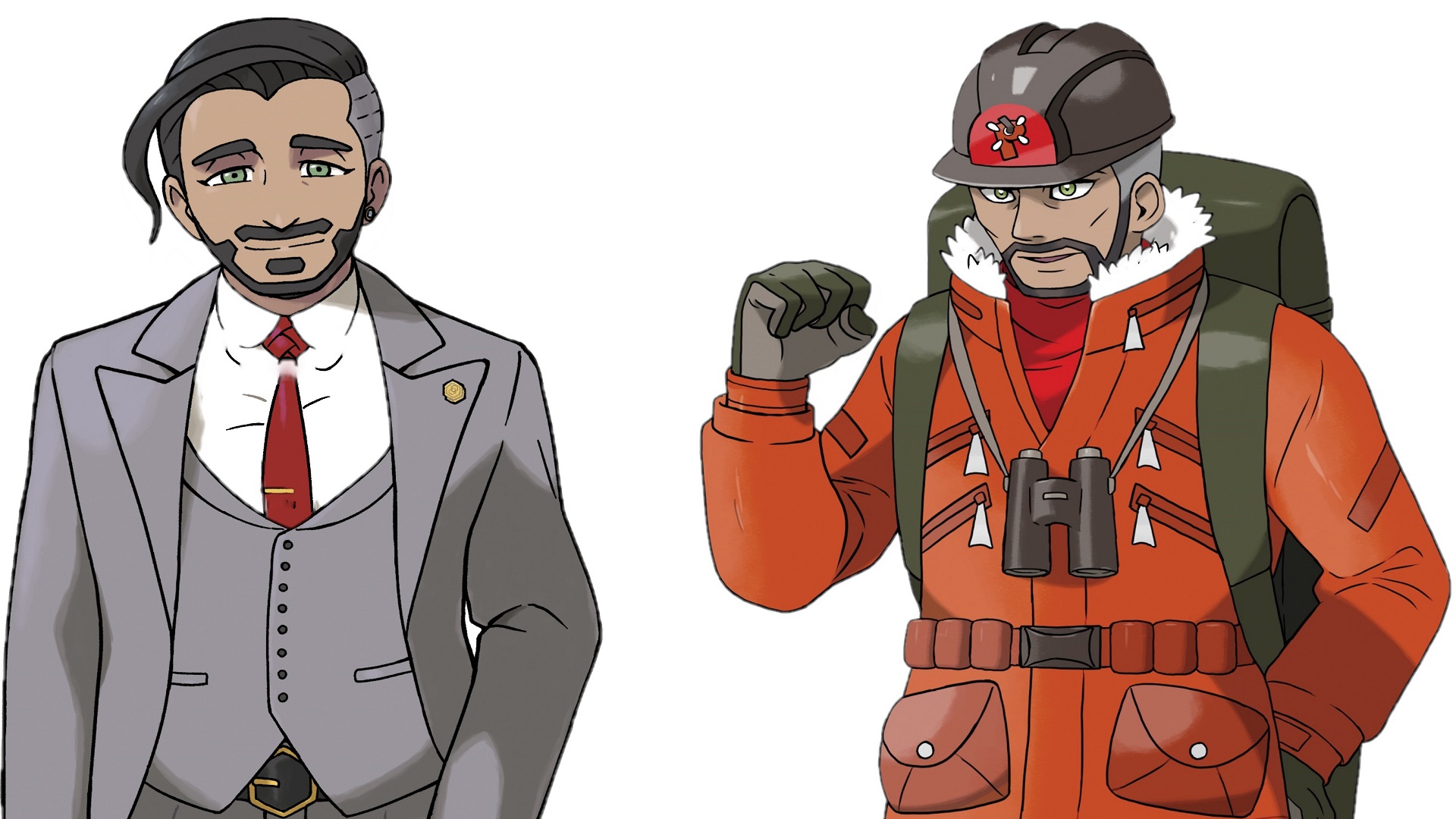 The similarities between these two are rather uncanny.

While Peony may not be featured in the Isle of Armor expansion (appears in Crowned Tundra), he was heavily shown throughout the latest trailer – in fact, we got several good glimpses of this somewhat familiar looking character. As you’ll most likely know, the Pokemon series has never shied away from creating characters that look strikingly similar to one another, just look at Professor Oak’s Alolan cousin, Samson Oak. They both share the same last name and look almost identical, so it really shouldn’t come as a surprise that both Peony and Rose have some rather uncanny similarities.

Firstly, both Peony and Rose are named after flowers. Interestingly, peonies are known to grow in mountainous regions and can even withstand icy temperatures (perfect for the Crown Tundra), while roses thrive in warmer climates and prefer to soak up the sun’s rays (Galar Region).

However, the most significant similarities are featured in both Peony and Roses’s facial features. For example, both characters have the same green eyes, similar facial hair, skin tone, and hairstyle. We’d certainly be surprised if these two weren’t connected in some way! 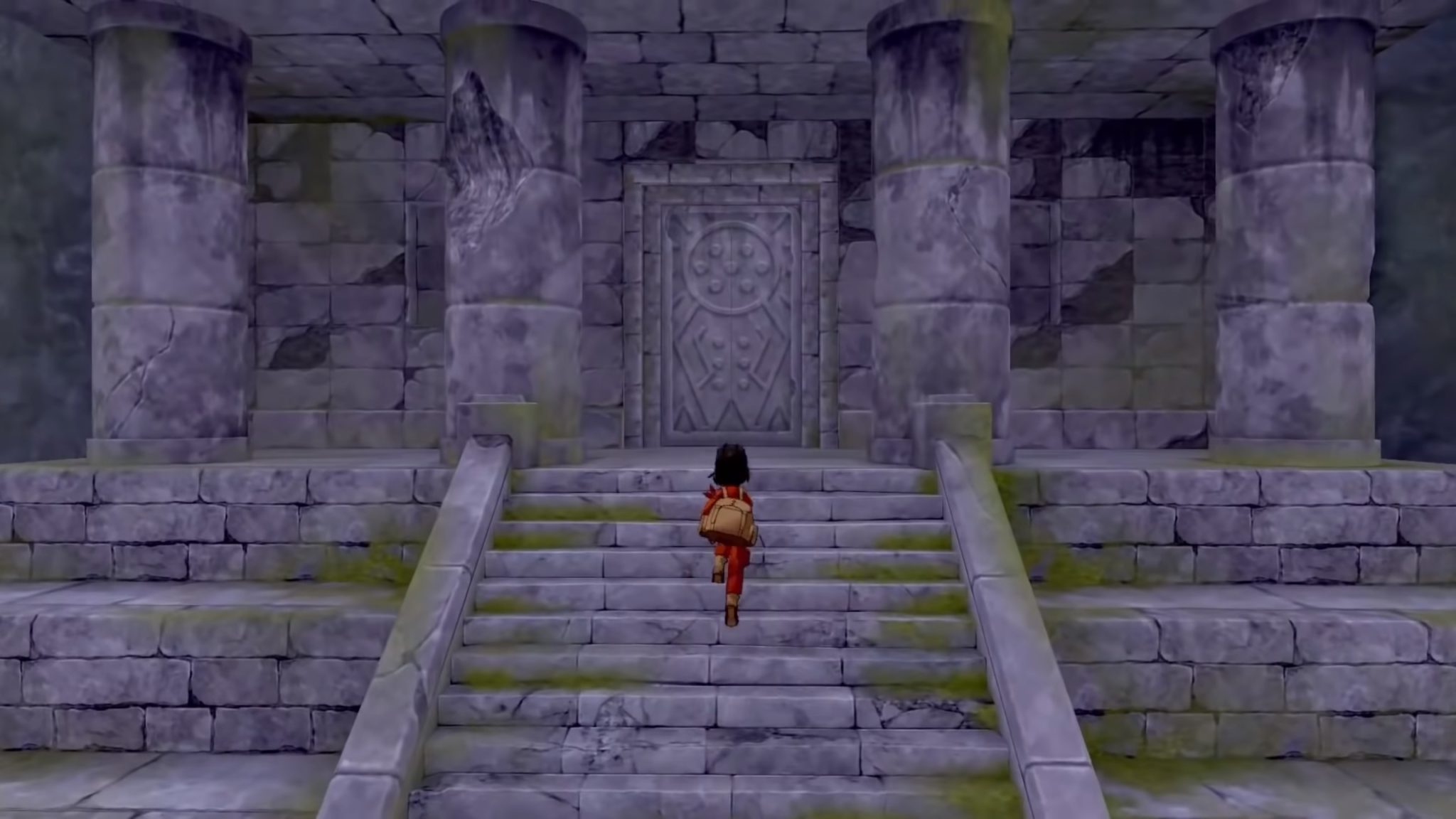 The three temple ruins featured in the Pokemon Isle of Armor and Crown Tundra expansion pass trailer appear to be home to the Legendary titans, Regirock, Regice, and Registeel. In previous Pokemon games, trainers have had to decipher codes written in braille in order to catch each of the Regis, and while we don’t see any brail patterns on the wall, we do get a glimpse of how players can unlock the cavern doors.

The first temple appears to be the home of Registeel as the statue in the background has seven dots displayed in a hexagonal formation, the exact same as those seen on Registeel’s face. Upon entering the temple, the player is then shown stepping on circular beacons of light that appear formulate that of Registeel’s facial pattern. We think it’s likely that trainers will need to replicate each of the Regis facial patterns in order to open their corresponding temples.

Either that, or these are new Regis altogether! Very possible. 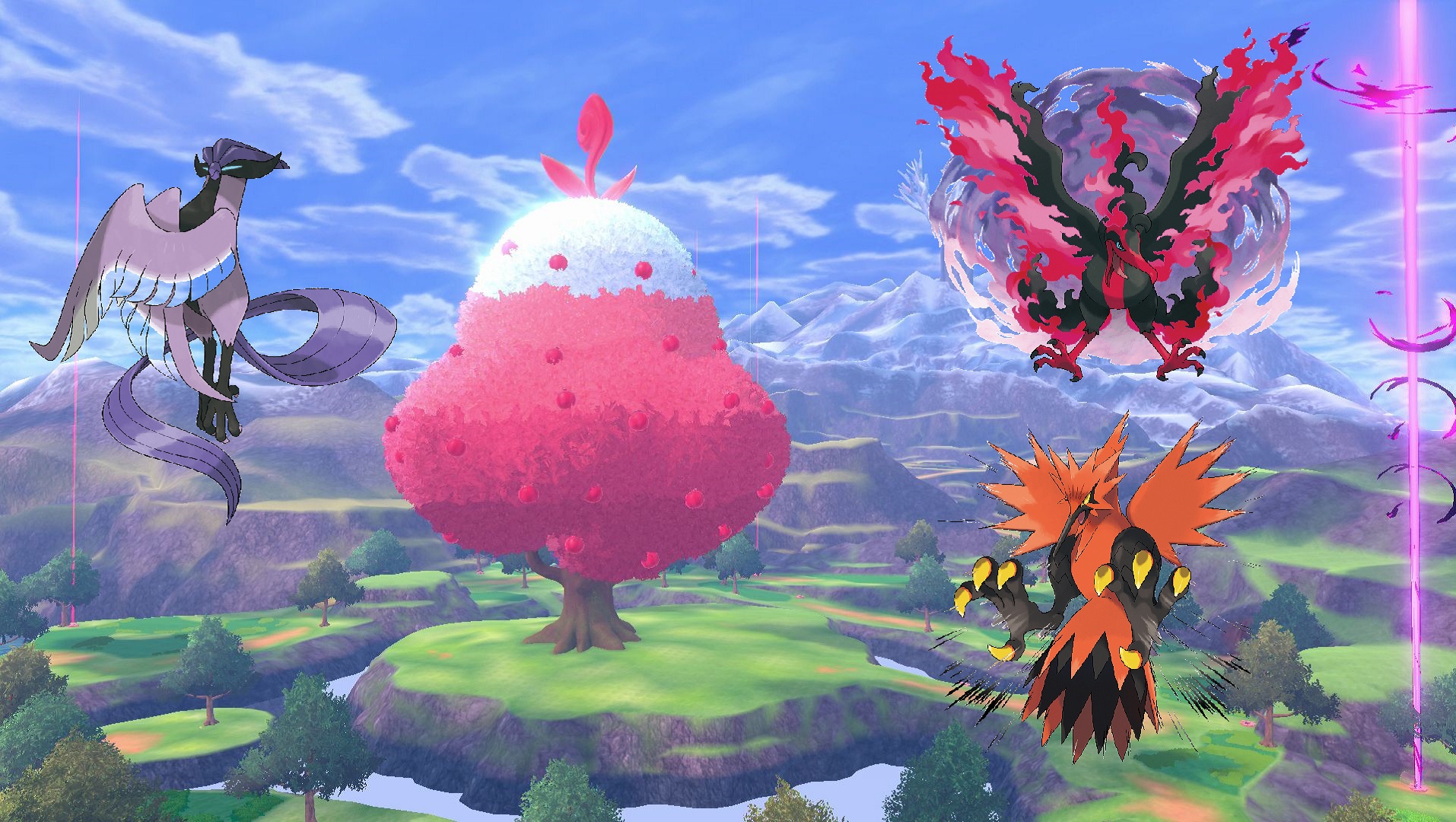 There might be a connection between the giant tree and the legendary birds.

Kanto’s three legendary birds are some of the most instantly recognisable Pokemon in the series, so many fans will be happy to see their return when the Crown Tundra expansion is released. To make things even better, each legendary bird (Articuno, Zapdos, and Moltres) now have their own Galarian forms. In the video, we get a glimpse of a deadly battle taking place beneath a gigantic tree.

Galarian Moltres can be seen using its signature move, Fiery Wrath, against an opposing Zapdos, but just as the attack is about to connect, Zapdos dodges and follows up with a Thunderous Kick. The fight concludes when Articuno shoots its Freezing Glare directly in front of both birds. While this is just speculation, we believe that the gigantic tree featured in the trailer has a direct connection to the appearance of the three legendary birds.

Firstly, the battle takes place beneath this tree, suggesting that it might be a resting ground or a place of importance to these new Galarian forms. Another interesting feature is that the tree’s leaves appear to share the exact same colouration as the legendary birds themselves.

Perhaps the colour of the tree’s leaves indicates the type of legendary bird that appears during that time? We sadly won’t be able to confirm this until the Crown Tundra is released, but it’s certainly an interesting detail that leaves us wanting more.