Nintendo announced the hugely anticipated 8th generation of Pokemon games on this year’s Pokemon Day. Pokemon Sword and Shield will be released on the Nintendo Switch in late 2019.

The Pokemon Direct presentation gave trainers their first glimpse of Gen 8. The Galar region, new starter Pokemon and the game’s graphics were all shared.

Although the footage was short, and a lot of it not actual gameplay, it did give the chance for Pokemon fans to compare the upcoming graphics with Nintendo Switch’s previous Pokemon entry, Let’s Go.

With the hype behind the next Pokemon game, along with promises from important figures within the Pokemon company, a lot is expected from Pokemon Sword and Shield.

From the few snippets that were provided the graphics look somewhat limited. That is at least in comparison to fellow Nintendo Switch game, Zelda: Breath of the Wild.

Nevertheless, feedback from Pokemon trainers suggests fans are more than happy with what has been seen so far. The graphics are of a similar style to Pokemon Sun and Moon but more refined and inline with the Nintendo Switch’s hardware capabilities.

One Twitter user has made a direct comparison between Pokemon Sword and Shield with Pokemon Let’s Go. RuffledRowlit located a like for like Pikachu image and provided the following comparison. 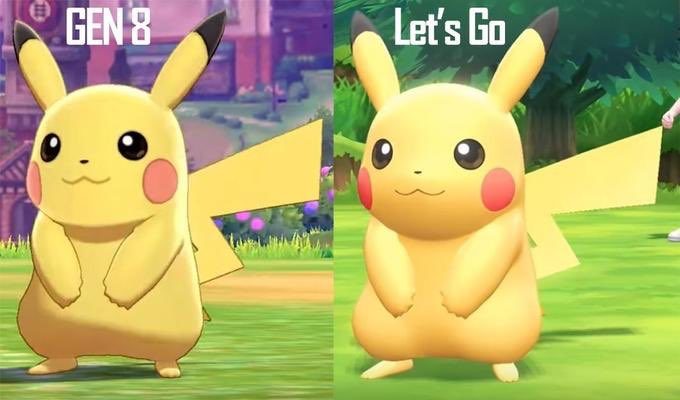 The differences, and most notably the styling, between the two games is substantial. Pokemon Let’s Go appeared to go for realism whereas Pokemon Sword and Shield has gone for the more traditional Pokemon anime style.

Furthermore, the Pokemon are outlined in Gen 8 but have a more Pokemon Stadium feel (with modern day graphics) in Let’s Go.

Hopefully a true gameplay trailer reveal will provide the opportunity for further comparisons in the coming weeks and months.