Pokemon Let's Go - Everything We Know So Far - Dexerto
Pokemon

Pokemon Let’s Go – Everything We Know So Far

Pokemon Let’s Go is not a remake of Pokemon Yellow but does take heavy inspiration from the original Gameboy game.

The setting for the game is the Kanto region and it is the original 151 Pokemon you’ll be trying to catch, with the exception of one!

That means familiar locations such as Viridian Forest, Lavendar Town and the iconic Pallet Town will all feature. It also means gym leaders from the past will be waiting to battle!

Consequently, Pokemon Let’s Go will provide the nostalgic feeling for Pokemon fans who played when the series first came out but also appeal to those wanting to play through a new Pokemon game.

Unlike Pokemon Red and Blue however, your starting Pokemon, Pikachu and Eevee, can be found in the other version of the game. Additionally, there will be “partner powers” and exclusives moves on each game.

Much like Pokemon Red and Blue though, there are some Pokemon which can only be found in each version though.

At its core Pokemon is largely a single player game. However, battling friends and foes alike has always been part of the Pokemon series. You can do this either locally or online.

Therefore, for Pokemon trainers wanting a competitive experience you’ll either have to wait or stick with one of the older Pokemon games to fill that competitiveness need. 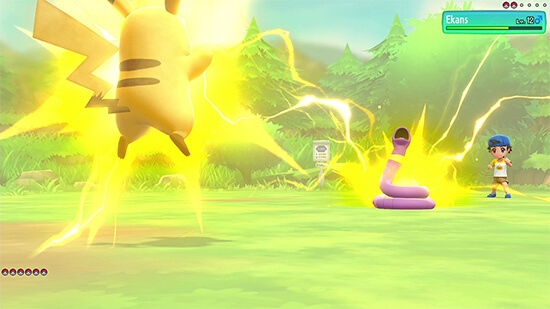 Whilst the battling may be disappointing to some, Pokemon Let’s Go does introduce a new cooperative mode. This is done in local multiplayer in a mode called “support play”.

Essentially a friend can enter the Pokemon world with you as you both explore the Kanto region and find Pokemon.

There is also an advantage of doing cooperative mode as when it comes time to battle you can throw Pokemon balls simultaneously. This increases the chances of catching that Pokemon.

One big change between the original Pokemon games and the latest 2018 iteration is the catching of Pokemon. Past Pokemon games would see you weaken a wild Pokemon with one of your own before throwing a Poke ball.

Fast forward to 2018 and the process of catching Pokemon is far simpler. Pokemon Let’s Go adopts the same system from Pokemon Go whereby you throw a Poke ball at the Pokemon. The likelihood of catching said Pokemon is determined by how small the circle is around the Pokemon when the Poke ball is thrown.

Pokemon Let’s Go and Pokemon Go are entirely different games but you can transfer Pokemon from Go to Let’s Go. Any Pokemon caught on Pokemon Go can be transferred (via bluetooth) to Pokemon Go.

Once transferred those Pokemon will reside in Go Park. You will need to visit Go Park, a replacement for the Safari Zone, in order to re-catch them. A word of warning, once a Pokemon is transferred from Pokemon Go, it cannot be transferred back.