Anticipation is growing for an announcement of the new Pokemon game scheduled for late 2019. The game will introduce gen 8 and be exclusively for the Nintendo Switch.

Pokemon King and Queen, according to the rumor mill this is the title of the 2019 mainline Pokemon game. An additional rumor is that the setting of the game is Britain, which is perhaps suggestive because of the title.

Sharp Pokemon fans have been trying to piece together the below, supposedly innocuous tweet. Junichi Masuda is essentially the head of Pokemon so his tweets command attention. 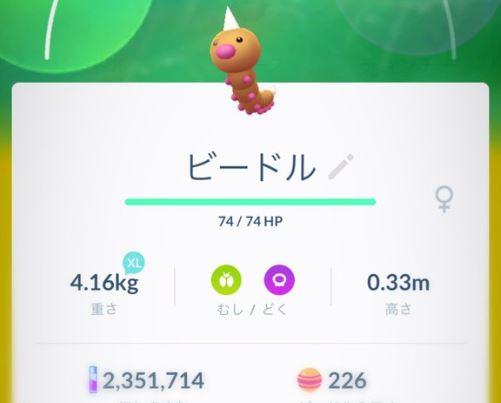 Is there further meaning behind the Weedle in Junichi Masuda’s tweet?
501

His tweet shows a Weedle that he caught on Pokemon Go. Now, most Pokemon fans would look at that and think nothing of it. However, two Twitter users, thought there was more to it.

Here’s where it gets clever. Firstly, the picture shows 226 Weedle candies. This has been interpreted as 2/26 (February 26) which would make sense as the reveal date. This is one day before the annual Pokemon Day which, in Japan, would still be February 26 in North America and Europe.

This could of course be coincidental but there is more that suggests it might not be. The picture shows 2,351,714 Weedle Stardust, a supposedly random number. It’s a little bit of a stretch but some simple maths may suggest otherwise. 2,351 adds up to 11 while the 714 can be changed to 7+14=21. This results in 11/21 (November 21) which would seem a reasonable release date. However, it should be noted that this is a Thursday which isn’t a typical release date day.

In addition to all of this, the 4.16kg weight of the XL Weedle has also been interpreted to have a secret meaning. This converts to a date of 4/16 (April 16) and this has been suggested to be a noteworthy Pokemon 2019 news date, perhaps a gameplay trailer.

CP 199=Slowking
416=Vespiquen
Pokémon King and Queen or just crown and scepter
Poison and Bug Type represents the legendary Pokémon, according to the leak, a Spider and a Butterfly

Another tweet, embedded above, thought there were even more clues to be gathered. The Weedle has a CP of 199 which in terms of the Pokedex matches up with Slowking. There’s nothing overly special there, but combined with the below it gets more interesting.

While the 4.16kg had been interpreted as a date elsewhere, if you align it with the Pokedex, then it goes to Pokemon 416, Vespiquen.

Slowking is a king, by name, while Vespiquen is the bee queen. This is how the title of the new 2019 Pokemon game came to light: Pokemon King and Queen.