Some Overwatch players think one of the game’s best traditions should come to the home screen during the Winter Wonderland event.

Starting in 2017, Overwatch began a tradition of streaming game director Jeff Kaplan sitting in front of a cozy fire, occasionally moving for hours on end.

In 2018, other Overwatch team members and personalities joined Jeff in front of the fire, but there were still plenty of hours of awkward staring in front of a fireplace.

We probably won’t know any details about the 2019 stream until it actually happens, but Overwatch fans have come up with a way to incorporate it into the game.

Reddit user DocterrificDoc posted a screenshot of a contemplating Jeff during his Yule Log stream underneath the Overwatch main menu.

“Winter Wonderland is (presumably) in a months time,” they wrote along with the masterpiece. “THIS is the menu screen we actually want to see Blizzard!” 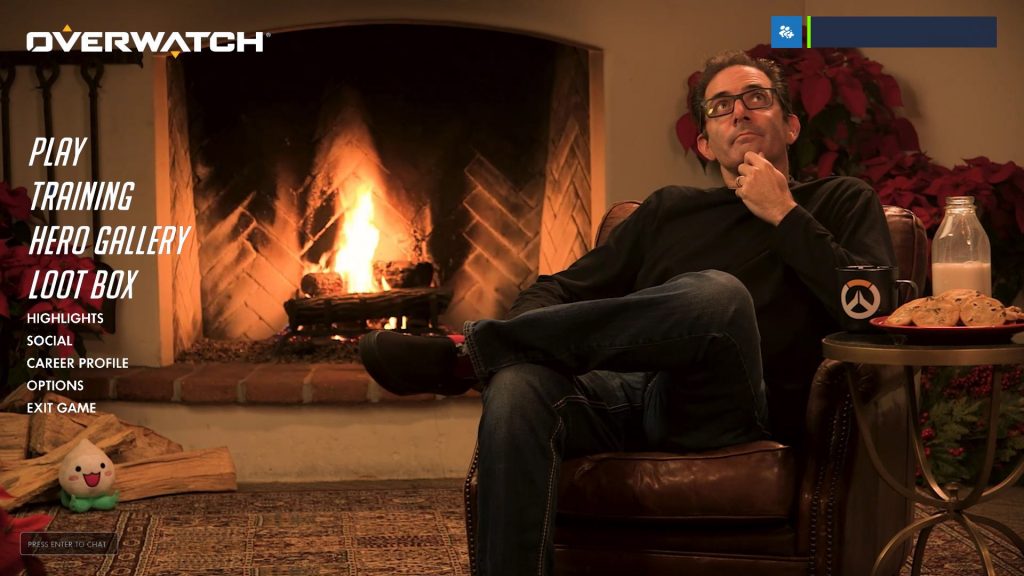 What could Jeff be thinking about? Credit: DocterrificDoc

Overwatch does get special home screens for OWL and for every seasonal event, so why not a special one for the Yule Log stream this year?

Having it be the actual stream playing in the background would be ridiculous, and might not even be possible to do.

It’s not the first time some fans have requested Jeff be inserted into the game – a spray of his face has been requested before, but so far no dice.

What will we see in the Winter Wonderland event?

Overwatch developers gave us a sneak peek at an upcoming Sigma skin that looks made for the event, but other than that what’s coming is still up in the air.

The Winter Wonderland event also usually comes with a winter reskin for one of the game’s maps, but again, we don’t know what map it could be this year.

Things usually get rolling with the seasonal event towards the beginning of December, but no official release date has been announced just yet.