Some Grand Theft Auto Online players think the new set of “Gerald’s Last Play” missions could be hinting at upcoming news on GTA 6, but others aren’t as convinced that’s actually the case.

On Friday, April 24 Rockstar rolled out a set of six new contact missions called “Gerald’s Last Play” in which players assist the dealer in preparing to exit the Los Santos drug market.

Gerald begins by telling players “Word is we got hard times coming. Way I see it, we gotta make bank before s**t hits the fan.”

Rockstar added new Gerald contact mission in Online called “Last Play” today. Here is the message from Gerald. Could it mean something? I mean, it’s an interesting word play here. from r/GTA6

“Could [the message from Gerald] mean something?” Reddit user bozidarilic asked. “I mean, it’s an interesting word play here.”

Some users said it was obvious from what Gerald and Rockstar are saying about the missions that this is all leading towards a brand new heist, but user Hazebuster2708 pointed to clues around GTA Online’s map that could paint a slightly different picture.

“Nah, we make money BEFORE Before S**t Hits the Fan,” Hazebuster proposed. “The next thing is no heist”

To back up their hypothesis, Haze pointed to the alien invasion auto shop floor players can unlock, and a mysterious poster that reads “Los Santos 2020” with an image of an alien above it. 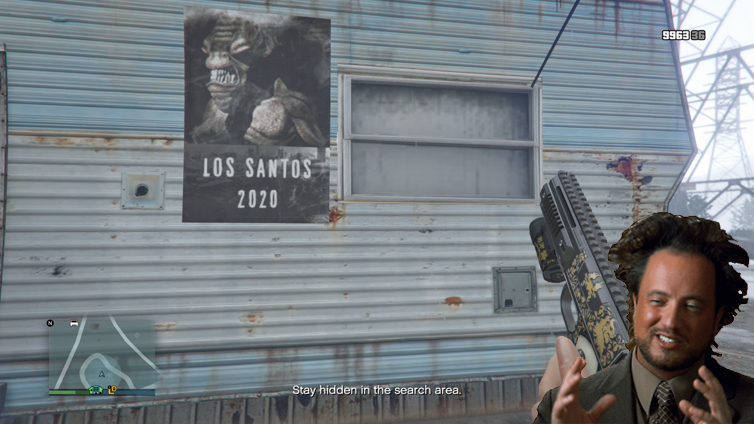 Gerald could be leading players to a new heist, but hear us out: aliens.

Building off of Haze’s initial evidence, another user named MrBoomin31 suggested that “s**t hitting the fan” could signal the final chapter for GTA 5’s Los Santos.

“If it’s an alien invasion, I can see them using that to end the “world” sorta for gta online to make way for a new gta online in 6,” MrBoomin mused. “The fall of Los Santos kinda.”

Other users, though, didn’t think anything that extreme was on the horizon. What could happen, some suggested, is that Gerald is simply killed off.

Maybe Gerald will simply be moving out of that tiny apartment after all these years.

Gerald’s message certainly is a bit ominous, so players would be wise to stay on the lookout for what’s to come, whatever it ends up being.