Will there be a Game of Thrones and Fortnite crossover event in Season 8? - Dexerto
Fortnite

Will there be a Game of Thrones and Fortnite crossover event in Season 8?

If you’re a Game of Thrones fan who doubles as a Fortnite player, the possibility of a crossover event between the two will definitely be something to look forward to – but could it really happen?

There have been number of in-game items, occurrences and ‘clues’ that have started to catch our eye since the beginning of Fortnite’s Season 7 and moving into Season 8, and the fan theorists among us are beginning to wonder how, and if, a GoT crossover could ever work in the battle royale game.

*Before continuing, we should advise you that there are some Game of Thrones spoilers throughout this article. If you’re not up-to-date with the latest season, you might not want to read on.*

So, what’s got us so excited about a potential crossover between one of the goriest television programmes in history and a game that is enjoyed predominantly by teenagers and under 25s? Let’s begin with the snow…

“Winter is coming” is one of the most famous phrases from Game of Thrones and George R. R. Martin’s ‘A Song of Ice and Fire’ books. To put it very simply, seasons in Westeros (Martin’s imagined world) don’t work like we’re used to. Instead, summer can last for years and so can winter. The Starks of Winterfell are the most wary of winter’s arrival and they often use the phrase in conversation.

In the books, and the TV show, winter slowly begins to draw in on Westeros and it is set to be the bleakest in living memory. In fact, it’s so bad that an army of White Walkers and wights (kind of like snow zombies) led by the ‘Night King’ are beginning to invade from the North. This basically means that the lives of all men are in danger. 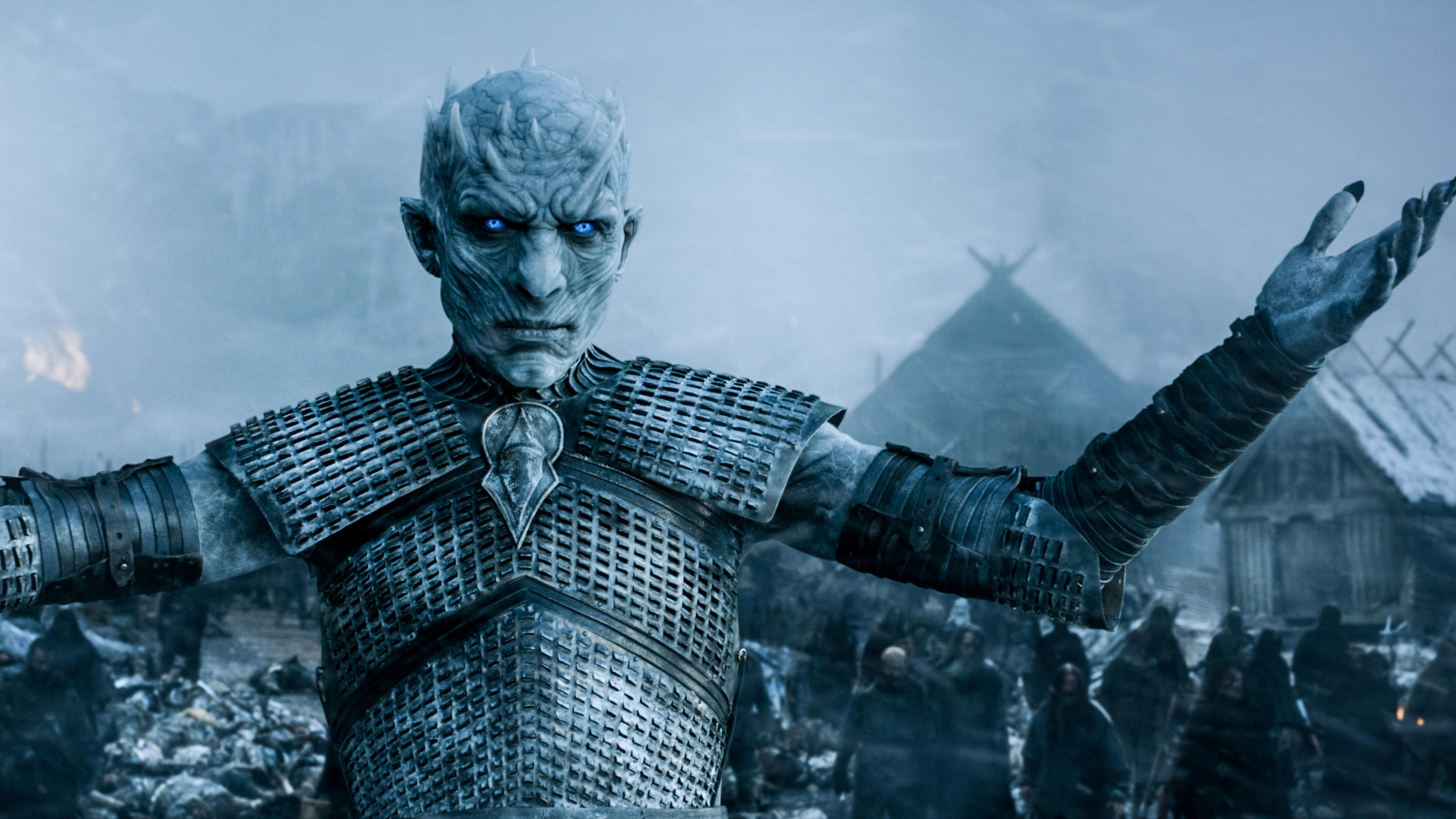 Could Game of Thrones’ Night King ever bring his hordes of White Walkers to Fortnite?
[ad name=”article3″]

We haven’t seen any White Walkers or wights in Fortnite (well, not exactly – see below), but the cube monsters from Season 6 would definitely be a good base to work from.

Winter also definitely arrived when the Iceberg biome became a part of the map at the start of Season 7. We saw the map entirely covered in snow once this season, on Christmas day, and some data miners seem to believe that it could happen again**.

This alone is hardly evidence that any sort of crossover event could be on the horizon, but Polar Peak’s numerous secrets make the fan fiction rather more believable.

Let’s start with the throne room: if you haven’t been to Polar Peak yet, there’s a throne inside a large room that reminds us of the Iron Throne from A Song of Ice and Fire. There’s only so many ways that a throne can look, but those shards of ice certainly have a similar feeling to them: 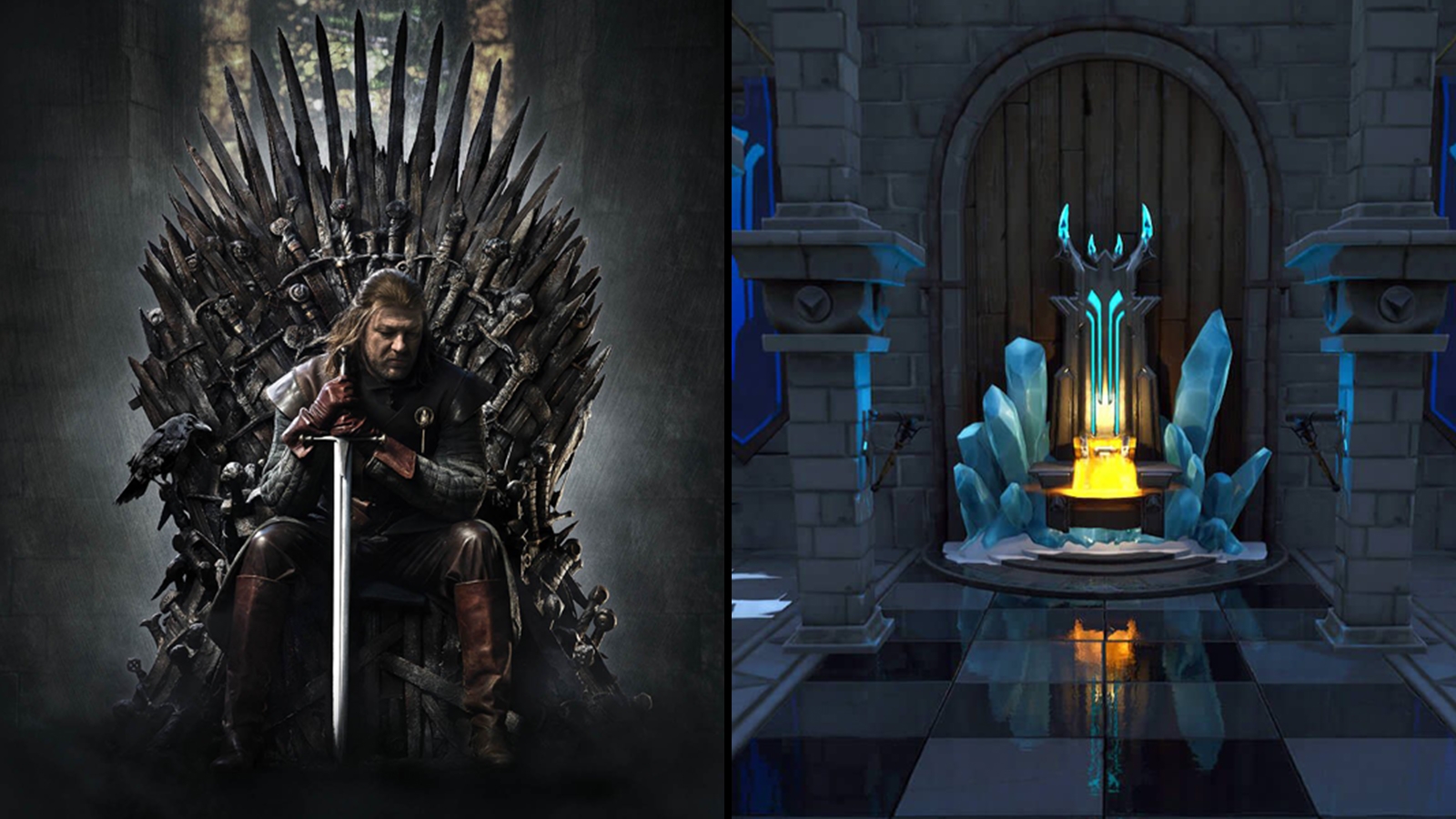 Polar Peak’s throne might not be quite as formidable as the Iron Throne, but there are still some similarities.

Now, bear with us for a while longer. Thrones are pretty standard inclusions in any throne room, hence the name, so the fact that there’s one in Polar Peak probably doesn’t mean much, even if it is believed to belong to the ‘Ice King’. Where have we heard a name like that before…?

Of course, the Iron Throne from GoT is situated in King’s Landing, which is different in virtually every way to Polar Peak. King’s Landing is one of the last areas of Westeros that will be engulfed by winter due to its location in the South.

This is certainly a kink in our tinfoil hat armor, but what about those dormant ‘dragon eggs’ that data miners keep finding under Polar Peak?

Dragons are a massive part of the Game of Thrones story, with Daenerys Targaryen successfully hatching the first live dragons in over a century. So, dragon eggs in Fortnite under a throne made for an Ice King suddenly makes the theory seem less far fetched! 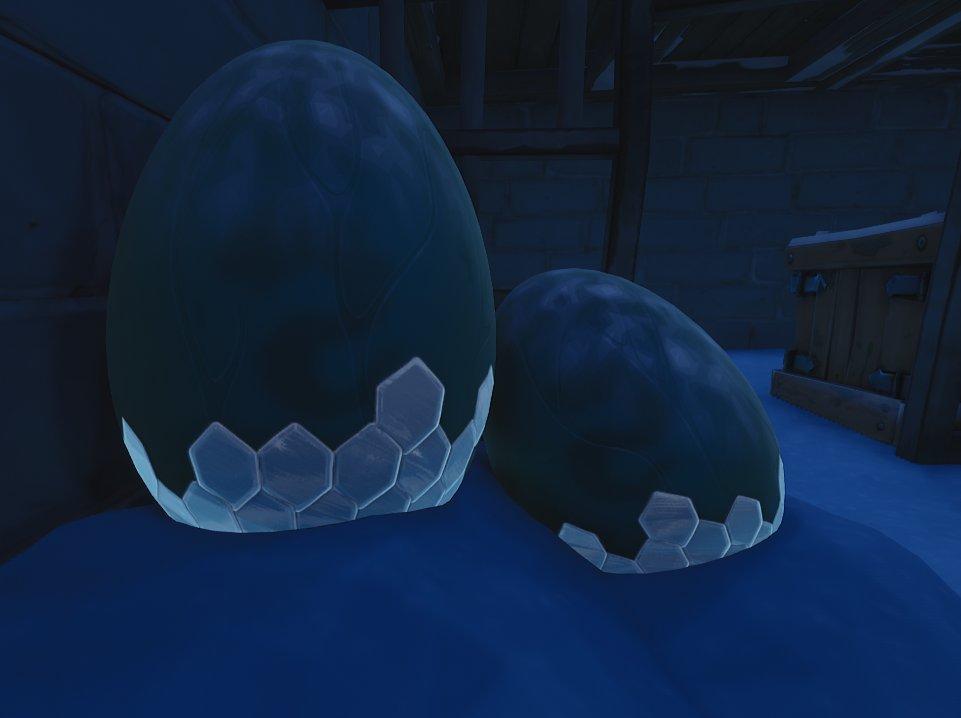 There’s no guarantee that the eggs under Polar Peak belong to a dragon, but it does seem to be the general consensus.

These eggs have since dissapeared from Polar Peak in Fortnite, and fans now believe they are about to hatch – perhaps just in time for the start of Season 8 of Game of Thrones?

Spoiler alert: If you’re not up-to-date with Game of Thrones, we would advise skipping this next paragraph.

In Season 7 of the television series, the Night King manages to resurrect one of Daenerys’ dragons and turn it into some sort of White Walker ice dragon that breathes blue flame! We don’t know much more about the zombie dragon thing, but perhaps the eggs under Polar Peak could hatch into similar creatures?

We’ve already had enough cosmetics and imagery in Fortnite to be able to picture what an ice dragon with the Ice King riding on it could look like, and we’re willing to bet that those petrified eggs under Polar Peak won’t stay unhatched for long. 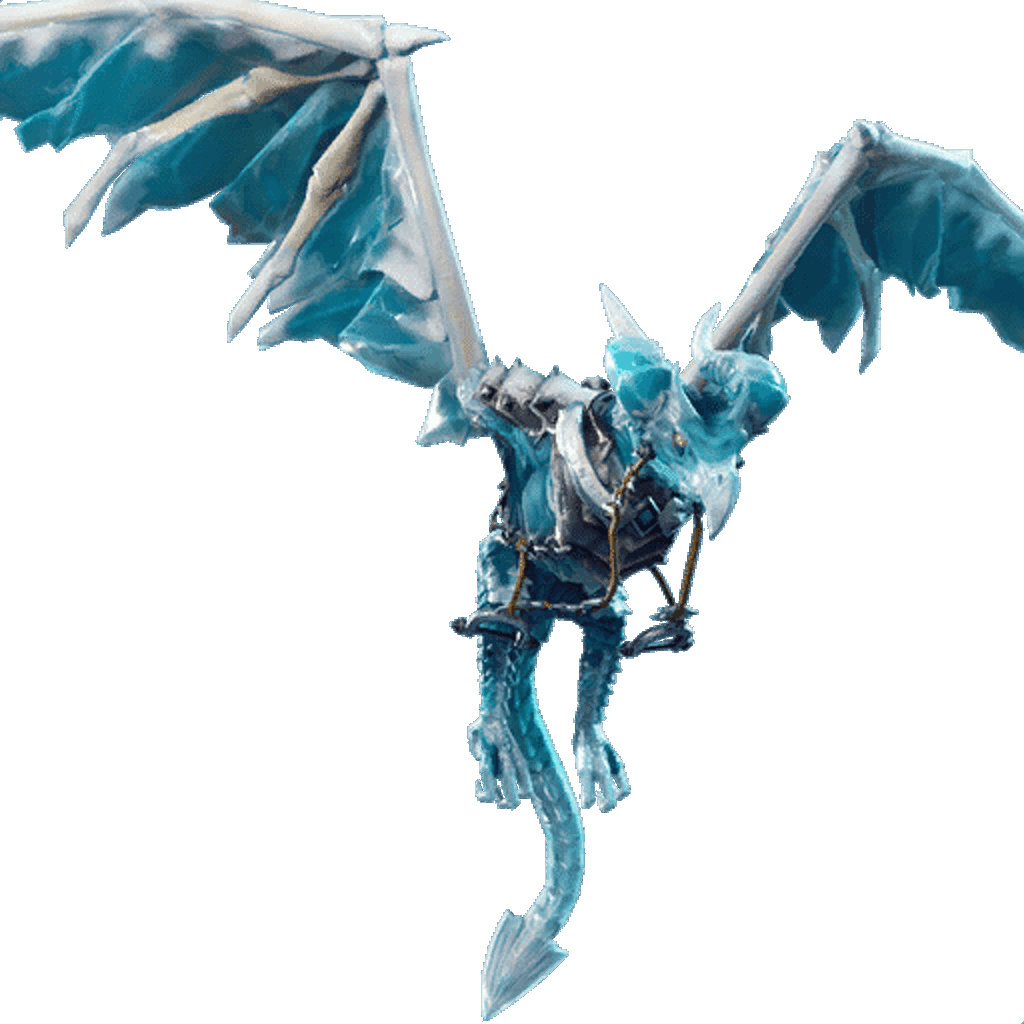 The Frostwing glider gives us an idea of what an ice dragon would look like.
500

A creative Fortnite player even imagined what Game of Throne’s Castle Black would look like in Fortnite, with incredible attention to detail.

You can try the map out for yourself by entering the following code in Creative mode:

We’re willing to admit that we’re clutching at straws with some of our evidence, but we’ve already convinced ourselves that the crossover, though unlikely, would be absolutely epic.

We’re in no way suggesting that the main game will become some sort of Westeros copy, but a limited time event like the Fortnite x Avengers one could certainly go down well and provide excellent exposure for all parties.

One major sticking point is that the eighth and final season of Game of Thrones isn’t due to come out until April of 2019; Epic Games would have to stretch out the snow and dragon egg plots for quite some time to fit in with that date.

However, the developers could still decide to make some sort of event or new item (maybe a dragon LTM?) in celebration of Season 8 for both Fortnite and GoT.

Season 8 of Fortnite is now underway, and the first episode of Season 8 of Game of Thrones will air on April 17 – which will be just in time for Week 8, or Season 8, in Fortnite.

In truth, yes, a Game of Thrones x Fortnite crossover is pretty unlikely – about as unlikely as it gets. However, nobody saw Fortnite’s Avengers crossover event coming either, and it was one of the biggest and best limited time events in the game’s history.

It can’t hurt to dream, right?

Fortnite’s v7.20 update on January 15 was followed by a number of interesting leaks from data miners. Most of these leaks involved upcoming skins and game modes, but one in particular caught our eye.

It would seem that, despite the criticism of the Infinity Blade earlier in Season 7, another sword item is making its way to Fortnite in the near future.

If the leaks are to be believed, this sword will be a weapon and classed as a ‘normal sword’, but we think it looks pretty darn medieval! Almost like something a GoT character might carry around. 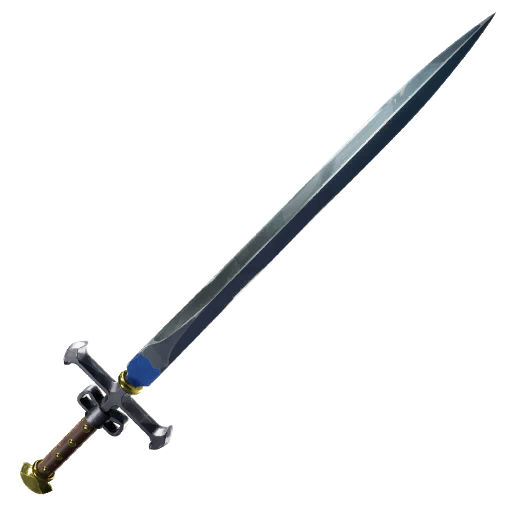 On January 19, an ‘Ice Storm’ event started in Fortnite. As a part of this event, ice zombies of some sort have also been added to the map! Could we finally be seeing our first evidence of wights and White Walkers? Epic Games are calling this new army the ‘Ice Legion’.

The strange Ice Storm event has also covered the entire Fortnite map in snow and ice for the second time in Season 7.

The snow all pretty much disappeared in Season 8, although Polar Peaks remains covered.