A professional Fortnite Battle Royale player with over $45,000 in earnings has released a statement after being publicly accused of scamming someone while illicitly selling accounts.

Luminosity Gaming’s Nate ‘Kreo’ Lou found himself in some hot water on February 7 after a video was published on YouTube that accused Kreo of scamming another Fortnite player out of $100.

According to the 17-minute video, a Fortnite player named Noah contacted Kreo to try and commission the pro to get him wins, and Kreo not only agreed to do so but also offered to sell him Fortnite accounts stocked with wins and rare cosmetic items.

After Noah purchased on account for $100, which was apparently a third of its original $300 price tag, Kreo kept changing the passwords, which did not allow Noah to access the account.

The video goes on to allege that despite Noah’s best efforts to contact Kreo to resolve the issue, he was never able to actually access the account nor get his money back.

Upon seeing the accusations made against him, Kreo quickly responded with a long post on Twitter, in which he admitted to participating in illicit account selling and took responsibility for the situation, but came short of admitting that he had actually scammed his customer.

According to the post, the account in question was never actually Kreo’s but belong to a friend of his, and the miscommunication between the three parties ended up causing a mess of the situation. 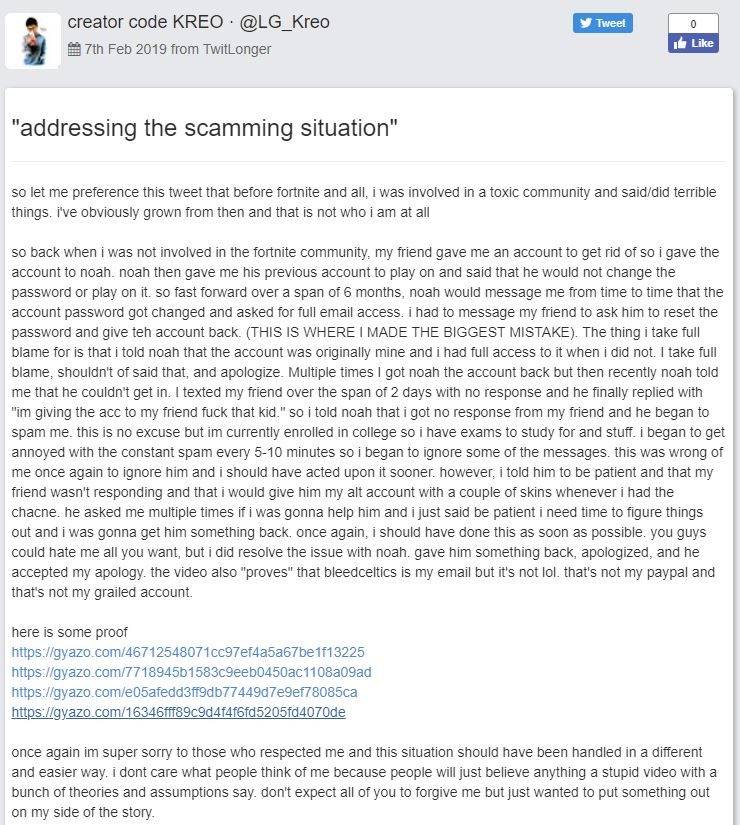 While Kreo’s response thoroughly explained his side of the story, there were some who were not buying it, including former Gankstars Fortnite pro Logan, who made some strong comments on Twitter.

“I see nothing but petty bullshit all over this Twitlonger,” he tweeted. “It’s 100% your fault. You can give the kid the money and the account after you’ve been caught and exposed. Yeah, but what would’ve happened if that video never went up? You’re an arrogant asshole.” 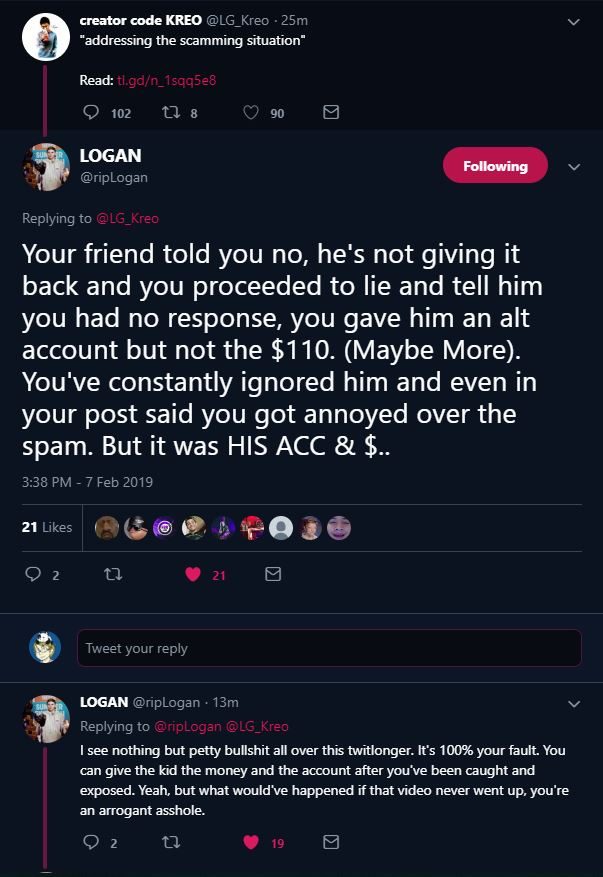 Luminosity Gaming have since responded to the public accusations made against Kreo, stating they’re looking into the situation.

“We’ve been made aware of the situation involving one of our Fortnite pros and are investigating thoroughly before making any comments or decisions,” they tweeted.

We’ve been made aware of the situation involving one of our Fortnite pros and are investigating thoroughly before making any comments or decisions. We will update the community as necessary. Thank you for your patience and understanding.

Kreo is one of four Fortnite players that make up LG’s pro roster, and he’s found substantial success since joining the org last July.

He’s gotten several money placings at officially sanctioned Fortnite competitions, including a third place finish in week four of the Summer Skirmish, which earned him $45,000.