As is common after a large update, many new bugs and glitches have recently been found in Fortnite Battle Royale. One long-standing bug appears to have reared its head yet again, as a new instant death location has been discovered.

Season 9 launched on May 9, and changed many aspects of the popular battle royale game, including the redesign of Tilted Towers and Retail Row as futuristic points of interests, and the removal of the ever-present pump shotgun. Since then though, a number of bugs have been found, including texture issues and inconsistent damage dealt by the new combat shotgun.

One issue that has affected players for a few months, albeit in different places, is instant death locations at arbitrary points of the map, as players are simply eliminated for no reason. Such occurrences have plagued the game for some time now, for example after the v8.51 update. Now, it appears a new one has been found. 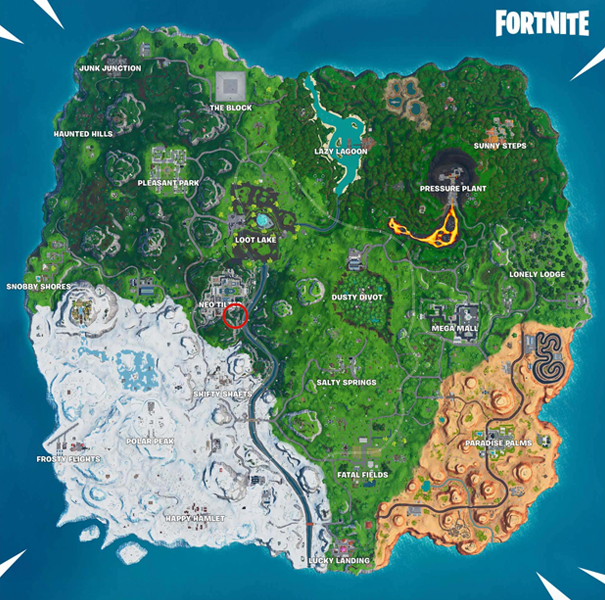 The Season 9 map, showing the location of the instant death spot.
600

Players have been eliminated in the past by just standing near these places, which were previously found near The Block and also near the Fork Knife location – resulting in many angry players being thrown out of games for no fault of their own.

A new location has now been found, just south-east of the brand new Neo-Tilted. In the clip, posted to Reddit, the player can be seen opening a supply drop. They then proceed to slide down the mountain, in order to go after the loot that fell to the ground.

However, a little way into their slide, they are killed instantly for no apparent reason, leading to the conclusion that the instant death bug has reared its ugly head once again.

Reddit users were quick to see the funny side, with one replying that “the hill was just better than you”. All jokes aside, it is clear that players want to see changes made soon, as the unfortunate bug continues to ruin some fans’ experiences.

Epic Games are yet to respond publicly to this particular issue. but, given the number of issues found after Season 9’s launch, it’s likely we’ll see hotfixes and patches released soon.