Not every addition to Fortnite Battle Royale is a fan favorite, and the introduction of the new Boom Box item might be the most unpopular yet.

Fans and pro players alike were frustrated when the item was added to the game on Sunday, December 29, just hours before the $100,000 WSOE Fortnite esports event.

The item can be thrown by players towards structures and enemy builds, with pulses of sound that emanate from the Boom Box destroying anything in its path, something which Team SoloMid pro player Ali ‘Myth’ Kabbani described as a “troll.”

While players are unhappy, Reddit user umotex12 has come up with a way to make the Boom Box less powerful, which he thinks would make it a much more interesting item to use compared to its current state.

Firstly, the Boom Box would do a lot less damage to structures built by players, with umotex12 suggesting as much as a 70% decrease in damage. The item would continue to destroy non-player buildings while remaining extremely loud and would reward players with building resources, but would have a reduced amount of health to make it easier to destroy.

By making these changes, the Boom Box would become an item primarily used for harvesting materials, meaning players could quickly gain lots of building supplies, at the cost of alerting everyone to your location due to the noise. 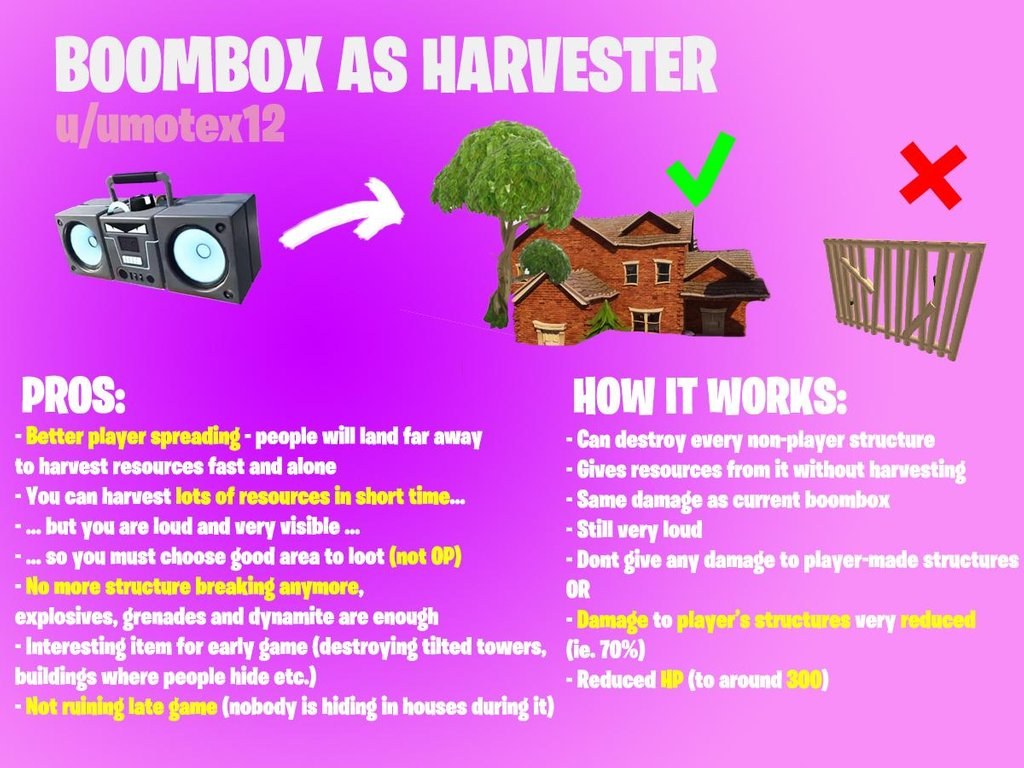 This concept would turn the Boom Box into a harvesting item.

This change would also reduce the Boom Box’s effectiveness in the late game portion of a match, as it wouldn’t do enough damage to player-built structures to be worthwhile using.

While some think this may be a good idea, others are staunchly against it, commenting that they would make it far too easy to farm materials, and that the Boom Box should just be vaulted.

The Boom Box has proved to be wildly unpopular, however Epic Games have yet to make any comment on the future of the item, and whether they will make any changes to it in an attempt to appease players.