Each Fortnite season comes with a special Tier 100 skin, a reward for reaching the highest battle pass level available. Season 11 brings us the Fusion skin, and here’s how to complete the exclusive Unfused challenges that come with it.

Fortnite Chapter 2 brought players a brand new map, with a selection of unique skins and challenges to go with it.

In the first season of Chapter 2, the Fusion skin is the big one: unlocked at tier 100, the Fusion skin and, more importantly, the Unfused challenges, offer players some new, unique cosmetics to grind for.

The Fusion skin comes in the XEV and VEX styles.

The Unfused challenges are unlocked at tier 100 and there are eight of them in total; four for the ‘XEV’ skin style, while the other four are for the ‘VEX’ style.

These challenges don’t appear to be particularly difficult and are likely stuff you’ll be able to do in the space of a few games – as long as you’re playing you’ll likely complete them anyway.

XEV: Carry a teammate out of the Storm (1)

XEV: Revive and Reboot a teammate (1)

XEV: Assist a teammate with eliminations in different matches (10) 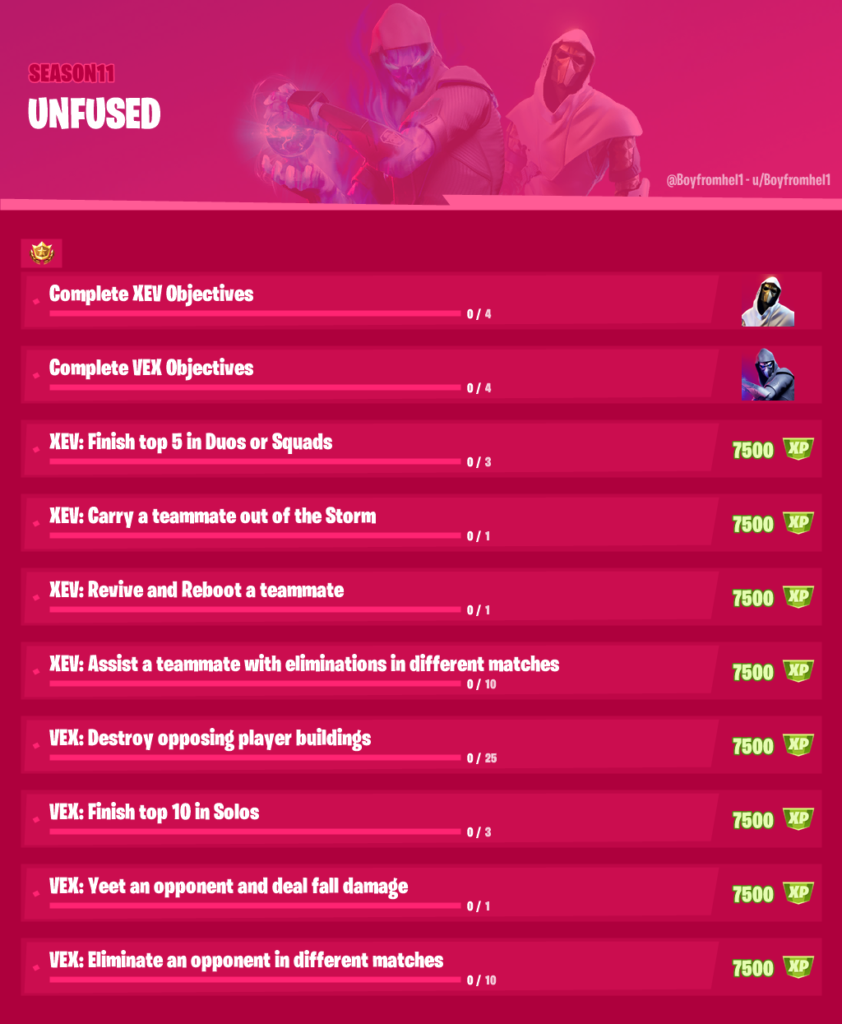 The Unfused Challenges are available for anyone who has reached tier 100.

Tier 100 skins typically have a variation in styles available for players to earn, and Chapter 2 is clearly no different as evidenced here.

There is still time to grind out your tiers to get to 100 and work on the Unfused challenges, as the first season of Chapter 2 has been confirmed to be extended to end in early February.

This will come after the rumored Risky Reels in-game event, which is expected to appear on New Year’s Day.

There is currently no clue as to what the next tier 100 skin could possibly be when Epic Games introduce Fortnite Chapter 2, Season 2.

In the past, Tier 100 skins have included the likes of The Reaper (commonly known as John Wick) and Black Knight skins, from seasons three and one respectively. Can they recreate something as iconic as these?