EA SPORTS have released a special Flashback SBC in FIFA 20 Ultimate Team (FUT) for Morrocan/Benfica midfielder Adel Taarabt, and we’ve got the requirements, cheapest solutions, in-game stats, and everything else you need to complete it.

The busy period in FIFA 20 continues with yet another Flashback SBC, which has become a staple within FUT, celebrating a player’s successful campaign either domestically, internationally, or both.

This latest one is for Adel Taarabt, who has received an 88-rated special card recognizing his stellar 2012/2013 season, during which he performed admirably for Queens Park Rangers despite the team finishing bottom of the table and getting relegated.

Over the years in FUT, Taarabt has always been regarded as one of the better dribblers in the game, and this Flashback card certainly pays homage to that. All six of his dribbling stats are 80 or above, including 94 ball control and 95 dribbling.

On top of that, he boasts great pace (88), shooting (86), and passing (89), and his 88 physical makes him a tough player to knock off the ball. The card also features five-star skills and a four-star weak foot, which are both ideal for a CAM.

The only real negative is the 70 stamina, which is definitely a concern. Those using Taarabt will probably want to sub him off at around the 60-65 minute mark before his stats really begin to deteriorate.

This Flashback SBC actually only requires one squad building component – an 84-rated team:

Here is the current cheapest solution, without loyalty or position-change cards, which is estimated to cost around 43,000 coins on PS4, 50,000 on Xbox One, and 43,000 on Origin. 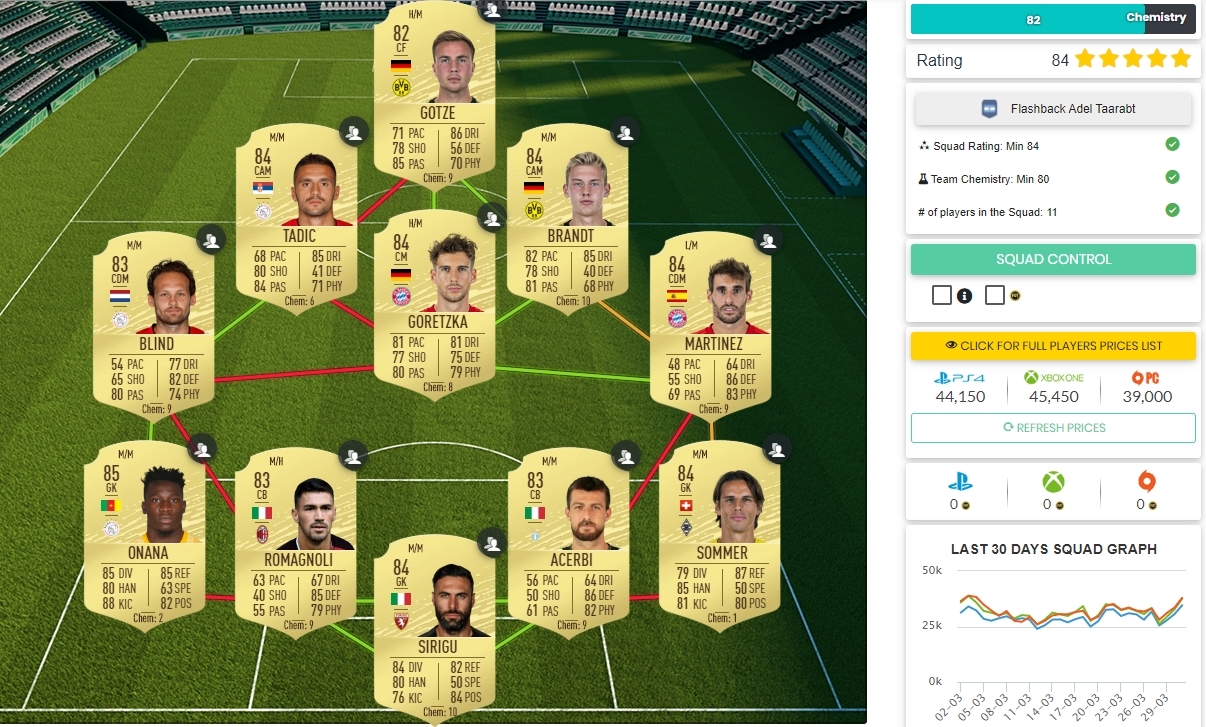 This solution for Adel Taarabt’s FIashback SBC is cheaper, but it needs loyalty on all players.

Of course, as is the nature of the FUT market, player prices are constantly fluctuating, so the cost of doing this SBC could go up or down depending on when you decide to complete it.

Is Taarabt Flashback SBC worth doing?

We’d highly recommend doing this SBC for a couple of reasons. First, the stats are very strong and near endgame level, and he looks like a very reliable CAM or striker, especially if equipped with a Hunter.

However, even if he doesn’t fit your squad or you have better players, it’s still an 88-rated card for pretty cheap, especially if you have stuff in your club that can further chip away at the price tag. Nowadays, with so many high-value SBCs floating around in FUT, an 88-rated item is likely to come in handy.

You better make your decision quickly though, as this squad building challenge expires on April 3, so you have less than two days to complete it before it’s gone.