A Twitch streamer under the username “TTV_MajesticUnicorn” sparked outrage across the net after appearing to “bite and throw” her toddler during a December 16 broadcast. Now, she has reportedly been arrested for the offense.

According to a December 8 Facebook post from the Calgary Police Service, a woman has been identified and arrested following local law enforcement’s investigation into the disturbing viral video.

Their post states that the 31-year-old woman behind the clip has been charged with one count of assault, and is scheduled to appear in court on January 17, 2020. Her children have since been “taken to a safe location.” 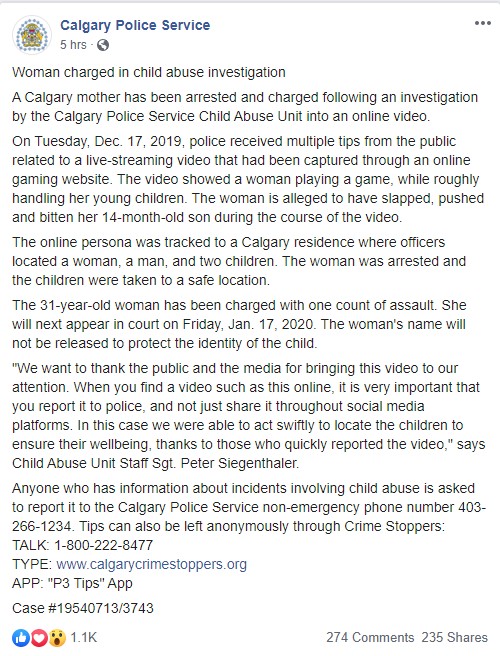 The Calgary police likewise encouraged those who witness such violence online to report the matters to law enforcement, writing, “In this case, we were able to act swiftly to locate the children to ensure their wellbeing, thanks to those who quickly reported the video.”

While Canadian news outlet CTV News has reached out to “MajesticUnicorn” for comment without success, the streamer appeared to address the issue on her now-deactivated Twitter account prior to her arrest. 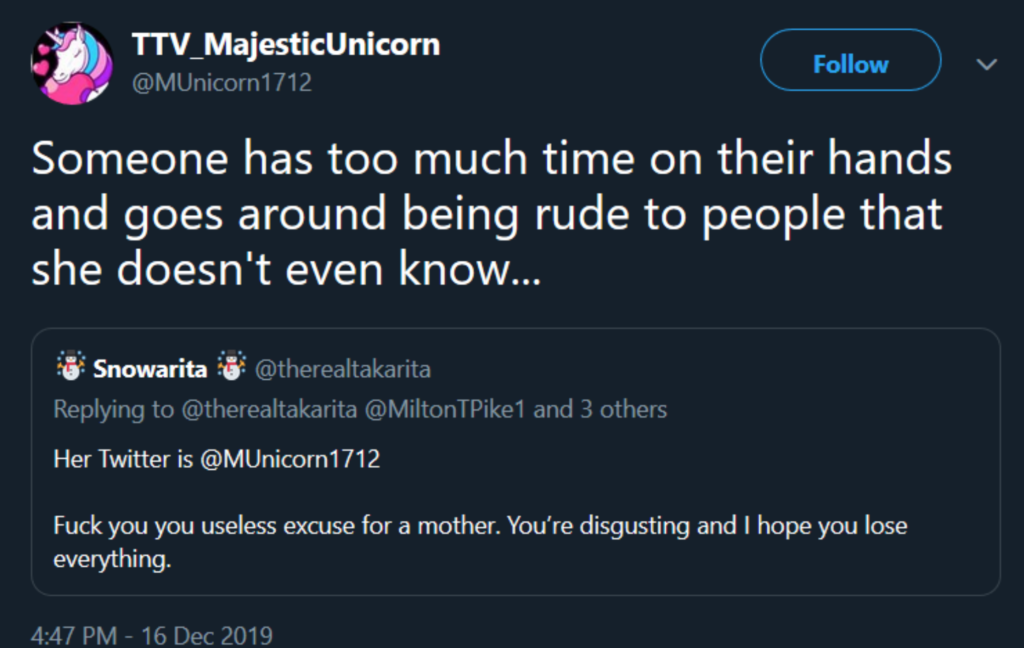 “Someone has too much time on their hands and goes around being rude to people that she doesn’t even know,” the streamer wrote in response to a post identifying her from the clip.

A description of the video claimed that MajesticUnicorn was upset with her toddler for interrupting her alleged “8-hour Fortnite session,” with the poster later confirming that the streamer’s Twitch account had been permanently banned with help from a community partnerships officer.

Hey @Twitch @TwitchSupport i'm sure on-stream child abuse goes against your ToS, right? Never in my life have I seen a mother bite and throw their infant around, let alone because they were disturbing their 8 hour Fortnite marathon. pic.twitter.com/juVz8QBVxu

Unsurprisingly, many viewers were shocked and appalled by the broadcast violence, with many calling for the aid of child protective services, among other organizations.

Although Twitch has come under fire as of late for its divisive moderation decisions, the platform took swift action against this serious issue. This was a welcome development for the children involved, who, thanks to the concerns of viewers, are now out of harm’s way.

UPDATE: Clips have also surfaced showing the father of MajesticUnicorn’s children (going by the username “Slickgary”) exhibiting similar behavior, with Twitter user “MiltonTPike1” claiming that they have gotten in touch with local authorities concerning the matter. The father’s Twitch channel has also been suspended.

Update: in less than 40 minutes, it appears the father's channel is now (at the very least) suspended. I got in contact with the Calgary Police and am now awaiting a phone call from the Child Welfare officer in charge of the case.

Stay tuned to Dexerto for future updates on this story.