Australian Fortnite YouTuber Lachlan Power was aiming to raise $10,000 in the aftermath of the bushfire crisis in his home country, and was left floored after Tyler ‘Ninja’ Blevins blew his goal out of the park with a huge $30,000 donation.

With bushfires burning out of control back home, Lachlan felt a need to step in and help raise some money. The Australian YouTuber is currently abroad in Japan right now, but dedicated his January 14 stream to helping raise money for charity.

With a modest goal of $10,000 set, the streamer was slowly ticking off milestone after milestone. However, even his wildest expectations were surpassed when Ninja joined the party, smashing his goal three-times-over with one donation. 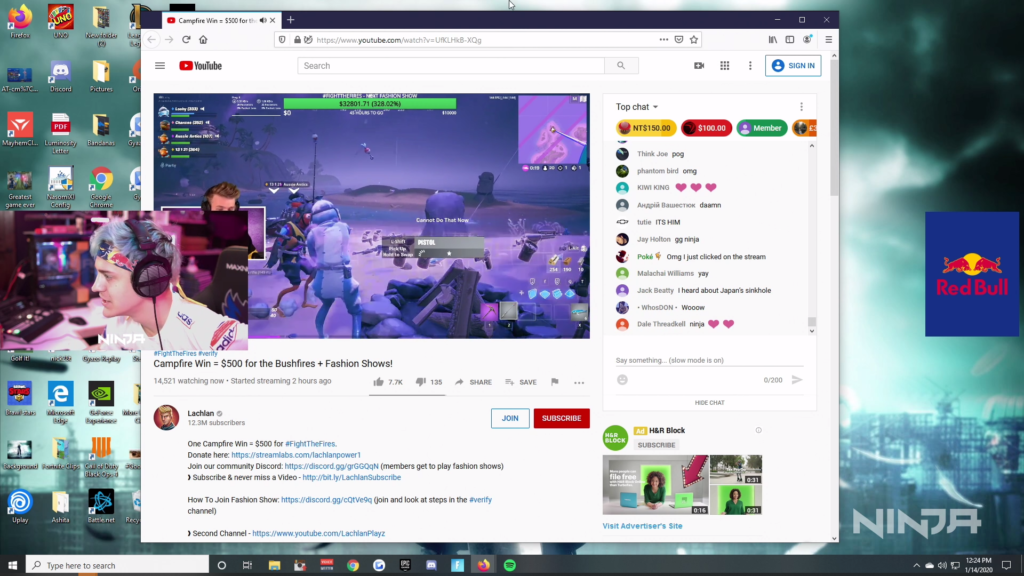 “Ninja has just donated $30,000,” he said, starting in shock trying to comprehend the massive donation the Fortnite phenom left. “I think that’s the real one, oh my god, you’re kidding. I don’t know what to say. I know he tweeted out that he wanted to do a lot for the bushfires and jeez I feel like that’s–that’s insane Ninja.”

That wasn’t meant to be Ninja’s only appearance on Lachlan’s bushfire stream though. He extended an invitation to the American to play a game or two, but he was busy with his own stream. If there is one way to decline an invite though, it’s with $30,000 to the cause.

Ninja, who was live on Mixer at the time, said that the donation he wanted to do was so big, his credit cards were declining payments. It took a few attempts to get through the mega donation, but once it came through, all he could do was smile and watch Lachlan’s reaction.

For mobile readers, the related segment starts at 2:06:44.

Ninja joins a host of superstars who have helped raise money for communities affected by the Australian bushfires. YouTube group The Click Crew raised over $300,000 AUD during a 36-hour stream on January 6, split between various charities across the country.

Developer-wise, Ubisoft Australia has donated $30,000 to the bushfire appeal, while Infinity Ward announced all proceeds from the Outback cosmetic set will be given to charity.

The Australian bushfire crisis has ravaged parts of the country, with over 27 million acres of land burned, 1,500 homes lost, and 28 people killed. They are still burning, with dozens of fires active in New South Wales, Victoria, Tasmania, and South Australia.

If you’d like to help people affected by the disasters, you can donate through the Australian Red Cross or the Salvation Army.