The Luminosity Gaming member is by far the most popular streamer on the platform, regularly topping leaderboards for hours watched.

However, so far in September another channel has replaced Ninja as the fastest growing on the site. The FACEIT TV account, which has been streaming the CSGO London Major, has officially overtaken the American, as shown by statistics gathered by TwitchMetrics. 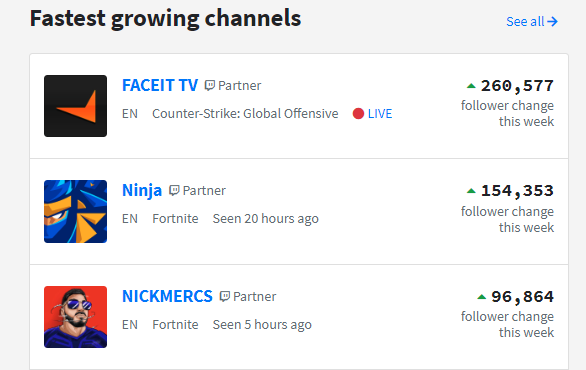 The metric for ‘Fastest Growing Channel’ is decided by follower change, so the more followers a channel gets, the higher up it will place. While FACEIT’s account is topping the leaderboard while the Major is on-going, Ninja’s channel is still second, and way out in front of its closest competitor.

Ninja has become the face of Twitch over the past year, thanks to his ever-popular Fortnite streams. Ninja still holds the record for Highest Peak Viewership of a solo streamer’s channel, with over 600,000 people tuning in to watch Blevins play with Drake.

He also receives high viewership due to his incredible skills in-game. Ninja won the Fortnite Pro-Am tournament at E3 while teaming with DJ Marshmello, and recently announced a new partnership with Red Bull Gaming.

While FACEIT reigns supreme at the top of the ‘Fastest Growing Channel’ leaderboards right now, it is likely that Ninja will return to the top once the CS:GO Major comes to an end.

Warzone streamer reveals must use attachments that completely eliminate recoil