With the victory, the pair got their very own majestic Golden Pickaxe trophy and, more importantly, secured the $1,000,000 grand prize for a charity of their choice.

After two warm-up matches were played, everyone’s attention and focus turned to the third and final match, where $3 million in charity prizes were on the line.

Entering the final stages of the match, Ninja and Marshmello were both alive and had an advantage of their two remaining opponents – popular streamers Jack ‘CouRage’ Dunlop and ‘KittyPlays’ – both of whom were on their own.

Although he managed to eliminated Kitty, CouRage’s 7 health and low position had him at an insurmountable disadvantage, and the winning pair took care of business to clinch the victory.

Prior to the third and final match, two matches were also played as a chance for all the players to warm up individually and together with their teammates.

The first match was in Solo mode and pitted all 100 participants against each other. Popular YouTuber ‘NoahJ456’ defeated Team Solary pro Fortnite player ‘Kinstaar’ in an epic 1v1 gunfight to claim the victory.

A launchpad, a rocket, and a dream! @NoahJ456 locks down the Game 1 win against @Kinstaar92i at the #FortniteProAm pic.twitter.com/DFhv8jiZfI

The second warm-up match was in the Duos Mode and featured everyone playing with their assigned teammate as each of the 50 duos looked to build chemistry ahead of the final match.

This time Kinstaar was able to clutch out the victory as he and his partner – UFC fighter and OpTic Gaming member Sean O’Malley – were able to overtake Ninja to gut out a hard-earned win.

.@SugaSeanMMA‘s strategy for future games GG’s as him and @Kinstaar92i get that Victory Royale at the #FortniteProAm! #Greenwall

The 2v2 Fortnite Pro-Am teamed up 50 of the biggest names in the Fortnite gaming community with 50 well-known celebrities who enjoy playing the game, including a variety of musicians, rappers, athletes and more.

Aside from the Golden Pickaxe trophy, the tournament also had whopping $3 million prize pool, all of which will go towards various charities of the players’ choices.

Here are the final top-10 placements for the money match of the Fortnite Pro-Am Celebrity Tournament, along with a breakdown of the awarded prize pool. 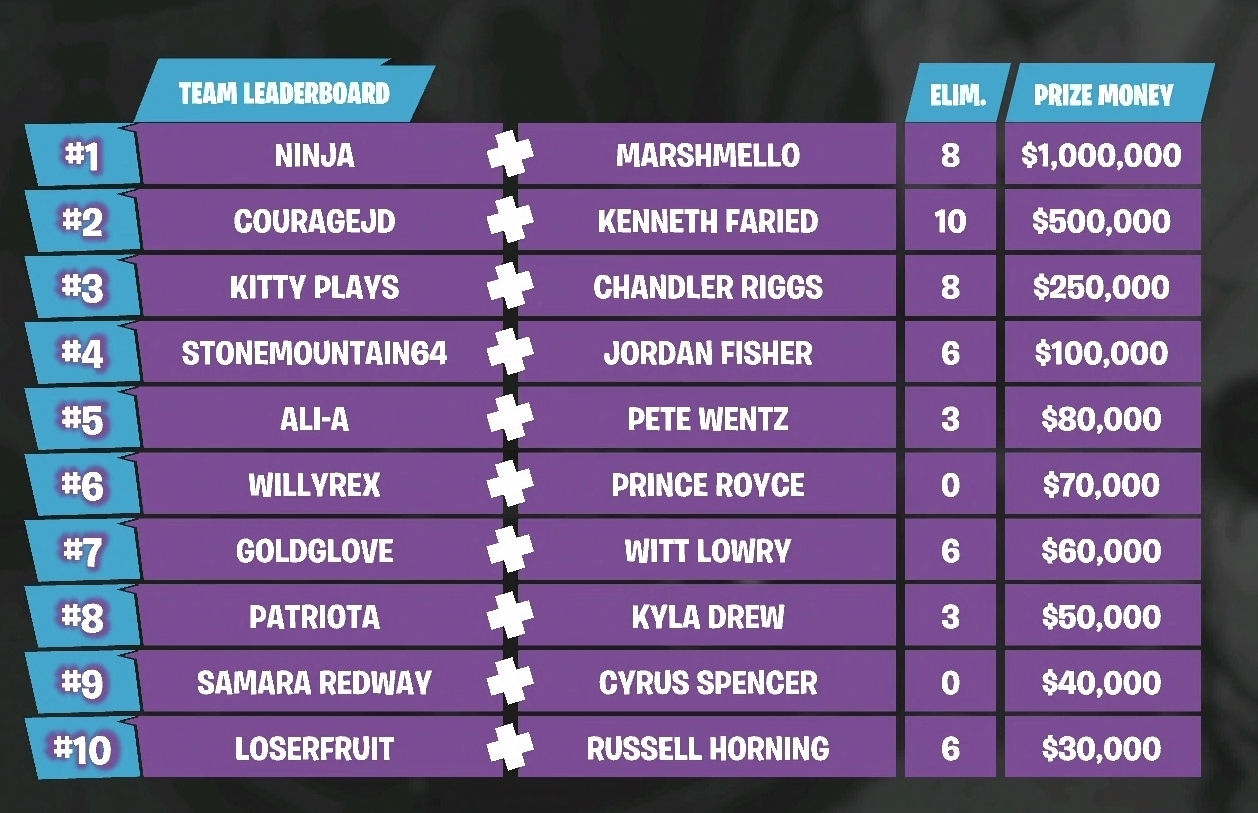