Daniel ‘KEEMSTAR’ Keem’s popular “Friday Fortnite” could be making a return in the near future, the YouTube star has confirmed.

In fact, as long as there are no last minute hurdles to overcome, the first installment of the competition could occur as early as September 14.

KEEMSTAR broke the news on Twitter, stating “I have 2 meetings lined up for #FridayFortnite tomorrow” and ”If everything goes as planned we will be playing as early as this Friday”: 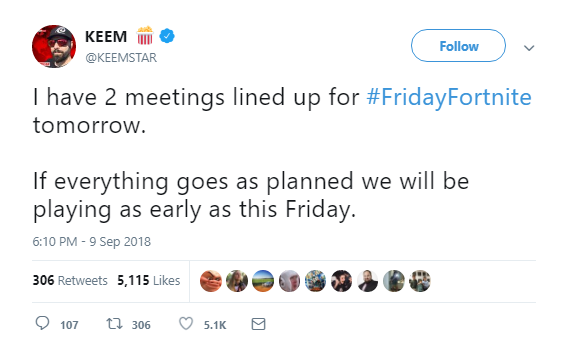 Friday Fortnite was one of the first Fortnite competitions to bring together the game’s biggest streaming stars and professional players, like Ninja, Tfue, Cloak and NICKMERCS, and it quickly became a massive hit.

However, scheduling conflicts with Epic Games’ “Summer Skirmish Series”, and Epic’s decision to cap Friday Fortnite’s prize money, meant that the popular event disappeared almost as quickly as it had popped up.

KEEMSTAR has been vocal in his criticism of the way that Epic Games handled the situation but also made it clear on a number of occasions that he intended to bring Friday Fortnite back once he could secure the right funding.

Now it looks like the Drama Alert host has (or is on the brink of) secured that funding, meaning that the weekly competition can return in full force.

Given his previous statements, fans can expect to see Friday Fortnite’s prize pool increased significantly compared to when Epic Games were working with KEEMSTAR.

With the Summer Skirmish Series officially over, Friday Fortnite should slot in nicely in its place and probably feel as though it never left.

Due to Epic Games’ recent announcement of their new ‘Fall Skirmish’ Fortnite competition series, KEEMSTAR has hinted that he may not be bringing back Friday Fortnite after all.

More details here – KEEMSTAR Explains Why Friday Fortnite is Unlikely to Come Back, Despite Fans Hitting His Retweet Goal