An IRL Twitch streamer seemed to be threatened by an alleged member of the notorious gang MS-13 during a January 8 broadcast.

California-based Streamer “jonsf” was walking down the street at night, filming himself and interacting with his viewers, when suddenly a woman off-screen asked him if he had a camera.

“What are you doing with that camera?” the pedestrian responded. After learning that jonsf was live streaming, the now-revealed woman began inquiring more about what exactly he was broadcasting.

As it turned out, she was alluding to the international crime gang Mara Salvatrucha, otherwise known as MS-13. After getting in nice and close to the streamer and claiming that neither South or North Koreans could join, she shouted MS-13 right in jonsf’s face.

“This is my territory!” she cried. “Get your Korean a** [inaudible],” she demanded before walking in the opposite direction, seemingly threatening the streamer – who isn’t even Korean to begin with. 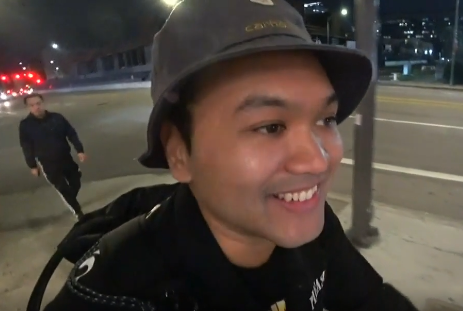 For his part, while speechless, jonsf was unfazed by the whole ordeal and resumed talking with his stream shortly thereafter.

Still, encountering a potential MS-13 gang member can be quite nerve-racking. According to a 2009 National Gang Threat Assessment, MS-13 has 8,000 to 10,000 members residing in the United States and as many as 50,000 members worldwide.

Their criminal activities include, but are not limited to, murder, human trafficking, kidnapping and larceny.