Popular YouTuber Jimmy ‘Mr Beast’ Donaldson has explained why he won’t be replacing the destroyed PC of a child who was tricked by an impersonator.

The streamer, known on the site as rogue07, was playing and broadcasting Fortnite from his $1,200 PC, when a Twitch user appeared in his chat pretending to be Donaldson.

The account claimed that if the child destroyed his PC, they would send him a brand new computer worth $5,000. Rogue07, believing this to be Mr Beast, proceeded to destroy his computer in a bathtub, before finding out that the Twitch user was a hoax account.

Since then, many have wondered if the YouTuber would offer to replace the PC for the child, as Mr Beast is well known for his generosity. This will not be the case, as Donaldson released a statement to Daniel ‘KEEMSTAR’ Keem explaining that he wouldn’t be able to buy the child a new PC, and why couldn’t do it.

“I feel bad about it,” wrote Mr Beast. “But unfortunately I don’t want to replace it and start a trend of people breaking things in hope of me fixing it.”

“If Twitch would simply verify me, this would all be fixed. I’ve gotten hundreds of millions of views from donating to people on their platform, so it makes no sense not to.” 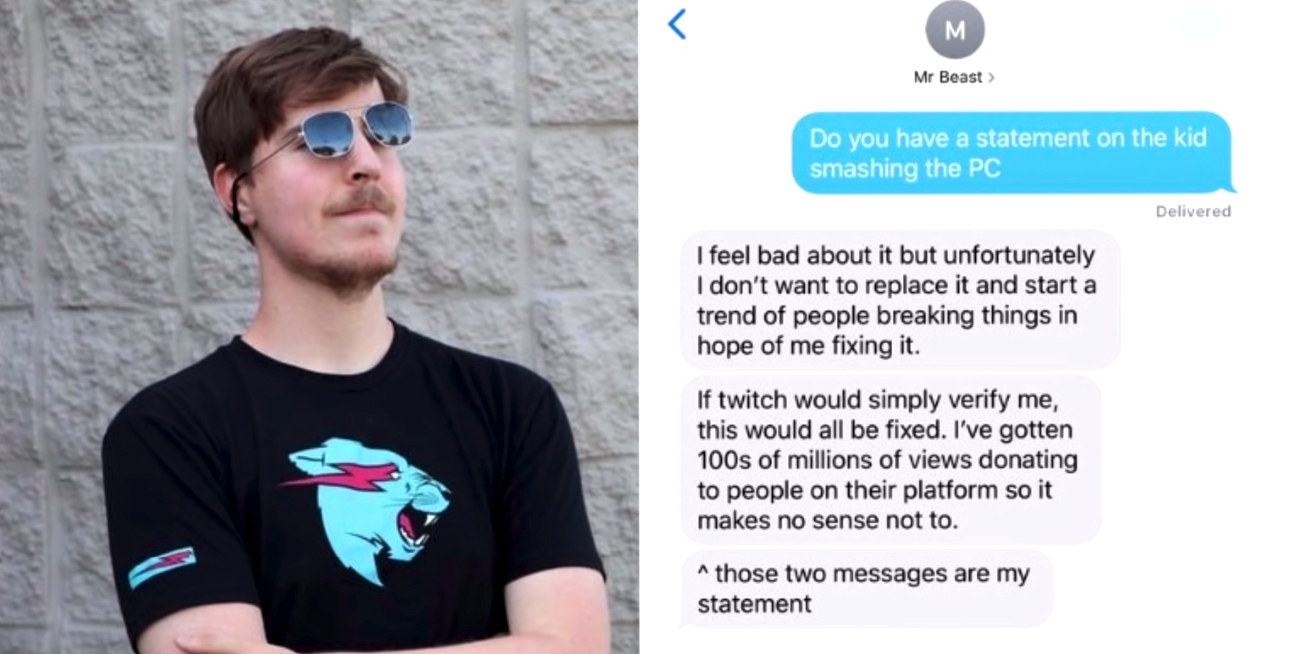 For the YouTuber, publically replacing the child’s computer may put him in a difficult situation, as some may attempt to take advantage of his giving spirit to profit off of him, and could also paint him in a bad light to some fans if another viewer fell for this trick and Mr Beast declined to fix it.

While Mr Beast will not be replacing the destroyed PC, the streamer’s mother posted on Twitter to confirm that she would be “fixing the situation.”

As stupid as it looks to most of you- my son and his friends thought this was some guy they follow- it wasn’t. We screwed up his PC- and it’s up to mama to fix the situation. That’s it! No need for all the videos and awful comments :smirk: